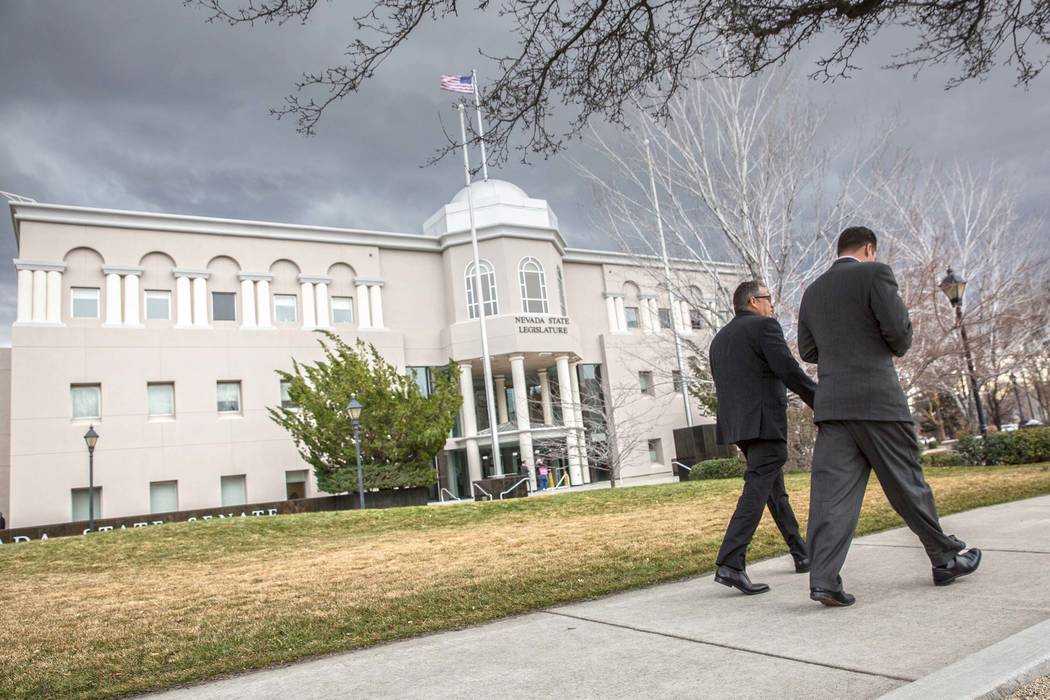 Benjamin Hager/Las Vegas Review-Journal The Nevada State Legislature building in Carson City. Democrats went into the 2017 Nevada Legislature with an agenda, and while they did not handle every issue deftly, most of them came out the way their base wanted, columnist Dennis Myers writes.

If the most sweeping Republican victory in Nevada since 1890 – here I’m describing the 2014 election – did not tell them anything, then the appointment of Donald Trump as president gave Nevada Democrats plenty of motivation, and it showed at this year’s Legislature.

Democrats in 2014 lost both houses of the Nevada Legislature and every statewide race.

When the Legislature went into session in 2015, Republicans did not waste their opportunity, pushing through proposals they could not achieve in earlier legislatures.

Some were so extreme that Democrats warned the GOP not to get too attached to them, that as soon as the majority shifted, those programs would be repealed. The Republicans did not take these warnings seriously. They were riding high and believed they had caught a wave.

The wave was short-lived. Reacting in part to the 2015 Legislative session, Nevada voters handed the majorities back to the Democrats while at the same time voting for Hillary Clinton over Donald Trump.

Democrats were dazed after their 2014 losses and were lethargic all through that year’s session. But while the appointment of Trump stunned the Democrats, this time they did not stay stunned. The angry public, which quickly went into the streets, showed them that this was no time to lick wounds.

Democrats went into the 2017 Nevada Legislature with an agenda, and while they did not handle every issue deftly, most of them came out the way their base wanted.

While Republicans in other states were using planned parenthood as a springboard to attack reproduction rights (Missouri’s governor is trying to scrape together a quorum for a special session devoted entirely to abortion), set up a state grant program for family planning services and put the women’s preventive health provisions of the federal Affordable Care Act into state law. This last includes birth control.

The lawmakers repealed a resolution that called on the federal government to turn public lands over to the state. This happened as Nevada’s U.S. Rep. Mark Amodei withdrew his own bill to transfer federal land to the state. Republican Amodei said it became apparent that the Nevada public did not support it.

For good measure, Democrats in the Legislature approved creation of a Public Lands Day in Nevada.

Net metering in Nevada was reinstated after the Public Utilities Commission – acting on instructions from the 2015 Legislature – killed it.

A school grants program that would have given $5,000 grants to parents who pulled their children out of public school was killed.

The grants were small enough so that they were effectively useless to low-income families since most private school tuition is higher than $5,000. But they were large enough to help subsidize affluent families. A Reno Gazette-Journal study showed that most applicants for the money came from upscale ZIP codes. The original program was enjoined by the courts and never went into effect.

Probably the most remarkable action by the legislators was enactment of a Medicaid-for-all health care plan. (Meanwhile, in D.C., Nevada’s U.S. Sen. Dean Heller was busily at work on phasing out Medicaid.)

At this writing, Gov. Brian Sandoval, a Republican, has not yet decided whether to sign the measure, but in some ways it doesn’t matter. If he vetoes it, he gives his party ownership of the state’s health care problems.

Meanwhile, the country outside Nevada is going nuts over this legislation, even though state news outlets have barely recognized its significance. “Nevada Is Considering a Revolutionary Health-Care Experiment” is the headline at New York magazine.

It was quite a session for the Democrats.

Dennis Myers is an awardwinning journalist who has reported on Nevada’s capital, government and politics for several decades. He has also served as Nevada’s chief deputy secretary of state.