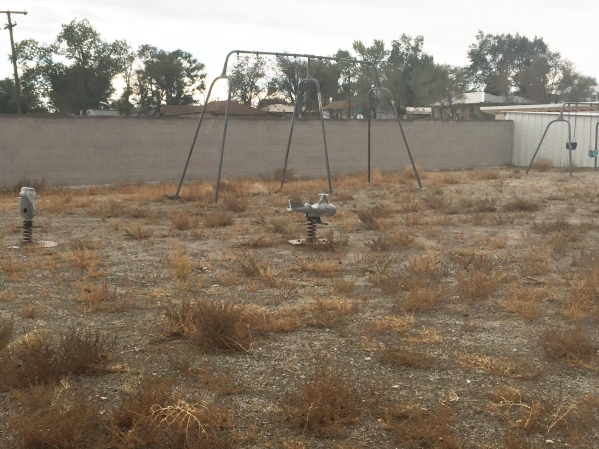 GABBS- Walking around Gabbs is like being in a town that time forgot.

The streets are mostly abandoned on this Sunday afternoon, except for a few children playing in a small park across from the school.

A school that has lost a few teachers since the year began two months ago, as well as a few students. I’m told the kindergarten through 12th grade school is down to 31 students in a town of approximately 260 people.

Across the school parking lot is the school’s gymnasium. “Home of the Gabbs High Tarantulas” the side of the building exclaims, with a giant spider painting from 1989 on the outside wall.

The gym doesn’t get much use these days. There is talk of a co-ed varsity wrestling team this year. The junior high might have enough players to put together a team again this year. Last year’s squad only had one home game.

The high school hasn’t had a basketball team since 2005. The green and white banner from the 1970 state championship harkens back to more prosperous days for the mining town.

Gabbs was founded in late 1941 as a company town for Basic Magnesium, which operated the magnesium production site nearby. Henderson found its initial growth during this time under the same company, even naming the high school Basic.

Gabbs boasted a police force, jail, and its own school district during the war. A library was built, city hall constructed, parks and tennis courts for recreation were installed. It even had a local newspaper.

When the original magnesium plant closed toward the end of the Second World War, population declined for the first time. But by 1955, the city incorporated on the reviving of the magnesium plant by a private company. By 1960, nearly 800 people lived in this remote outpost on State Route 361.

These salad days lasted until the plant laid off half its workforce in 1982, and by 2001 the town lost its incorporation status, falling under the governance of the Nye County seat in Tonopah approximately 110 driving miles away.

Gabbs location also puts it far away from economic possibilities, with many of the workers at the current plant choosing to live in Fallon nearly 80 miles away. Gabbs has one grocery store.

My walk around town brought echos of these days gone past. I wandered down to the football field and stood at the 50-yard line among the harsh desert landscape that had reclaimed the field. It was hard to imagine two state high school championship teams played on this field in 1960 and 1983. (I would be remiss if I didn’t mention the school also won a state volleyball championship in 1984, but I’m not sure if it was boys or girls).

Not far away from the school, up a set of broken steps, is a playground and community area that appears long out of use. Metal rocking rides and swings without swings populate the barren landscape. The horseshoe court is overgrown, and someone is trying to turn the dilapidated tennis court into a skateboard area. The town has no money to keep up the grounds, I was told.

Connected to this area is the community pool, which has been drained and now saw tall grass growing at the bottom of the deep end.

These are not the only areas of blight. A drive around town revealed many properties in disrepair, one series of residences gutted with everything from inside stacked in the yard: mattresses, appliances, furnishings, an old satellite dish. There may be ordinances against this blight in the town or county, but there doesn’t seem much money to enforce them.

One of the potential bright spots could be the relatively new community center. But a closer look reveals a mostly empty interior. I was told an area utility or wireless company had a grant to provide internet service and training in the building, but that money is scheduled to dry up early next year, forcing the doors to be chained if the town or private parties can’t come up with the funding. The county has already said it doesn’t have the money to help. After all, it is already cutting senior nutrition and health care because of its financial concerns.

Be careful what you wish for because the outcome might not be what you truly desire.