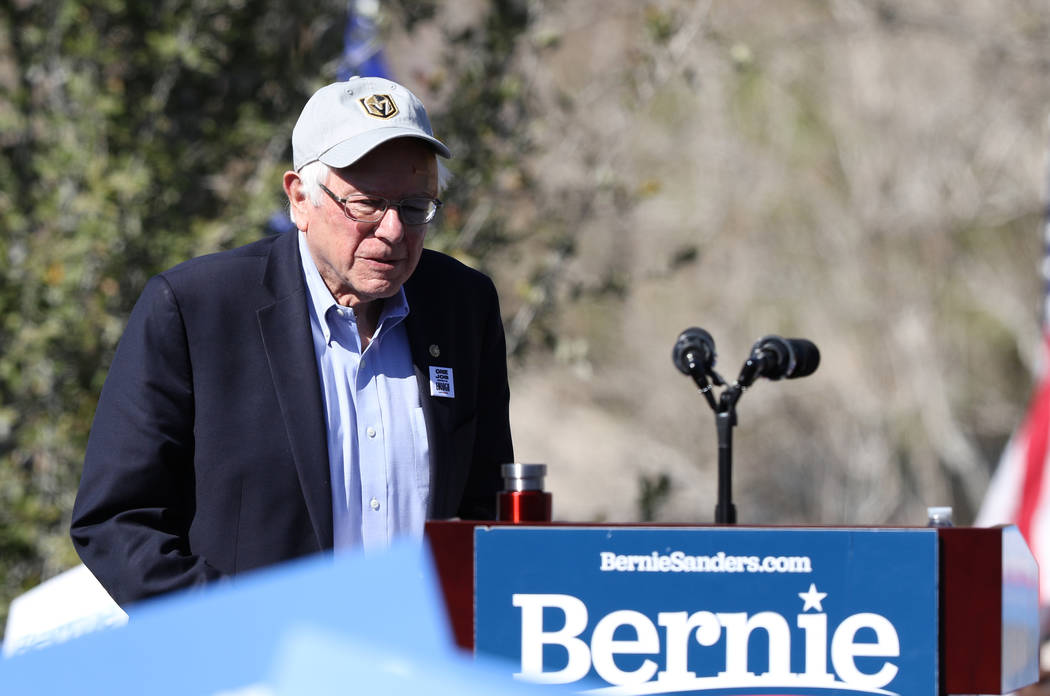 Heidi Fang/Las Vegas Review-Journal Democratic presidential candidate Sen. Bernie Sanders makes his way to the podium at a rally at Morrell Park in Henderson as part of his tour launching his presidential campaign, Saturday, March 16, 2019.

The title “Medicare for All” attached to health care legislation reintroduced in April by self-described Democratic-socialist Sen. Bernie Sanders (I-Vermont) is deeply misleading.

The label implies that the existing and successful Medicare system would be extended to all Americans. In fact, “Medicare for All” differs from Medicare in fundamental ways — with much broader coverage, no cost sharing and no choice of health care plans. Before settling on the brand name “Medicare for All,” proponents called it “Single-payer health care.” In reality, Medicare for All is another name for government-run socialized health insurance.

Sanders’ new bill is essentially unchanged from legislation he introduced two years ago. It would force virtually every person to give up their current health plan — whether private insurance, Medicare or Medicaid — for a single, one-size-fits-all, government-run plan. It would cover not only uninsured American citizens but every U.S. resident — potentially including illegal immigrants. He’s made the plan even more generous and costly by adding long-term nursing and home care — at an additional cost of approximately $3 trillion over the next decade.

According to studies from both the liberal Urban Institute and the conservative Mercatus Center, Sanders’ plan would increase federal spending by $32 trillion over 10 years. Even doubling all federal individual and corporate tax receipts would be insufficient to pay that cost. Sanders doesn’t offer a specific way to pay for the plan.

This enormous cost has been made evident at the state level. States could unilaterally enact a single-payer system, but even the most liberal — most noteworthy Sanders’ home state of Vermont in 2014 — abandoned the plan when the scale of associated tax increases became clear.

Medicare for All has 14 Democratic Senate co-sponsors, including four who are competing with Sanders for the 2020 Democratic presidential nomination: Kamala Harris, Cory Booker, Kirsten Gillibrand and Elizabeth Warren. Each is courting support from ardently left progressive Democrats. A House version of the bill, introduced by Rep. Pramila Jayapal (D-Calif.), has 107 Democrats as co-sponsors.

But Democrats are far from united on health care policy. House Speaker Nancy Pelosi and other establishment liberal Democrats are skeptics about costs of Medicare for All. They want to focus on improving President Obama’s Affordable Care Act. The party’s leading presidential contender, Joe Biden, says he would build on Obamacare, signed into law while he was vice-president. Senate Democrats Amy Klobuchar and Michael Bennet, both mainstream presidential aspirants, have never signed on to Sanders’ extreme single payer bill.

About 156 million Americans have private employer-sponsored health insurance plans and another 22 million seniors have private Medicare Advantage plans. They would all have to switch to government insurance. That fact is risky for proponents. Senator Harris drew attacks after telling a CNN town hall that she was for Medicare for All and that she would “eliminate all of that”, referring to the private health insurance industry. Harris later backtracked.

Medicare for All would replace Medicare’s current method of paying fees for services to every hospital, nursing home and other institutional providers. Instead, a new federal board would set an annual budget for each provider, which would receive one lump sum for current operations and another for capital expenditures. The goal would be to run not only health insurance but the entire health care sector.

Finally, Medicare for All would eliminate all plan choices. It prohibits any insurer or employer from privately offering any medical services covered by the bill — no competition.

Medicare for All would force a radical change in our current health care system –and it’s not built on the structure of the present Medicare program.