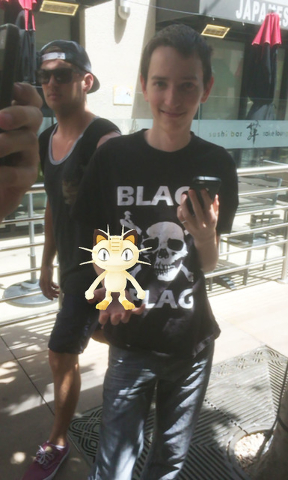 Sometimes kids say what needs to be said best.

Why cant people just be happy?

Those were the words Sunday from my 13-year-old daughter. She was talking in general about the recent violence in the news, specifically the dance-club shooting in Orlando. As someone who is on Twitter, Instagram and SnapChat, it would be hard for her to miss.

One of the people she follows on Twitter was talking about how his mother called him (hes gay and lives in Orlando) when news of the shooting broke. And when she couldnt reach him, the mother started calling his friends. He commented something about, isnt it sad we still live in a world that this type of violence happens.

To which my daughter said to me, Why cant people just be happy?

I agree with my daughter on that sentiment. There seems to be a lot of anger. It is as if our society is infected by a rage virus.

I couldnt turn on the television during the weekend when the Dallas police shootings were happening. I had already been shaken about the police shootings in Minnesota and Louisiana. Adding the sniper attack was just too much.

I had to make sure the television remained off, going against my natural instinct of voyeurism, and turn off my Twitter and Facebook feeds. It was all just too much. So much anger, so much fear, so much hate.

Ah, Facebook. I hardly go on Facebook anymore because there is so much back-and-forth about guns and politics. People posting opinions, arguing against each other, but no one really listening.

The general anger of the FBI not criminally charging Hillary Clinton. The anger of Bernie Sanders supporters. The anger around and by Donald Trump in general.

Social media can be truly exhausting.

One thing that seems to bring people happiness is the new Pokemon Go craze. Im sure youve read about it, or know someone who is swept up in the mobile game released late last week. You may have seen people, mostly teenagers, with their mobile phones out in strange places.

Pokemon was created 20 years ago in Japan as a video game, but has expanded into TV shows, card game and movies. It is about collecting these various creatures to fight bigger creatures. Or that was how a teenager explained it to me.

Now it has been moved to mobile devices such as iPhones, using real-time GPS locations for people to capture these virtual creatures out in the world. From the point of view of someone who is the father to one teenager, and stepdad to two others, Im thrilled there is finally a video game that gets them out of the house, exercising and interacting with others. Instead of sitting in the house all day playing XBox, the past three days Ive come home, one stepson has been at the nearby park with friends playing this Pokemon Go game.

See, people being happy in a shared experience.

Another thing that can be done is pictures of the virtual creatures can be taken on the mobile phone as if they were in the real world. All three of the teenagers in my life spent time Sunday in Town Square in Las Vegas hunting Pokemon (if thats the right way to say it) and taking pictures. We werent alone. It is pretty easy to tell who else is using the game.

Now I know there has been some controversy (people using the game in the Holocaust Museum as an example), and identity theft concerns, but common sense and vigilance can overcome both.

While we were chasing Pokemon creatures around Town Square, we heard loud honking and yelling. One vehicle then sped around the other in the shopping district right in front of us. Both drivers then jumped out of their vehicles and started yelling and posturing.

There were a few seconds where onlookers didnt know which way this was going to go. Fortunately, they got back in their vehicles and drove away, and we went back to hunting Pokemon creatures.

Why cant people just be happy?