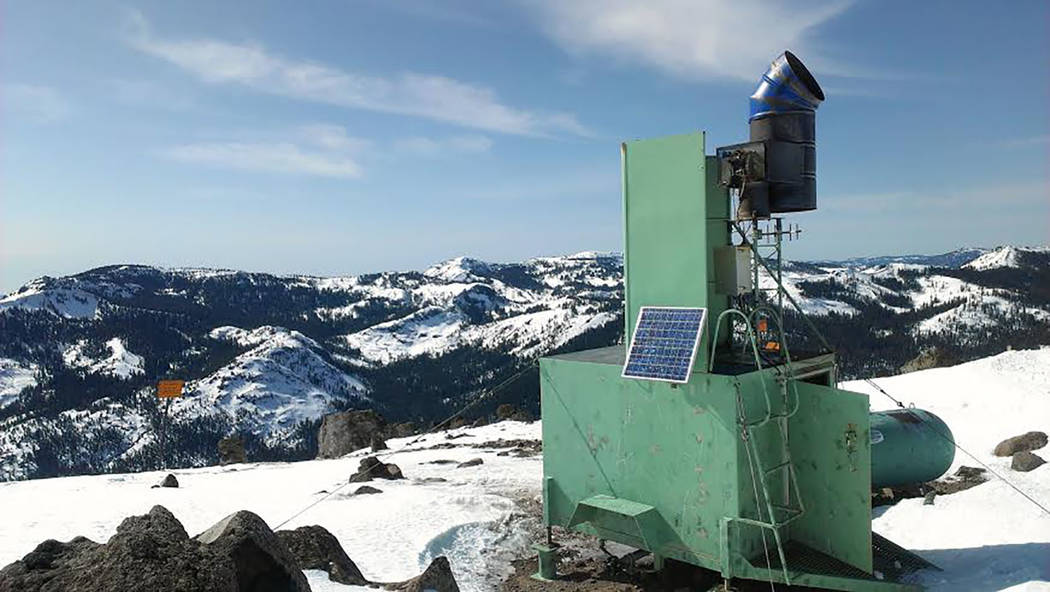 Special to the Pahrump Valley Times A DRI photo shows the Sierra station. The ground-based cloud seeding stations help produce additional snowpack in the Sierra Nevada mountains and can be operated remotely during storms.

When a reporter investigates an issue, there should be no bias. A biased report is one that prints only one side of the story. We the people deserve both the pros and the cons for a complete and honest report. Do you really think the DRI would say anything negative about their own project?

Statements like “silver iodide is not harmful at all” yet no mention of what the “added chemicals” can do is not giving us a complete picture. Has the opposing side been consulted and if so, where are their remarks?

You can seed clouds but have no control over the wind!

Perhaps “climate changes” can be attributed to these researches going on for 40 years. That’s about the time all of this ‘climate change” stuff started!

The report said research would be done through the winter months? March, April, and half of May hardly fit as “winter” months in the desert!

By the way, on a national security side … all it would take is for one person to add a bio into the mix and we could all be sicker than we are now! Who are the overseers?

Are we being duped?

No doubt, many readers of the Pahrump Valley Times were intrigued by the comments of former Nye County sheriff Anthony DeMeo (PVT 2/2/18). His critique of Sheriff Sharon Wehrly’s speech at the graduation ceremony for newly appointed deputies may have given pause to some. I didn’t attend that event, but I have no reason to fault Mr. DeMeo’s assessment.

Was Sheriff Wehrly merely trying to instill confidence among new law enforcement officers as they begin careers filled with great responsibility and risk? Or was she manifesting a point of view that these young deputies should take literally? On balance, I can well understand Tony DeMeo’s concern that the wrong message was sent.

In my own experience during more than 20 years in law enforcement and corrections, the final words given at the conclusion of various training programs never hinted that our authority should be used to intimidate. Rather, it was stressed that good communication skills can often make the difference in how a situation is resolved. The theme? Do your lawful duty, but always try to de-escalate tense situations before resorting to sterner measures. I sincerely hope that current law enforcement trainees are receiving such instruction.

Certainly, the residents of Nye County wish great success for our “new centurions.” And may they always strive to do the right thing.

Reader skeptical of both GOP and Democrats

Mr. Ferrell seems totally obsessed with this concept of being either on team “R” (the bad ones) or team “D” (the good ones).

I prefer to be skeptical of both teams, because after all, according to the form of government we STILL are fortunate to have inherited, responsible for giving these “teams” power to govern us.

One thing is certain in human nature, it’s always been easier to spend other people’s money rather than your own and Obama certainly was no exception to that.

Mr. Ferrell should be thrilled with at least one part of Trump’s agenda, that he will only give foreign aid to countries willing to reciprocate our goodwill, not just send pallets of money so they are just willing to talk about a “deal.”