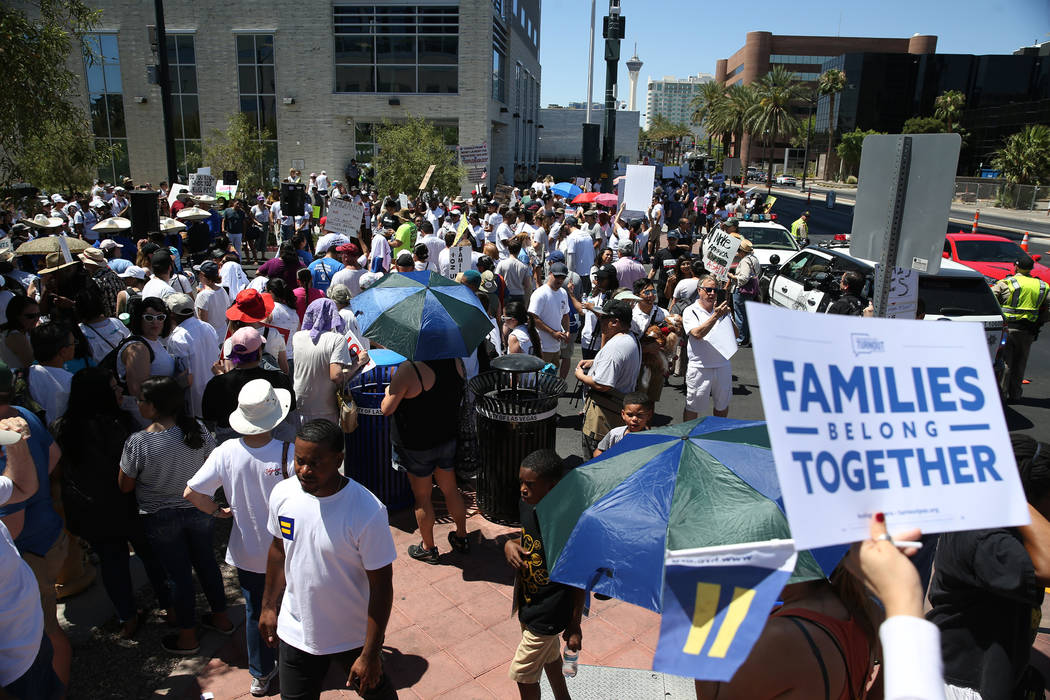 People participate during a rally against the separation of immigrant families outside of the Lloyd George U.S. Courthouse in Las Vegas, Saturday, June 30, 2018. Erik Verduzco Las Vegas Review-Journal @Erik_Verduzco

Adults with children caught crossing the border illegally should be released into the country if they claim asylum. A physical barrier wouldn’t deter border crossings, and Republican efforts to outlaw family separation aren’t worth supporting.

That’s according to Hardeep “Dee” Sull, a Nevada attorney who’s part of Lawyer Moms of America.

In 2016, the 9th U.S. Circuit Court of Appeals ruled the Flores Settlement, which the court imposed in 1997, required the government to release accompanied minors within 20 days.

Under President Barack Obama, the federal government began releasing illegal aliens with children who claimed asylum, because asylum claims generally take much longer than 20 days to resolve. In April, the Trump administration started holding parents for illegally crossing the border while reviewing asylum claims. Sull called for a return to Obama’s catch-and-release policy.

“In the past, just so the viewer knows, that’s what we have done,” said Sull while filming Nevada Politics Today. “We’ve released them to a next of kin or someone that the agency has vetted. But usually, it was somebody that there was a blood relation to.

“It’s worked in the past. There’s no reason to have de facto internment camps.”

Asked if she though catch-and-release would create a perverse incentive to bring children, Sull said, “No, I don’t. I think that quite honestly, if we pick up country condition reports, in certain countries like El Salvador, Honduras, these countries have violent, violent conditions that are going on. Mothers don’t have a choice.”

A Department of Homeland Security report that criminals are kidnapping Central American children and using them to help adults illegally gain entry into the United States “concerned” Sull. DHS found those “children are vulnerable to labor or sex trafficking.”

“It bothers me that that can happen, but we cannot foolproof the entire system,” said Sull. “We’re unable to do that even at this point.”

Trump would argue these are reasons why the country needs a physical barrier along the border, but Sull disagreed. “The wall, statistically, isn’t going to deter anybody,” she said. “Think about how vast this country is.”

“No, I think that’s a cop-out,” she said. “The legislators should have … long ago … created a solution that was workable with the best interests of the child, at the same time upholding our Constitution and our treaty obligations, and we’ve not done that.”