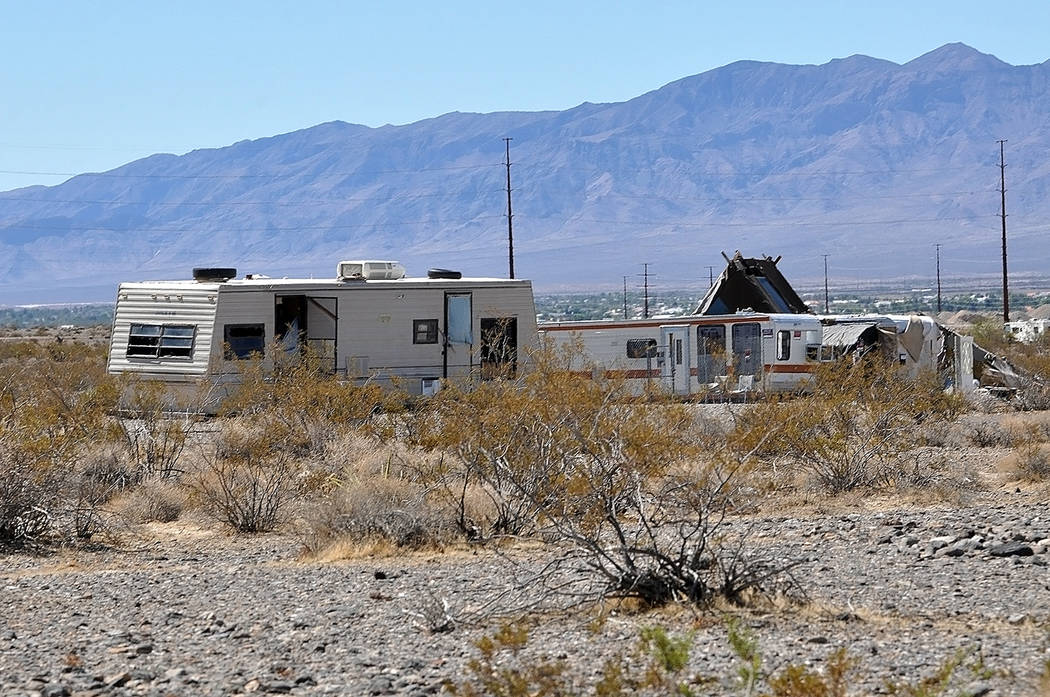 Horace Langford Jr./Pahrump Valley Times A homeless camp off East Basin Avenue in Pahrump as shown in a September 2018 photo. While the majority of homeless in Nevada are near the major population centers of Reno and Las Vegas rural counties like Nye have their share of homeless, columnist Tim Burke writes.

Editor’s note: This is Part 2 of local columnist Tim Burke’s look at homelessness in our community. See Part 1 in the Dec. 14 Pahrump Valley Times or on pvtimes.com

Is there a solution to homelessness?

For most people that become homeless, it is a temporary circumstance brought on by loss of a job, lack of affordable housing, a physical issue, escaping violence, or a relationship breakdown. If they are provided stability with temporary housing and services, they will generally be able to reintegrate themselves back into normal society and not stay homeless.

The U.S. Department of Housing and Urban Development estimates that anywhere from 10 to 20 percent of the homeless population are chronically homeless. In Nevada, they estimate that there are more than 500 individuals chronically homeless each day. Once someone becomes physically, mentally, or emotionally disabled, getting out of homelessness becomes extremely difficult.

While the majority of homeless in Nevada are near the major population centers of Reno and Las Vegas, rural counties like Nye have their share of homeless. The same issues that create homelessness in the big cities exist here. Rural counties have even less ability to help the homeless with smaller budgets and far less available resources.

The cities are working on solutions by focusing on providing housing. “Tiny houses” are in vogue in certain areas and while helpful, they focus on traditional methods of treating homeless with programs that have strict rules regarding alcohol, drugs, and behavior.

The model for dealing with the chronically homeless has been to get them “ready” for housing by guiding them through drug rehabilitation programs or mental-health counseling, or both. If and when they stopped drinking or doing drugs or acting crazy, they were given heavily subsidized housing on the condition that they stay clean and relatively sane. While that seems on the surface to be a reasonable approach, in reality, a homeless person needs a stable home before they can successfully be treated.

Self-directed communities may offer the most promise for helping the chronic homeless. These communities allow the residents to exert control over how the community is managed and maintained. They allow residents to build a sense of community and pride, which helps their own self-confidence.

Recently in Pahrump, a group of homeless that were camping on the east side of town on private property were forced to move because the property owner filed a legitimate complaint. Many of the comments from the individuals that had to move talked about how that area was “their community” and that they looked out for each other.

You may be reading this and thinking to yourself “I worked hard all my life and not so I can provide housing for some homeless bum.” Fair enough. I have thought that on more than one occasion myself but taking a harder look at what homelessness costs our society might change your viewpoint, at least a little.

The Nevada Homeless Alliance reports that it costs a community $73,542 at current costs to a community for one chronically homeless person to continue frequent use of public resources vs. the cost for one year of housing for one chronically homeless person. That $73,542 directly impacts your quality of life and is over $51,000 more than providing housing. You are paying for it now, you just don’t see it as a direct payment.

So, what can rural areas do for their homeless? Here in Pahrump, we have left the problem to local civic groups and churches. And they have done an admirable job with limited resources, but more needs to be done. A centralized resource information center could be established that could coordinate the various civic and church efforts.

Grants could be pursued to fund the center and bring additional resources to the area. Perhaps reach out to already successful programs to see if they would be interested in partnering with our community. Or we can pretend it doesn’t exist and let the problem continue to plague our community.

Most people who are homeless do not want to be. Some are forced into it by temporary circumstances, others by mental health, addictions, or disabilities. Virtually all would welcome a little kindness and help to get them back on track.