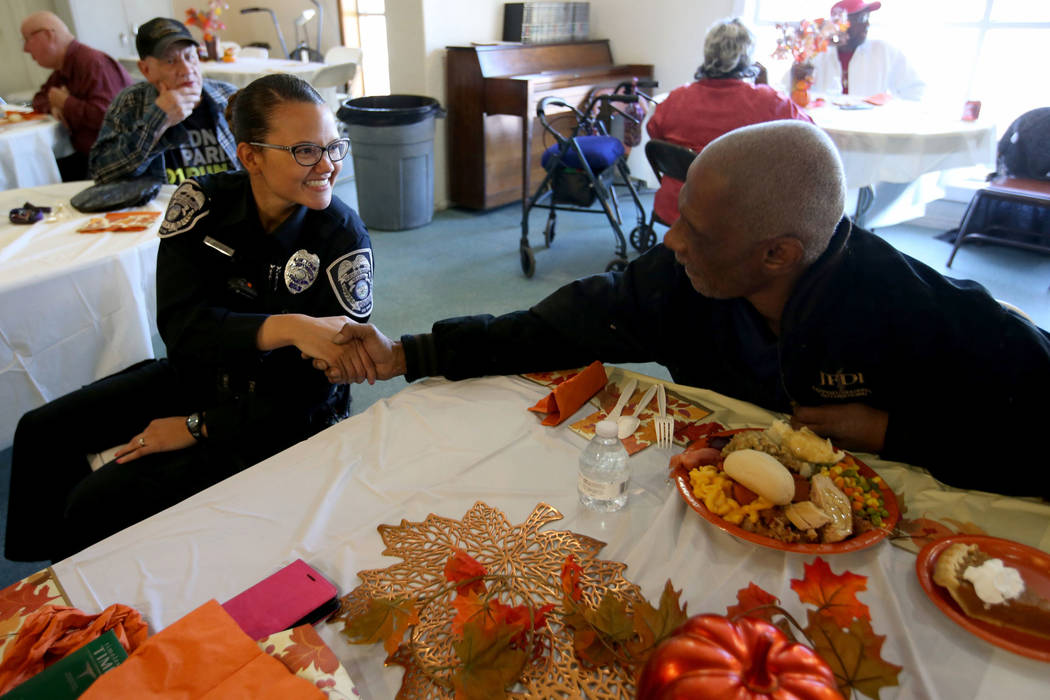 K.M. Cannon/Las Vegas Review-Journal It's helpful to reflect on what the Thanksgiving holiday is about, columnist Tim Burke writes.

The Thanksgiving holiday is traditionally the time of year when we gather to give thanks. Families will gather to spend the day visiting, feasting on turkey and stuffing, watching football on TV, and planning their Black Friday shopping strategies. Every family has their own traditions they follow.

Our family starts with a traditional breakfast of bacon wrapped eggs cooked in muffin tins, fresh blueberry muffins with creamy butter and hot chocolate. Our Thanksgiving dinner will be at one family member’s house and all the families will bring a dish to share. Dinner will include all the traditional Thanksgiving dishes and in our multicultural family, we will have some dishes native to other countries as well to share.

While we often think of it as a purely American holiday tradition, many other countries celebrate a similar holiday at various times of the year. Our neighbors in Canada celebrate their Thanksgiving on the second Monday in October to celebrate the harvest and other blessings of the past year. According to some historians, the very first Thanksgiving celebration in Canada was held in 1578. Other countries that have a Thanksgiving celebration include Germany, Great Britain, India, Japan and Australia.

The first documented Thanksgiving services in what is now the United States were conducted by Spaniards and the French in the 16th century. We can trace our Thanksgiving holiday tradition to a 1621 celebration at the Plymouth Plantation, where the settlers held a harvest feast after a successful growing season.

Squanto, a Patuxet Native American who resided with the Wampanoag tribe, taught the Pilgrims how to catch eel and grow corn and served as an interpreter for them. Squanto had learned the English language during his enslavement in England. The Wampanoag leader Massasoit had given food to the colonists during the first winter when supplies brought from England were insufficient. The Pilgrims celebrated at Plymouth for three days after their first harvest in 1621. The celebration included 50 persons who were on the Mayflower and 90 Native Americans.

Thanksgiving in the United States has been observed on various dates throughout history. From the time of the Founding Fathers until the time of Lincoln, the date Thanksgiving was observed varied from state to state. The final Thursday in November had become the customary date in most U.S. states by the beginning of the 19th century, coinciding with and eventually superseding the existing holiday of Evacuation Day (a day commemorating the British exit from the United States following the Revolutionary War).

A modern Thanksgiving holiday was first officially called for in all states in 1863 by a presidential proclamation of Abraham Lincoln. On Oct. 31, 1939, President Franklin D. Roosevelt signed a presidential proclamation changing the holiday to the next to last Thursday in November, for business reasons (and perhaps the beginnings of Black Friday!). On Dec. 26, 1941, he signed a joint resolution of Congress changing the national Thanksgiving Day from the next to last Thursday in November to the fourth Thursday.

In our current world of hyper politics, natural disasters, deadly fires, mass killings, and intrusive smartphones bombarding us with information that we don’t really need, it’s helpful to reflect on what the Thanksgiving holiday is about. It’s about stepping back for a moment and giving thanks that we are to be able to gather peacefully without persecution.

To be able to speak freely without fear of government control. To be able to freely pursue our individual goals and ideals. It’s about giving thanks to those who sacrificed much to give us those freedoms. It’s about being thankful to be able to live in the greatest country in the world. Happy Thanksgiving!