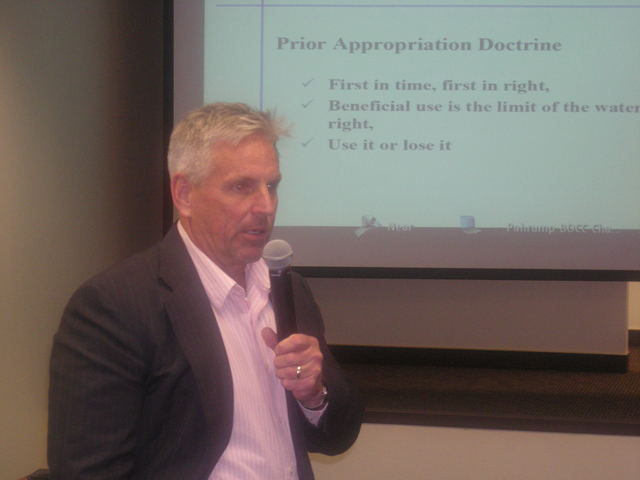 Water is front and center in terms of hot topics for our area. But is the issue real or is it a discussion of theoretical worst-case scenarios? Is there a better way to solve this problem than the recent heavy-handed order that the state engineer has issued to Pahrump landowners?

To summarize the discussion, according to the state engineer, Pahrump is currently overallocated in existing domestic well water rights. Further complicating the matter is that potentially there could be approximately 8,000 new wells drilled on parcels that currently have no water source. Theoretically, if you combine the existing wells with the potential new wells they would add up to over 60,000-acre-feet of water rights.

The annual ground recharge of water back into our aquifer is estimated to be between 20,000 to 25,000 acre-feet. Therefore, if each well pulled out of the ground the maximum amount of water allowed, we would have an annual deficit which would mean wells could go dry as the groundwater level receded.

Two acre-feet per household is a lot of water. Many studies have been done regarding average household water usage and statistically, it has been shown that a family of four uses less than half an acre-foot of water annually. Factor in large lots with landscaping, pets, and livestock, and you could potentially get to .75-acre feet, perhaps even one acre-foot of annual water usage per household. In practical terms that means two acre-feet per well is two to four times the amount of water actually needed for a household.

Perhaps the state engineer should consider using a model that energy and water utility companies have utilized with good success. Those companies reward customers financially for voluntarily switching to low-energy appliances and replacing lawns with water-efficient landscaping. A system could be created where current well-owners could voluntarily sell a portion of their water rights back to the state and the state would then retire a portion of those water rights, which in turn reduces the overallocation.

If you are using one acre-foot or less and you can sell a half acre or a full acre-foot back to the state it would be a viable option for current well-owners with financial benefits and have minimal impact on their quality of life. Then remove the water rights purchase restriction on new well-drilling but set a limit of a half-acre foot of water rights with a meter.

If the state cannot or would not fund a buy-back program, require that new well-owners must purchase a half-acre foot of water rights from the state before drilling. Charge new residential wells a fixed rate for the state-controlled water rights that is equal to but not greater than what the state pays existing well owners for their rights. If additional water rights are desired, the landowner can purchase those on the open market. This would cut the impact of new wells on the overallocation problem and still allow those property owners to develop their property as they so desire without excessive financial hardship.

What the state engineer has done is pass the issue of overallocation of water rights to landowners that want to drill a new well, but they have done so without putting a mechanism in place to help resolve the issue. The landowners did not create the current system and the water allocation problem, state law did. Yes, the state engineer by law has the authority to restrict water usage and water rights but in so doing has created havoc for landowners, the town, and property values.

Of course, the state will never go for it. It would cost the state money to implement a program to buy back overallocated water rights. In addition to asking for a budget to buy back water rights from existing well-owners, the state would have to pass new laws and regulations adding complexity, time, and more government layers to an already complicated issue.

The recent order by the state engineer is not a satisfactory solution for Pahrump and its residents. Until a better solution is in place be prepared to hear about water during elections for many more years.