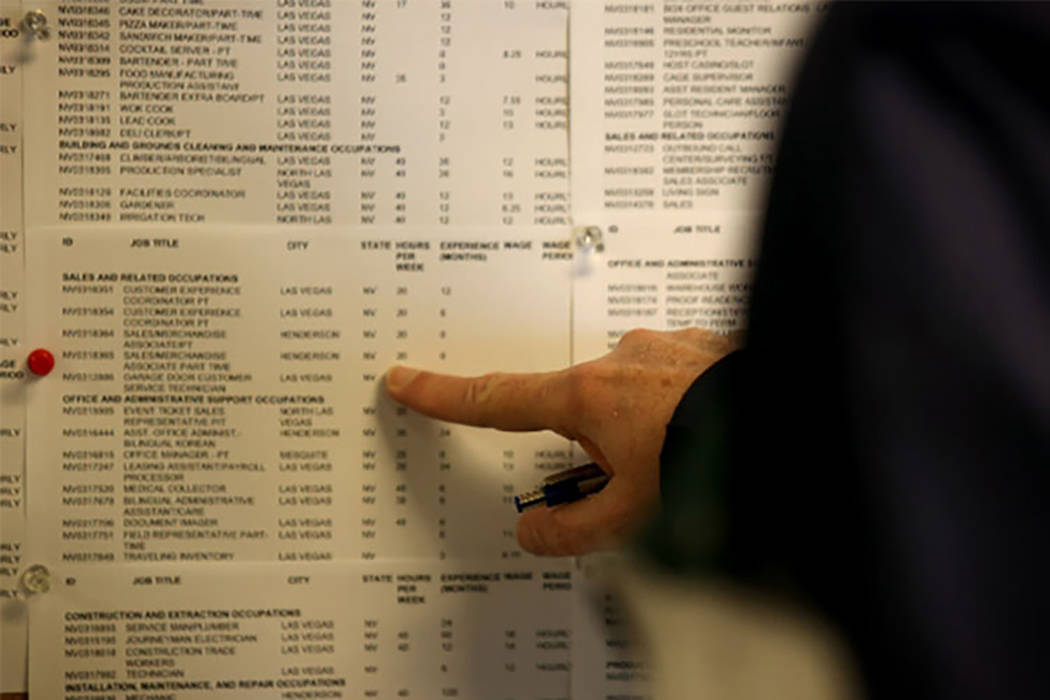 Las Vegas Review-Journal A man who asked not to be identified looks at the employment board at Nevada JobConnect in Henderson. Nevada's unemployment rate is at a seasonally adjusted 4.7 percent for April 2017, officials said.

The prospects of finding a job in Nevada have improved significantly since 2010.

In May, employment in the Silver State increased on a year-over-year basis for the 77th month in a row, said Bill Anderson, chief economist for Nevada’s Department of Employment, Training and Rehabilitation. Nevada has added 35,000 jobs since this time last year, a growth rate of 2.7 percent. But Nye County’s unemployment rate is higher than the state average, hovering around 6 percent, as per the U.S. Bureau of Labor Statistics.

According to the governor’s office, the largest employment gains in 2017 and 2018 statewide will occur in construction, trade/transportation/utilities, professional/business services, health care and leisure/hospitality.

To meet the need for a trained labor workforce the governor’s office has directed that the Nevada Workforce Development agencies concentrate training efforts in those high in-demand occupations. Through partner agencies, the Nevada Department of Employment, Training and Rehabilitation will fund training programs delivered by their training partners for unemployed Nevada residents.

Regionally, Reno has been able to diversify its economy with warehousing, trucking, and manufacturing. Reno is also attracting a significant number of jobs in technology fields. Companies from California are moving divisions to Reno for the lower cost of living and increased recreational opportunities.

Las Vegas has also had some success in diversifying its economy with warehousing, trucking, and manufacturing but the primary job areas for Las Vegas remain focused on tourism and supporting those that work in that industry. When you are the gaming capital of the world it is much harder to attract other types of industry that would compete for workers against the glamour of the Vegas casinos.

Pahrump too has changed over the years to meet the challenges of the job market. For a time, Pahrump residents were able to work at various government installations around the area. As those installations downsized, those jobs evaporated. Much of the interest in the possible revival of the Yucca Mountain Repository is in the hope that some of those types of jobs will return.

Many residents of Pahrump now choose to commute to work in Las Vegas. Having a city of two million residents only an hour away gives you a large variety of possible careers and you can still escape back to your rural home each evening.

Another option has now become possible for residents with the installation of high-speed Internet throughout Pahrump. It allows residents to be able to work from home. Many companies now offer the ability to telecommute to work and you only have to go into the office occasionally.

Perhaps you are a web designer, an IT consultant, work in cyber security, advertising and marketing, or some other career field that can be done from home. High-speed Internet also opens the door for technology companies to look at Pahrump as a location for their business. It’s only a matter for time before someone starts a tech start-up incubator in Pahrump.

In Pahrump though, we do not have many of the governor’s office defined “in-demand” occupations that Reno and Las Vegas have. There are no large warehousing operations here even though some of the infrastructure needed to support them does exist like large open tracts of land, inexpensive housing, and a labor force.

The drawbacks are that we do not have easy access to a major Interstate and we do not have a railroad. Nor are there a large number of trucking companies here for the same logistical reasons as warehousing. You might perhaps call the marijuana grow houses our version of manufacturing but there is very little manufacturing beyond that. What we do have are a good number of jobs in the service industry and health-related fields.

There are jobs available right now in Pahrump. A recent search on Google came up with over 100 job listings across a variety of career fields. Openings in the service industry include store clerks, food service, and sales. The health care field has openings in nursing, lab techs, front office administration, home health care, and counseling services. There are jobs listed for both entry level and for management positions. But there are not a lot of diverse options in career fields to choose from and that can limit your career choices here.

If you are willing to carve your own path as an entrepreneur the possibilities are endless. Most new jobs in the United States are created by small business owners who had a dream and opened their own business. Someone once said that Las Vegas was the last bastion of entrepreneurship. Well, we are only an hour away.