The Right Take: Trump offered amnesty for 1.8 million
By Victor Joecks Special to the Pahrump Valley Times
February 2, 2018 - 7:00 am 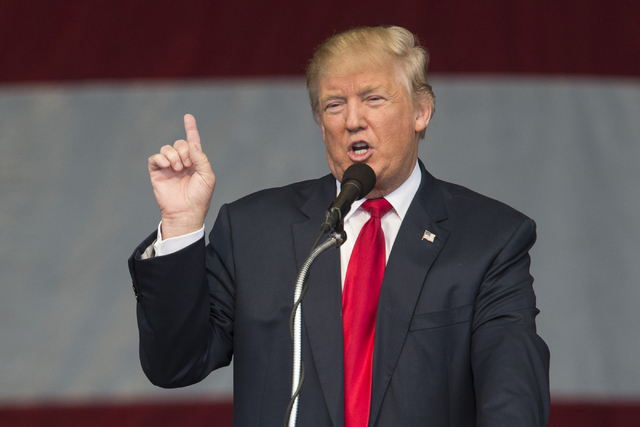 Erik Verduzco/Las Vegas Review-Journal Donald Trump “wants to use #Dreamers as bargaining chips to advance his anti-immigrant and xenophobic policies that will harm our country for generations to come,” tweeted Sen. Catherine Cortez Masto.

This is a case study for why there’s so little bipartisanship in Washington, D.C. Democrats would rather demagogue an issue than get something they claim to want.

Donald Trump “wants to use #Dreamers as bargaining chips to advance his anti-immigrant and xenophobic policies that will harm our country for generations to come,” tweeted Sen. Catherine Cortez Masto.

Contrast that rhetoric with what’s actually in the plan. For years, Democrats have sought permanent protections for illegal aliens who came to the United States as children. Trump’s plan would give it to them.

In all, 690,000 illegal aliens signed up for Obama’s unconstitutional Deferred Action for Childhood Arrivals. Trump’s plan would give them legal status and a path to citizenship.

There’s more Democrats should love. Trump offered the same path to citizenship to another 1.1 million illegal aliens who came as children but weren’t part of DACA. That is a massive amnesty — especially for someone who won the GOP presidential nomination largely by pounding his opponents for being weak on immigration.

In exchange, he wants $25 billion for a border wall and border enforcement. He wants to limit chain migration to the nuclear family and eliminate the Diversity Visa Lottery program.

Although good proposals, these enforcement measures are much less stringent than they appear. First, there is no requirement for mandatory E-Verify, which would be the most effective tool to limit illegal immigration. Second, it would take years to build a wall, and a future Congress could — and would if controlled by Democrats — stop construction. Third, chain migration would end only after clearing the current “backlog.” That backlog consists of 4 million people.

If Democrats were serious about helping DACA recipients, they’d be high-fiving all the way to the negotiating table. Instead, they went straight to name-calling.

“We should call President Trump’s latest immigration framework what it is: A laughable attempt to disguise hardline, anti-immigrant policies as bipartisan reform,” said Rep. Ruben Kihuen in a statement. “Unfortunately, this is not a serious proposal to reform our immigration system, and we shouldn’t waste time considering it.”

This deal is even more generous when you consider that Democrats are in the minority. Their only leverage is stopping a deal in the Senate, because it takes 60 votes to break a filibuster. Our form of government requires compromise, but Democrats have shown no interest in that.

What’s happening makes sense once you realize it’s a cynical political maneuver. Democrats think they can use the lack of a DACA deal to drive turnout and paint Republicans as racists for demanding border security.

Democrats weren’t always like this. Imagine how many meltdowns you’d see on MSNBC if Trump sounded anything like Bill Clinton did during his 1995 State of the Union address.

“All Americans … are rightly disturbed by the large numbers of illegal aliens entering our country,” said Clinton. “The jobs they hold might otherwise be held by citizens or legal immigrants. The public services they use impose burdens on our taxpayers. That’s why our administration has moved aggressively to secure our borders more by hiring a record number of new border guards, by deporting twice as many criminal aliens as ever before, by cracking down on illegal hiring, by barring welfare benefits to illegal aliens.”

Trump presented a plan that only Republicans like Jeb Bush could love. Democrats said it was “anti-immigrant” anyway. That’s because Democrats don’t want a deal on DACA.

They want it their way or not at all.