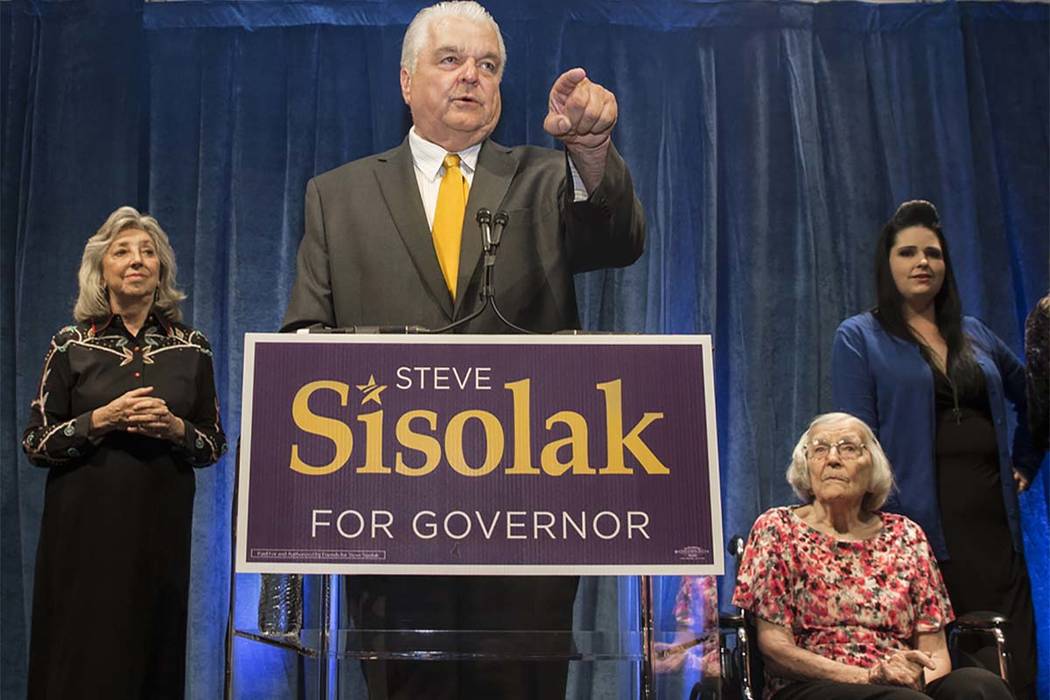 Steve Sisolak speaks to supporters at a watch party after winning the gubernatorial Democratic primary at the Aria on Tuesday, June 12, 2018, in Las Vegas. Benjamin Hager Las Vegas Review-Journal @benjaminhphoto

Steve Sisolak won the Democrat nomination because of his appeal to older voters. Sen. Dean Heller’s formidable campaign team will help him in a hotly contested Senate race, and Susie Lee is favored over Danny Tarkanian in Nevada’s 3rd Congressional District.

That’s all according to Zac Moyle, a long-time Nevada political consultant.

“I think most people weren’t surprised that he (Sisolak) won. It was the margin,” said Moyle while filming Nevada Politics Today. “He had to win with women to win like he did last night.”

An increased turnout among women “did not benefit Chris G. like conventional wisdom would suggest.” Moyle believes that older voters, who made up most of the electorate, boosted Sisolak to victory.

“Steve Sisolak is the perfect candidate for older senior voters,” said Moyle. “He’s a moderate. He doesn’t really rock the boat. He’s back and forth on issues.

“He’s a safe candidate, which is why it’s staggering that he’d run so far left and spend so much of his war chest in that primary election. To do that, he’s really running against some of the things that make him so effective in the general election.”

While Moyle thinks Sisolak can flip-flop back to the middle, the campaign of Republican challenger Adam Laxalt could use Sisolak’s own words against him. Sisolak has “taken some of his best attributes and really pushed that out of the way.”

The Nevada U.S. Senate race features Sen. Dean Heller trying to hold off a challenge from freshman Rep. Jacky Rosen. Moyle said Heller’s past experience running for office, larger war chest and campaign team give him an advantage, while Rosen’s smaller record will help her.

“Demographically speaking, the race would probably favor Rosen. But really it’s up (to) the Heller campaign as far as how they define her and move her based on the limited record she’s shown so far,” said Moyle.

“That race, more than any other one, will probably be defined by Trump,” said Moyle.

“I think based on recent history, you give Susie Lee the advantage just for being the Democrat in the race. I will say that, for Tarkanian, this is one of the best opportunities he’s had in a long time.”

Moyle thinks Steven Horsford is the heavy favorite in Nevada’s 4th Congressional District. He said Republican candidates in that race have been hurt by Libertarian and Independent American Party candidates siphoning off GOP votes.