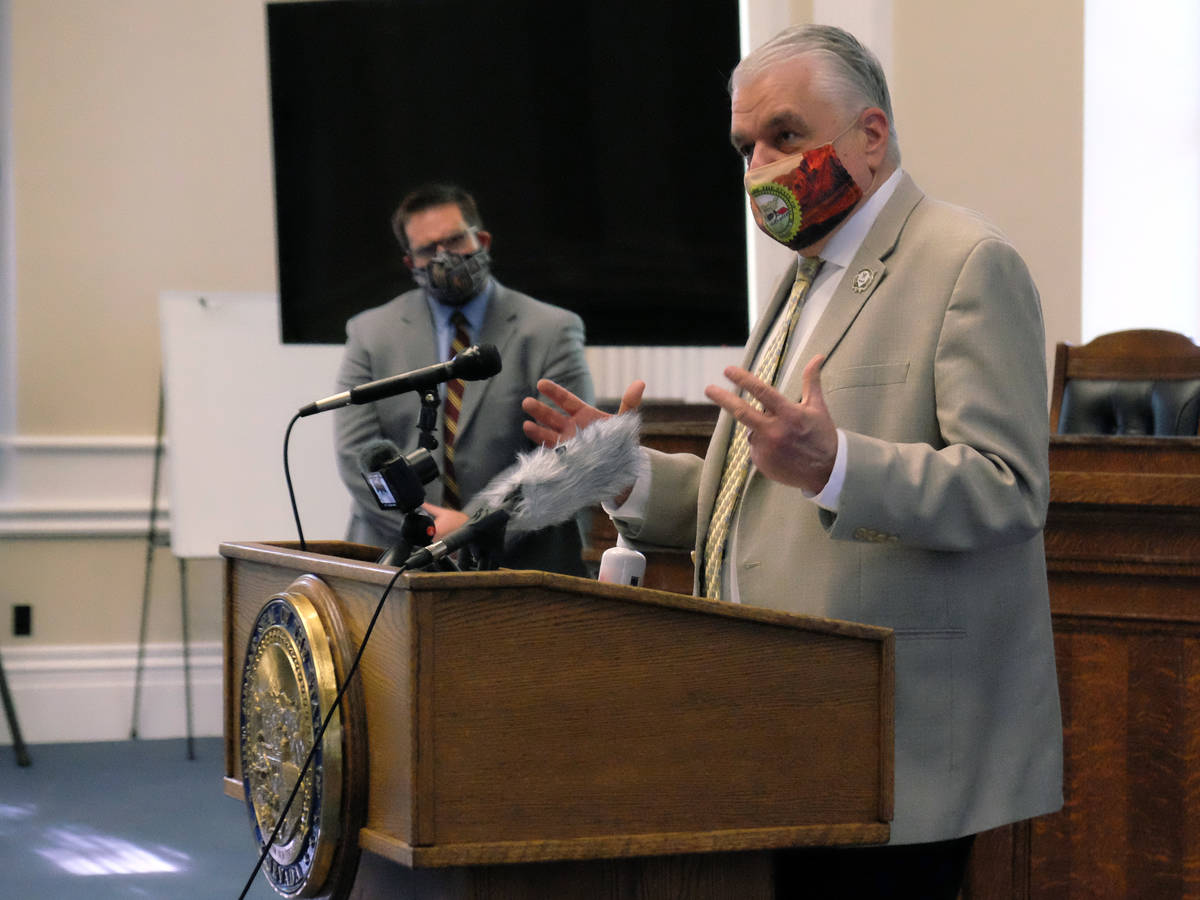 Gov. Steve Sisolak at a press briefing at the Capitol Monday on the state's new COVID-19 mitigation and assessment strategy. Behind him is Caleb Cage, the state's COVID-19 response director. Aug. 3, 2020. (Bill Dentzer/Las Vegas Review-Journal)

Gov. Steve Sisolak has bestowed kingly powers upon himself because he thinks the coronavirus requires acting like your parent.

At his Monday press conference, Sisolak revealed the fundamental mistake he continues to make. “I promise you, I will give you all I have: my energy, resources, my focus and my best efforts, to continue to walk this tightrope between your personal health and your financial sustainability,” he said.

In a free country — remember those days? — you have the liberty to balance those priorities yourself. The flip side is that you must live with the consequences of your decisions instead of expecting government to bail you out.

A one-size-fits-all response to coronavirus doesn’t make sense. The virus’s lethality varies dramatically by age and underlying health conditions. If you are older than 75, you should be taking extraordinary precautions — whether Sisolak mandates them or not. If you’re under 35, your chances of dying are vanishingly small.

For instance, 27,800 people older than 75 died in the United States during the week ending on July 18. Of that group, 2,700 were coronavirus deaths. That same week, 76 people under 35 died of the virus. That’s compared with 2,000 total deaths for the same age group.

It doesn’t matter how hard Sisolak is trying or how much information he has. He’s making decisions that he has no business making. He’s acting like the parent of a 3-year-old, instead of the governor of 3 million people.

As a parent, you have to balance competing priorities. Babies would die without someone feeding and nurturing them. Toddlers would die crossing the road without an adult. Without prompting, most elementary school students wouldn’t brush their teeth, do their homework or eat vegetables. Teenagers need limits on social media and driving a car.

But one of the simultaneous joys and terrors of being a parent is letting go of control as kids grow older. By the time they graduate high school, adulthood is staring them in the face, ready or not. That includes making their own decisions and determining how they balance their priorities. News flash to Sisolak: Nevada’s adults don’t need you to babysit them.

Sisolak also has amassed powers for himself that would make a petty tyrant blush. He has severely limited church services, while reopening casinos. He’s controlling youth sports. He has ordered people to wear masks in public.

It’s often a good idea to wear a mask, but there’s a difference between making a prudent decision and having it shoved down your throat. Also, the mandate leads to absurdities such as requiring people to wear masks inside a store even if they’re more than 6 feet away from others.

Making it worse is that Sisolak seems like he’s making it up as he goes along. Take his incomprehensible Monday news conference. The governor vaguely threatened counties and businesses that don’t abide by his ever-changing dictates. His explanation of his new plan sounded like a mad lib filled in with corporate buzzwords. Nevada’s having budget problems, but surely the governor can afford to hire a decent copy editor.

It does seem as if Sisolak feels genuinely burdened by the responsibility of making decisions for 3 million Nevadans. But that’s the problem. Quit trying to be Nevada’s parent-in-chief who wields kingly powers and get back to serving as governor.