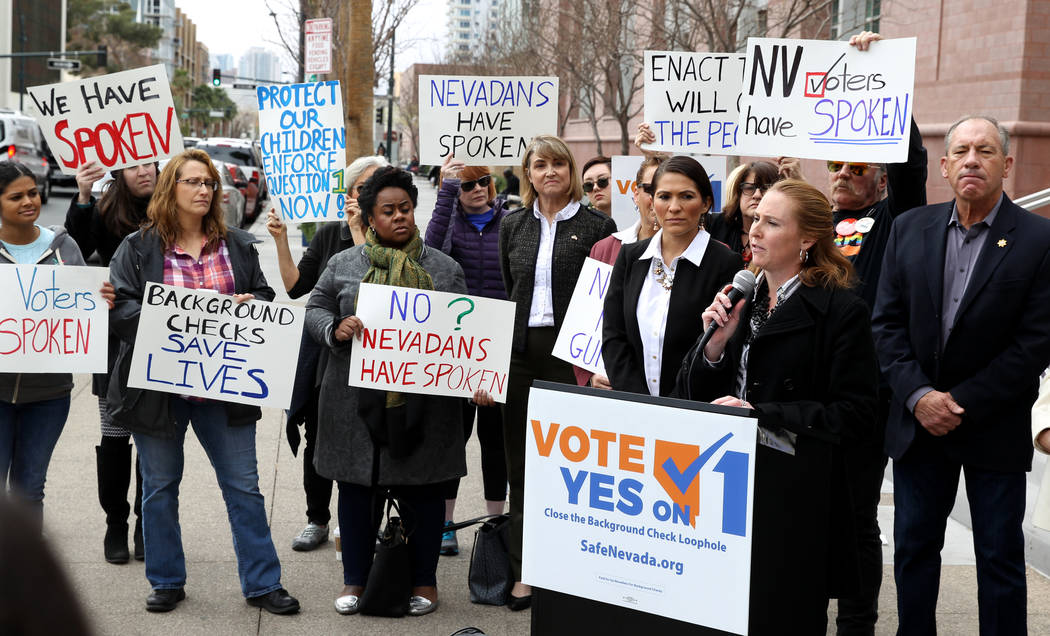 K.M. Cannon/Las Vegas Review-Journal Elizabeth Becker of Nevada MOMs Demand Action speaks with supporters of Question 1 outside the Regional Justice Center in Las Vegas on Friday, Feb. 23, 2018. She called on Gov. Brian Sandoval and Attorney General Adam Laxalt to enact the voter-approved initiative for background checks on all gun sales. 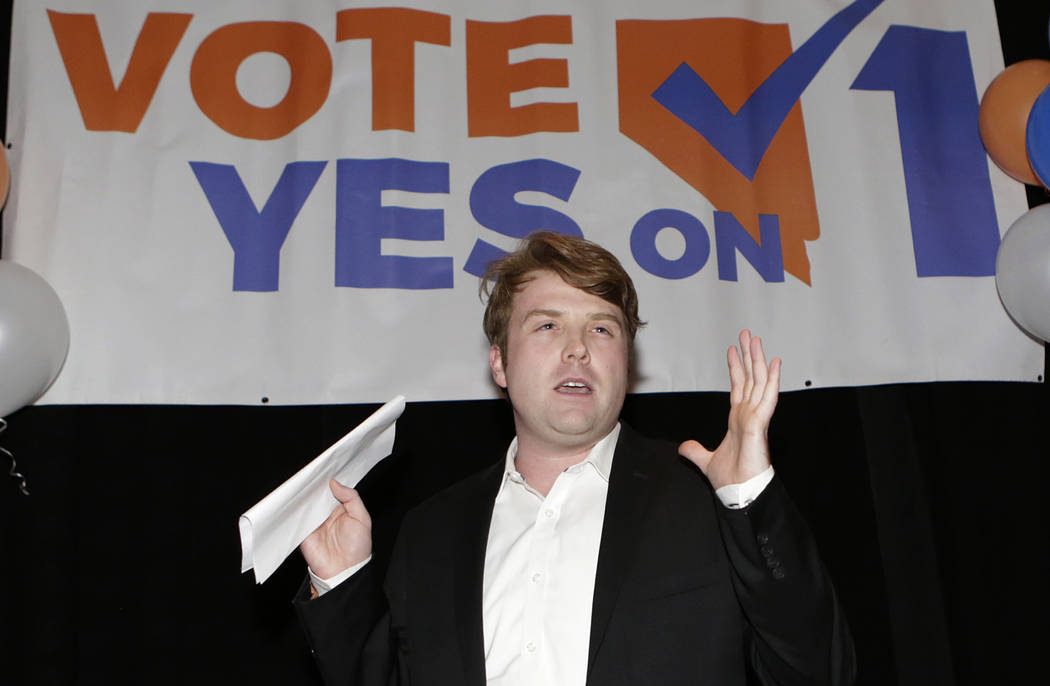 Bizuayehu Tesfaye/Las Vegas Review-Journal Joe Duffy, Yes on 1 campaign manager, speaks to the pro-background checks before a gun sale or transfer groups during a watch party at Cucina Restaurant Tuesday, Nov. 8, 2016 in the Crystals in Las Vegas.

“In Nevada, there was Background Check Initiative that voted (sic) for in November of 2016 and the NV Attorney General @AdamLaxalt won’t enforce it, but he’ll happily take NRA money,” tweeted David Hogg recently. Hogg attended Stoneman Douglas High School and has spearheaded calls for gun control. “We know who your (sic) working for Adam, we see you.”

Don’t focus on Hogg’s spelling and grammatical mistakes. It’s fudging the facts that should be unacceptable.

In Nevada, there was Background Check Initiative that voted for in November of 2016 and the NV Attorney General @AdamLaxalt won’t enforce it, but he’ll happily take NRA money. We know who your working for Adam, we see you. #USAoverNRA

Nevada voters did narrowly approve a ballot initiative in 2016 that required an FBI background check on private-party gun transfers. But once the initiative passed, the state Department of Public Safety asked the FBI to do the checks. One small problem. The FBI, while still under the control of Barack Obama, said no.

Two decades ago, Nevada agreed to run its own background check system. It is actually more thorough. Along with hitting the federal database, Nevada looks at state-specific files covering domestic violence and mental illness. But the initiative mandated federal checks because the state checks cost money, and supporters of the proposal felt that might be a disincentive for some voters. They wanted to avoid a fiscal note to increase the initiative’s odds of passage.

Instead of acknowledging their $20 million mistake, background check supporters have been playing the blame game. They haven’t identified a flaw in the legal reasoning of Laxalt’s office. So they’ve resorted to essentially asserting that Gov. Brian Sandoval needs to ask the FBI again, but this time say “pretty please with a cherry on top.” After background check supporters filed a lawsuit last October, Sandoval’s office asked a second time. The FBI said no — again.

That should be the end of this canard, but Hogg hasn’t been one to let facts get in the way of his preferred narrative. Neither has Democrat gubernatorial candidate Steve Sisolak, who responded with, “Couldn’t agree more. Unlike my opponent, I’ll stand up to the @NRA.”

Now this is funny. Sisolak received an A-minus grade from the NRA in 2012. If he didn’t have a liberal primary challenger, Sisolak would be standing up to the NRA and thanking the group’s officials for their support.

Sisolak isn’t the only Democrat trying to pull a fast one on Nevada voters. Aaron Ford, a Democrat attorney general candidate and Senate majority leader, is also trying to deceive the public.

“Adam Laxalt is full of excuses about why he won’t work to implement the will of the people and find a path forward,” Ford said last month at a gun control rally. Ford pledged to work with “anyone” in order to “implement” that initiative. Tellingly, he didn’t offer any specifics on how he would do that.

That’s because the only short-term solution is getting rid of the more comprehensive state-run checks in favor of federal checks for all sales. Nevada’s constitution prohibits changing initiatives for three years.

Blaming Laxalt for the sloppy writing of Question 1 has become the Nevada Democrat version of candidate-Donald Trump’s promise that he’d build a big, beautiful wall and “Mexico is going to pay for it.” There’s no logical case for either scenario, but it’s a cheap way to virtue signal on an issue your base cares about. As Trump is finding out, that strategy rarely produces the desired policy outcome.

Before Sisolak, Ford or other Nevada Democrats blame Laxalt for the stalled Question 1 initiative, they should share what they would do to implement the law. That the only way to do so involves weakening Nevada’s current background check system tells you everything you need to know.