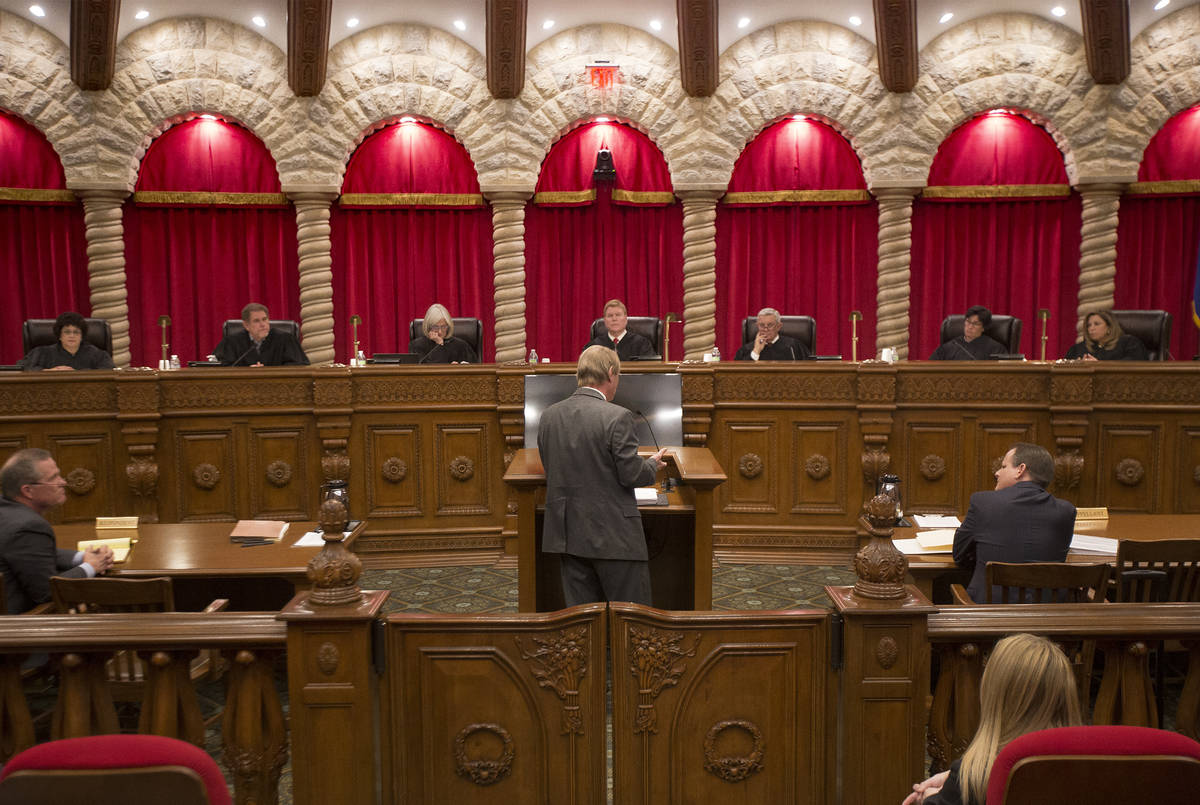 Rachel Aston/Las Vegas Review-Journal The Nevada Supreme Court Justice during the first arguments for the new 2019 court in Las Vegas, in this Jan. 8, 2019, file photo.

The justices of the Nevada Supreme Court want the Legislature to give judges a $30,000 raise. No thanks.

In Nevada, different government agencies are able to write bills directly for consideration by lawmakers. The executive and judicial branches are able to submit some bills as well. In a state where all authority flows directly from Carson City, there’s merit to this system.

Sometimes, however, government entities propose bills that reek of self-interest, not the public interest. That’s what the Nevada Supreme Court did with Senate Bill 3, which was filed on the court’s behalf.

That’s not all. The measure would enshrine future pay increases into statute. Judges would receive the same percentage increase as state classified employees. Because of a constitutional prohibition on increasing a judge’s pay mid-term, all salary increases would go into effect only after current justices and judges won re-election. Judges generally serve six-year terms.

But wait. There’s more. The bill seeks to roll back a 2015 law requiring new judges to make half of their required pension contributions. Judges have their own retirement system, the Judicial Retirement Plan. The current state contribution rate for judges is 22 percent.

Think about what this means. If judges joined the retirement system before June 30, 2015, the state pays for their entire pension contribution. For a Supreme Court justice currently making $170,000 annually, that costs taxpayers more than $37,000 a year. That’s virtually unheard of in the private sector — and in Nevada’s public sector.

Compared to the private sector, even a retirement contribution of 11 percent is extraordinarily generous. But the Nevada Supreme Court wants taxpayers to foot the entire bill. For district judges in the new system, who would be making $190,000, having the state pay their entire pension contribution would amount to a $20,900 increase in take-home pay.

If you combine these provisions, this bill would increase take-home pay of some judges by more than $50,000.

The one cost-saving measure in the bill is the elimination of longevity pay. Longevity pay is a generous and outdated add-on. It provides a 2 percent boost in pay for each year of service after four years. The total amount cannot exceed 22 percent of a judge’s annual base pay. For a district judge, the maximum amount of longevity pay is $35,200 annually.

That is more than $30,000 — but here’s the catch. Longevity pay would be eliminated only for judges taking office after this bill passes. Current judges would receive the $30,000 pay hike and longevity pay if they win re-election. Spending money today to save a similar amount of money in 10 years isn’t wise financial stewardship.

All of these pay hikes would translate into nice pension boosts, too. Supreme Court justices who are 60 and have 22 years of service are eligible to receive a pension worth 75 percent of their last year’s salary. A $30,000 pay hike translates into a $22,500 yearly pension increase.

No one wants Nevada’s judges to be in the poorhouse. But this proposal is a little much.