The Right Take: Scotus Decision Based On First Amendment
By Victor Joecks Special to the Pahrump Valley Times
July 13, 2018 - 7:00 am 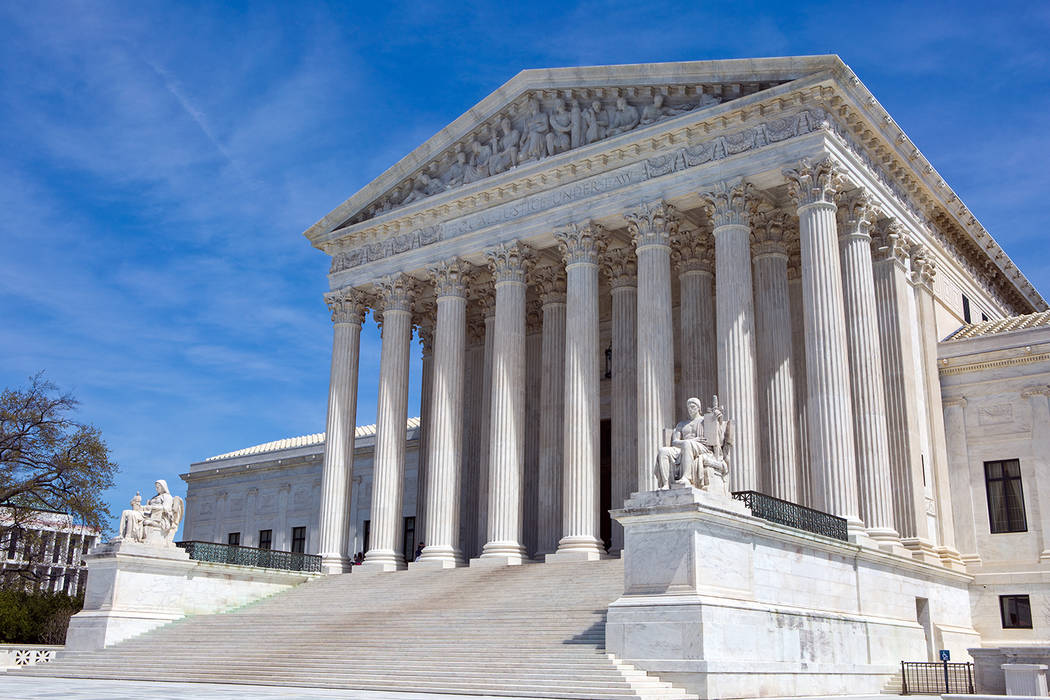 Two of the Supreme Court’s most high-profile decisions recently involved unions and abortion, but the principle at stake was free speech.

By a 5-4 majority, the court got those cases right. But the four liberal justices — and many Nevada and national Democrats — would sacrifice the First Amendment for their preferred policy outcomes.

Start with the Janus decision. Mark Janus works for the state of Illinois, which isn’t a right-to-work state. That means Janus, in order to have a government job, had to pay the union a fee to negotiate his contract.

But Janus didn’t want the union representing him in collective bargaining, and he didn’t agree with the politicians it supported. Imagine having to give $1,000 a year to National Right to Life in order to keep your government job. There would be justifiable outrage from the left even if the pro-life organization claimed it used the money only for nonpolitical activities.

“Under Illinois law, public employees are forced to subsidize a union, even if they choose not to join and strongly object to the positions the union takes in collective bargaining and related activities,” wrote Justice Samuel Alito in the opinion. “We conclude that this arrangement violates the free speech rights of nonmembers by compelling them to subsidize private speech on matters of substantial public concern.”

Worker choice terrifies unions, because they know many employees want to leave, which would cost unions tens of millions of dollars. That practical consequence was, in part, why the court’s four liberal justices dissented.

This “decision will have large-scale consequences,” wrote Justice Elena Kagan in dissent. “Public employee unions will lose a secure source of financial support.” Then came the apocalyptic language. Kagan said the majority has “weaponiz[ed] the First Amendment” and “turn[ed] the First Amendment into a sword.”

Despite the rhetoric, government employees are still free to join a union. Thanks to the Supreme Court, they’re finally free to leave.

Separately, the Supreme Court ruled that government can’t force crisis pregnancy centers, which oppose abortion, to advertise for the procedure. Again, look past the particulars and examine the principle.

Does the Constitution permit a state to require that signs at a gay pride parade include the statement that “marriage is between a man and woman”? Of course not. The First Amendment protects individuals from being forced to share a political message they disagree with.

In his concurrence, retiring Justice Anthony Kennedy blasted the California Legislature for congratulating itself in the bill for passing a “forward thinking” law.

“It is forward thinking to begin by reading the First Amendment as ratified in 1791; to understand the history of authoritarian government as the Founders then knew it; to confirm that history since then shows how relentless authoritarian regimes are in their attempts to stifle free speech; and to carry those lessons onward as we seek to preserve and teach the necessity of freedom of speech for the generations to come,” wrote Kennedy.

It’s not just liberals on the Supreme Court who are abandoning free speech. For decades, the American Civil Liberties Union vigorously defended free speech by anyone — including vile organizations such as the KKK. No longer. A former board member leaked a memo recently. The ACLU will now consider “the potential effect on marginalized communities” in deciding which First Amendment cases to take.

Translated: The ACLU will defend free speech if it agrees with what you’re saying.

That’s depressing. The principle of free speech shouldn’t be partisan. The country needs individuals and groups on the left side of the aisle that are willing to defend speech they disagree with. Unfortunately, they’re in short supply.