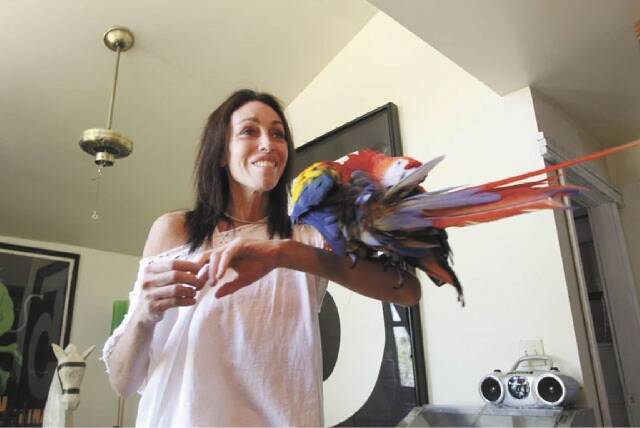 Heidi Fleiss shown with one of her exotic birds. The former "Hollywood Madam" who has called Pahrump home for the past 15 years, announced she'll be relocating to the Ozarks following the shooting of one of her prized parrots.

The so-called former “Hollywood Madam” who’s made Pahrump her home for the past 15 years, announced Wednesday that she’ll be relocating to the Ozarks region of Missouri as soon as February, following the Christmas Eve shooting of one of her exotic birds.

The shooting came just days after a neighbor’s pet bobcat allegedly strayed and killed several of her other prized pets at her bird rescue sanctuary off North Highway 160.

As a frustrated Fleiss put it: “You know, there’s so many people here with no respect for anything.”

Right now, there are still more questions than answers about the bird’s shooting. Fleiss is offering a reward of up to $5,000 for anyone who has info about how her 5-year-old macaw Chuey ended up with a pellet inside its tiny bird body.

Chuey is expected to recover.

The greater loss will be Fleiss, who told the Pahrump Valley Times that she must move for the sake and safety of her birds.

“I hate to go, but it’s not fair to the birds to put them through this,” Fleiss said.

Her decision to relocate is both unfortunate but understandable. We wish her well as she embarks on this new chapter.

Fleiss is a larger-than-life personality who left her mark on Pahrump, long after the notoriety she gained for her illicit dealings in Hollywood in the 1990s. Fleiss ran an upscale prostitution ring based in Los Angeles, California, and is often referred to as the “Hollywood Madam.”

Most famously, she was revered throughout her legal battles for never giving up the names of the A-lister clients who allegedly appeared in her “little black book.”

While Fleiss moved on from her complicated past to become a columnist, television personality and entreprenuer, her local legacy may just be one of reinvention and inspiration.

And it’s quite fitting that she chose our “live-and-let-live” desert town to reinvent herself.

(Where else can you find a place in America that’s willing to shrug off your past dealings as a sex worker?)

In many ways, Fleiss is no different than the thousands who continue to flock to Pahrump for better opportunities and a new start. This is place where newcomers can find success, as we collectively cast aside past judgment, so we can focus on the future and pursue our personal freedoms.

And Fleiss was often aggressive in her pursuits.

In 2005, Fleiss announced plans to open a legal brothel in Pahrump, but pivoted in 2007 to open a laundromat called “Dirty Laundry.” In 2009, she abandoned her plans to open the brothel citing all of the “nonsense in the sex business,” and instead turned her attention to renewable energy, which she described as “perfect for Nevada” and “the wave of the future.”

Fleiss later opened a fashion boutique in Los Angeles. And for the past several years, she’s owned and managed the Flying S Ranch Ultralight Flightpark, an ultralight private-use airport in Pahrump.

Of course, many simply know Fleiss as mama to the dozens of birds she keeps at her residence here.

Fleiss is the spirit of Pahrump: a complex individual who’s outspoken, unwavering and enterprising.

Madam, you will be missed.