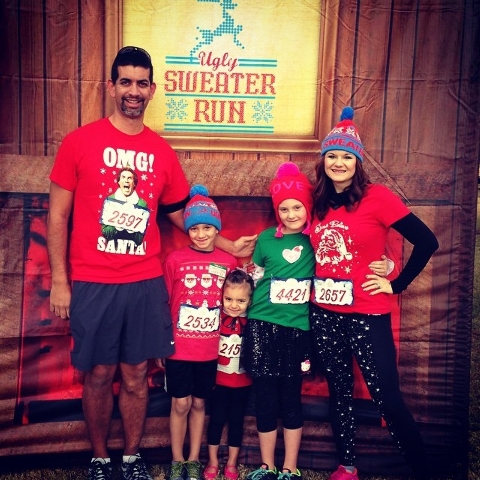 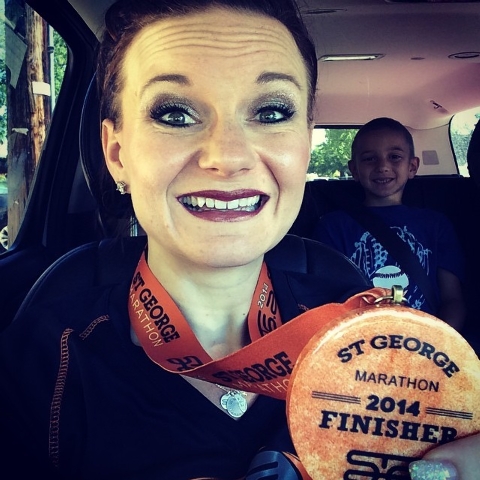 Desiree Veloz started running four years ago. For her, running was a challenge. Veloz is a teacher on assignment for the School District. She needed a physical activity that would keep her from falling back into the world of anorexia. Running has done just that and more. In October she ran her first marathon.

Veloz said when she got married she and her husband, Armando, really didn’t do anything to keep in shape. Armando is an eighth grade math teacher at Rosemary Clarke Middle School.

“Weight has always been an issue for me,” she said. “When I am running I always feel that I am becoming stronger. At the end of 2013, I set a crazy goal to run this marathon. I ran a half marathon last year in November and that is when I knew I could do the full.”

Her running has become the way to control her weight in a healthy manner. When Desiree was in high school she was anorexic. She learned this fear of gaining weight from her mother. So over the years since, she has been trying to teach herself weight control that is healthy. Over the last three years it has also become a way for her family to bond.

“I tried different things at the gym,” Desiree said. “My weight loss journey is a crazy one. I went from anorexic to overweight. I didn’t want my daughters to go through the same thing. Running is a challenge because your brain is saying you can’t do it but you can. When I started running I had to think about my eating because it is all about having your body fueled correctly.”

Desiree got into running slowly at first. She started off with a 5K first and that is 3.1 miles.

For Desiree it was a slow process, but by 2013 after she had run a half marathon, she knew she was ready. She trained hard for her marathon. She would run up to 30 miles a week. For her, the training was important.

“I never missed a training,” Desiree said. “She said she had to balance training with family time. When we have kid events I would go and watch them and then as soon as my husband could relieve me, I would then run home and that meant getting home as late as 8 p.m.”

Desiree said she ran the marathon in her head before even stepping foot on the pavement. During the training time she learned how to hydrate her body and also how to fuel it. Fueling can be a problem because the race is over four hours long.

“My body likes Clif bars,” she said. “It is like a protein bar. I also drink water and Gatorade.”

Desiree got the whole family into her training. Armando would throw the kids in the car and then take the whole family up to the mountain pass on Highway 160. They would then wave goodbye to mommy and meet her in Las Vegas.

“That was my hardest training because it was so cool in the mountain and when you come down it just gets hotter and hotter,” she said. “The heat hits you. My husband would push me by giving my Gatorade to me and telling me to keep going.”

She does other things to keep her weight in shape. She became a certified personal trainer just so she can lose weight the proper way.

“Again, this was just for me to figure out the health side,” she emphasized.” I am also a Beach Body Coach which is a program of nutrition and exercise.”

Desiree said she couldn’t do all the fitness alone. Her husband plays a key role. Armando runs too.

“We run together as husband and wife,” she said. “And then sometimes we do events together and separately.”

He didn’t run the marathon with her, but he likes to run the shorter distances, 5Ks and 10Ks.

“I would like to do a marathon in the future, but right now the training takes too much time and we have to raise three kids. Maybe when they get older and they can watch themselves,” Armando said.

For now, someone has to watch the kids and cheer.

“It was basically on my own,” Desiree said. “My husband is really supportive so he goes along with my crazy ideas.”

The husband and wife team likes to run relay races together. They recently ran a Ragnar Relay and the RTO, which is the Reno-Tahoe Odyssey Run. This race starts in Reno and runs through Carson, Tahoe and then back to Reno. It is 178 miles with a 12-man team.

“Armando likes the Ragnar and has signed up for another. I have not,” Desiree said. “A Ragnar is a race where they stick you into a van with six people you may not know. You are all sweaty and smelly and tired. It’s not too pretty. It was a blast though and I was lucky to know the people in the van. The RTO was better.”

The smaller runs have all been part of the learning curve for Desiree and they all helped to accomplish her goal of running her first marathon.

On the day of the marathon she was nervous, but her training and mind took over.

“I am an all or nothing person just in general,” Desiree said. “I was nervous showing up at the line because it was do or die. I knew I had to do it then. Once I started going I was carried by the energy around me. Most runners are really great people and you are like a team when you are out there. Even though I didn’t know anyone, they were supporting me.”

All the training led to smooth sailing during the actual running of the 26 miles.

“I felt amazing midway through and when I got to the finish line I told my family I could have pushed myself harder,” she said.

Normally she runs with technology and this tells her how fast she is going and how far, but during the marathon she didn’t want the stress of this.

“I didn’t want to be bound to a time and feel horrible at the end,” Desiree said. “So I didn’t have anyone in my head telling me how fast I was going. So, I just ran and however my body felt that is how I ran. I really wanted to come in at four hours. I was not thrilled with the time, but also how can you be upset, you just ran 26 miles. So, I felt really great. There was never a point I wanted to quit.”

She said she also was glad her family was watching her and was there for her.

“My first half-marathon, I didn’t bring my family and it made myself sad because I wanted to share that moment with them,” she said. “So, it was important to have my family there at the marathon. Armando’s parents came too. They met me every seven miles and were at the end. The spirit really carries you.”

The family now runs at least one event together and Armando said it has become a family tradition.

“We are modeling staying in shape to our kids,” he said. “A lot of our workouts are by DVD and the kids would join in. The Ugly Sweater Run we incorporated it into my daughter’s birthday party last year and we had some of her friends run. It was fun and exciting and it came up again this year and we decided to make it a family tradition.”

Desiree added, “We ran the Ugly Sweater run in Las Vegas as a family. Aydon came in at 29:34 at 7 years old. This was a 5K. I ran with him and I had to pace him and tell him to slow down. My daughter ran too and she is 9 years old and my husband ran with her and the stroller.”