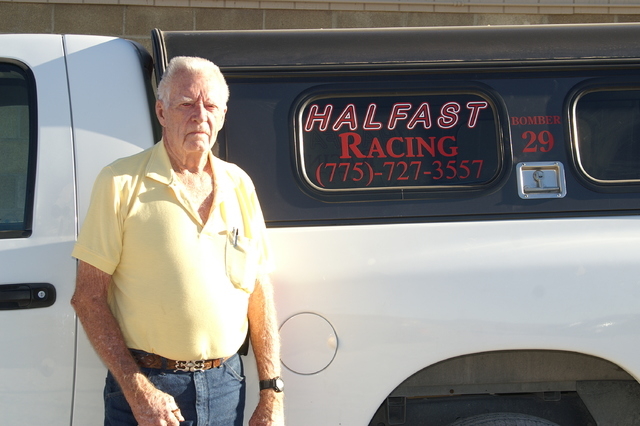 Many senior citizens in Pahrump are chastised for their slow driving in the valley. Russ Wilson is 86 and definitely not one of those drivers. Wilson races at the Pahrump Valley Speedway and is the oldest driver on the track at 86 years old.

Years ago he thought he gave racing up for good but that all changed this season.

Wilson came out to Pahrump in 1996 and paid no attention to the track until a couple of years ago, when he had a gathering of friends at the house and he started talking about the old days. One thing led to another and the next thing they knew they were at the Pahrump Valley Speedway.

“I had stopped going to the racetrack because I knew what would happen if I went to the racetrack. Anyways, I went and the next thing I know, I was looking for a chassis,” Wilson said.

All that time in Pahrump, he really didn’t know if he still had the reflexes necessary to race.

“I knew that I was in reasonable health. I am a student of tai chi and I am the oldest student that the sensei has,” he said.

Jose Hernandez is Wilson’s tai chi instructor at Dragon Cloud Dojo and has been for the past 3-4 years.

“What can I say? He is 86 years old and I hope that I can be like him some day. He tells me I keep him alive,” Hernandez said.

Wilson put a car back on the track in February of this year just two days before his 86th birthday.

The racer has been racing since he was 17. He is from the generation that fought in World War II and was in the army air corps, which was the predecessor of today’s air force. When he jumped into a race car for the first time he was still in the army and was a radio mechanic.

“I was working in a pit crew for a driver named Tommy,” he said. “I was working in his garage when I saw he had this rail car. He told me I could sit in it and then he asked me if I wanted to drive it for him. I ended up driving for a season and a half. I didn’t go on the circuit because of my military commitment. At that time, I even raced against Al Unser, who is the most successful Indianapolis 500 racer, when he was racing Midgets.”

While in the military he raced in Roswell, New Mexico. Wilson is a dirt racer. He started racing on a dirt tracks that were the same distance as Pahrump’s track (a quarter mile).

“Most of my racing career has been on dirt,” Wilson said. “I prefer it. I did race on asphalt, and that was with a racing sports car. That was on a road course. I consider myself a ‘go straight, turn left driver.’ Drag racing and going straight as fast as you can does not hold interest for me.”

When his father passed in Southern California he returned home to take care of his mother. That is where he was born and raised. Racing was natural for him because he was a third generation mechanic.

“I got out of high school and took flying lessons and then decided I wasn’t interested in watching the world go by from a plane. I ended up back in California. I made a jalopy out of my Ford sedan,” he said.

He got back into racing dirt track in Carpinteria, California and was living in Santa Paula at the time. He recalls racing his jalopy and the fastest it ever went. This was in the late 40’s and early 50’s.

“I remember in the middle of the first heat there was a loud bang and I was instantly blind,” Wilson said. “I reached up and jerked my goggles down and then I could see. It was oil. I had blown a hole in the piston as big as a silver dollar. That had ignited fumes in the crank case.”

Wilson said his best years were in the middle 50s.

“I was driving a Hudson-powered track roadster in Culver City. It was a V-8 Ford. There is a feeling when you throw a car into a turn at or above 100 miles an hour,” he said.

Of course it’s not only the physical racing that Wilson missed. He also missed just talking to the drivers and the camaraderie.

He likes the joking around and just talking about cars with a bunch of guys. At the Pahrump Speedway he races in the bomber class. He recalled during this season a bunch of the Bomber drivers were sitting around.

He said two of the best drivers, JJ Nunn and Gary Wyatt were sitting around talking and JJ was upset because some cashier at a restaurant had offered him a senior discount.

“JJ is in his mid-fifties,” Wilson said. “I am listening to this and said, ‘Ah you all are a bunch of punk kids.’ And JJ, who was talking didn’t hear it, but Wyatt heard it. He turned to JJ and said, ‘Did you hear what he called you?’ He said, ‘no, what?’ ‘He called you a punk kid.’”

That comment made JJ’s day. He was young again for that brief moment.

These guys then invited him to come to their Online radio show and he knew that comment would come up.

“I reached in my pocket and pulled them out and said, ‘Here are my bonafide, which is the old term for ‘proof of what you are talking about,’” he said. “They read them and looked at the dates which were both before they were born and concluded they were both ‘punk kids.’ I guess I have been racing cars since NASCAR was hauling booze.”

Racing at the speedway has not been a banner year for Wilson. His experience helps, but he blames the car. He says it could be faster but he still has to race the kinks out of it. The best he has ever done was sixth place out of seven drivers.

He describes his style of racing as a no-touch driver.

“I don’t want to stick my tire into someone else because I can’t afford to turn my car over,” Wilson said. “In my opinion the way you spell stupid on the racetrack is ‘anger.’”

Wilson plans on racing until he or the car stops racing. He says racing gives him new life and something to look forward to.