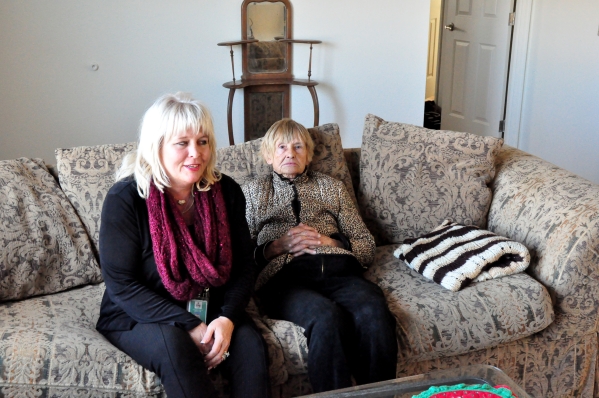 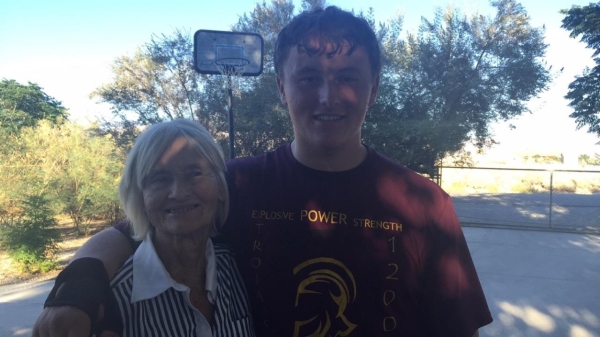 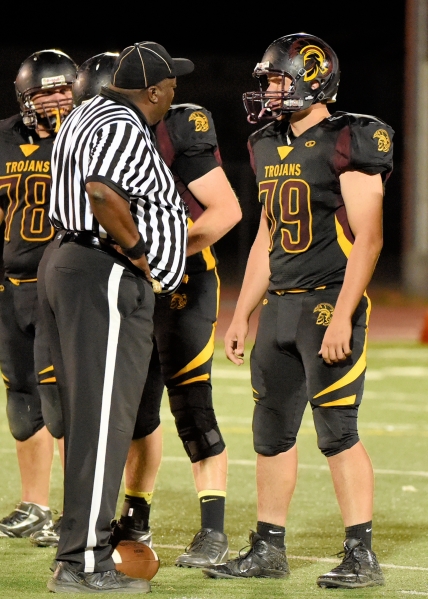 Trojans football player Tyler Baumgarten knows what it takes to win football games — teamwork. But interestingly enough, the toughest lessons on team building has not come from football, but from his own family.

Living with Alzheimer’s is tough and stressful for most families. According to the Alzheimer’s Association, it is the sixth leading cause of death among seniors in America.

Families usually are forced to put their loved ones in a home because the stress becomes too much of a burden.

The Baumgarten family decided not to put grandma in the home and three years ago moved grandma out from Colorado to Pahrump. Grandma is Joan Rockouski, the mother of Joanne Baumgarten.

For Tyler Baumgarten, the eldest of two sons, taking care of his grandmother has become a family duty and obligation, but this has come with a steep price.

Grandma now lives with his family in a modular home they bought for her and placed in their backyard.

Tyler Baumgarten still has strong memories of his grandma before she got the disease.

“Before, she was a well dressed lady and was very meticulous with her clothes,” he said. “I also remember she loved to cook and was a great grandmother.”

But many of those memories are being forced out by recent ones that he would rather forget. He blames the disease for stealing his grandmother.

“I think Alzheimer’s takes away the good memories I had of her,” Tyler Baumgarten said.

He sees his grandma routinely wearing old sweats and she would wear the same clothes for days if she was not forced to change her clothes. She can’t even dress herself and she must be fed now.

The grandson also sees his grandma staying up all night pacing her house, which is known as sundowning.

“She won’t go outside during the night,” he said. “I think she is maybe afraid to go out at night, but I know she stays up because I see her walking around in her house.”

The disease has taken a big toll on grandma and has also changed the family dynamic.

“Grandma and I were close then and now we are not as close because Alzheimer’s has made her forgetful,” he said. “She doesn’t remember me sometimes and thinks I am her son-in-law.”

Baumgarten said his grandma’s disease has also changed his parents.

“I know it has taken a toll on my mother,” he said. “She is stressed out because she spends a lot of time with grandma. She never has any free time anymore. She is pretty much raising another kid.”

This is apparent in the way grandma eats certain foods.

“Instead of using a fork, she picked up a potato with her hands and ate it,” Tyler Baumgarten said.

“My grandma will also run in and out of the house like a kid. In the summer she runs the electric bill up because she leaves the door to her house wide open. My dad can’t watch her because he works nights and sleeps during the day and my mother is working during the day.”

Soon the family realized that they will be forced to hire a full-time nurse to take care of her. Until then the family all takes turns watching her.

The football player said the disease tests your patience.

“It can be stressful at times because after football I come home and I am tired,” he said. “She is very repetitive with things and will ask me over and over the same things. It’s very irritating when you’re tired.”

The grandson added grandma will hide things and then forget where she hid them.

“She then blame others for stealing it from her,” he said. “Also, she will break things and forget that she did it and blame others for breaking the items. If she blames you, you can’t argue with her or she will just keep going on and on.”

This paranoia is another stage of Alzheimer’s.

According to Tyler Baumgarten this behavior is constant, which means the family has to really watch her and this means there is little down time for the family as a whole.

“Our family spends very little time together so when we do we like to blow off steam in a big way and this means four-wheeling at Dumont Dunes,” he said. “We also like to do bonfires in the desert.”

He added that he noticed his parents don’t get away as much as they used too so he tries to lend a hand.

“I try to help my mother as much as I can,” Baumgarten said. ” When I see grandma is annoying family members I would take her back to her house. I will also help by giving her medication and I can also watch her to give my mom a break. The disease has taught me patience and that you have to do what you have to do for loved ones.”

Learning about the disease has been a priority for everyone since Grandma came to live with them. He said this has mostly fallen on his mother’s shoulders.

The nature of the disease has also made him realize that the disease could also be with his mother because it is passed on genetically.

“It’s scary to think I could get it or my mother and dad, but I know if my mother or dad got it that it won’t be much of a shock,” he said. “I would never give up on my parents and put them in a home.

“The disease does pull us apart but it also brings us together.”

He said the stress of the disease has made the family stronger.

“Dad is stressed, mom is stressed but we can and do sit down and talk about it,” Tyler Baumgarten said. “The disease has taught us to communicate better.”

He thinks though that if his family was not close to begin with that it would have torn them apart more.

“This closeness has helped us to get through this,” he said.

“For those currently going through this, or those that may go through this in the future, it is important not to forget that as your love one loses their identity that you don’t forget who they were,” Joanne Baumgarten said.