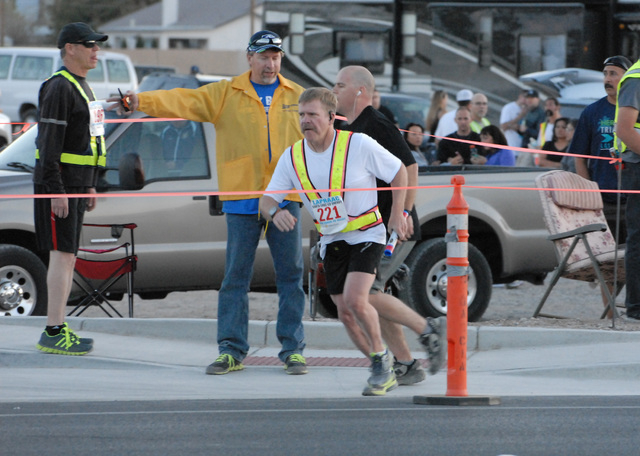 One thing you don’t want to do on Saturday night is to commit a crime in Pahrump. This Saturday from the hours of 5:30 p.m. to 2 a.m. the Baker to Vegas run will be coming through town with nearly 8,000 police officers and support personnel.

The Baker to Vegas run is where police organizations from all over the United States form relay teams to run the 120 miles in 20 stages from Baker, California to Las Vegas.

The relay was started by two Los Angeles police officers, Chuck Foote and Larry Moore 30 years ago. On Saturday 262 law enforcement teams will run the 120-mile course with 20 stages to Las Vegas.

The race is put on each year by the Los Angeles Police Revolver and Athletic Club. The relay teams will line up just outside the town of Baker, California, which is just some 77 miles to the west of Pahrump.

The teams are entirely made up of law enforcement personnel and each team consists of 20. The distance for each team member varies. Some are selected to run 3-4 mile legs while others will run 10-mile legs.

The race comes right through Pahrump via Highway 372 and then the course follows Highway 160 into Las Vegas. Of course from 5 p.m. until the early hours of dawn, one can expect the traffic to move slowly on those two highways, so plan your weekend and travel times.

The Nye County Sheriff’s office will not have a team for the second year in a row. The department does not have enough runners to form a team.

For some Pahrump businesses, this will be the busiest day of the year. This is the case for the Shell gas station at Blagg and Highway 372. This just happens to be one of the staging areas.

The other one is on Highway 160. The staging areas are used by the relay teams to assemble.

“We ordered a lot of Gatorade, water and salted snacks for the run,” he said. “We go through one week of water in an eight-hour period.”

The stores impacted by the run are on the route.

Businesses off the beaten path like Mom’s Diner are not affected too much by the run.

“For us it’s just another day,” Diane Chumley, co-owner of Mom’s said.