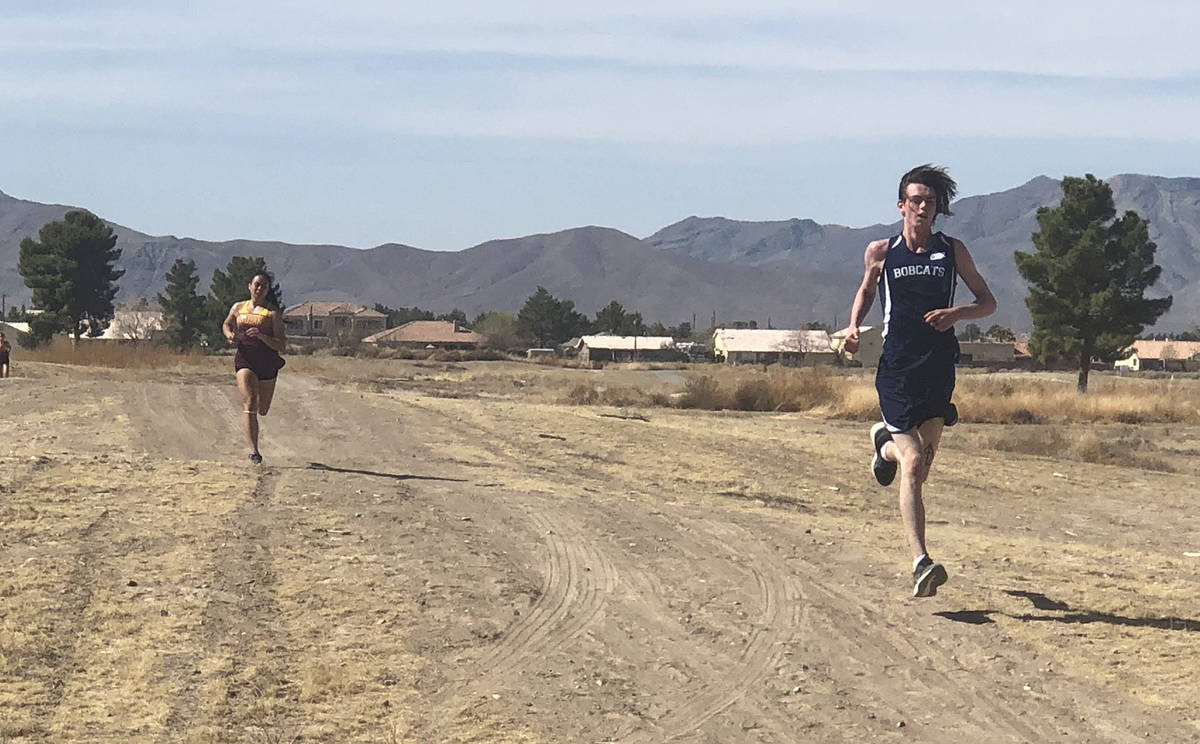 When Pahrump Valley High School junior Makani Araujo told her sister she was going to run cross country, the reaction was unsurprising.

Trojans coach Erik Odegard says his team is always recruiting new members. But not many of the new recruits have as good of a debut as Araujo did at the Trojans’ opening meet of the season.

Araujo covered the 3-mile course on a former golf course near the high school in 24 minutes, 10.0 seconds, placing her second behind White Pine’s Anna Speakman-Watt and first among Pahrump Valley’s girls.

“She ran great,” Odegard said. “She looked a little stiff. She looked nervous to start the race, but I think as the race went on she started to feel better.”

“I feel great,” Araujo said after the race. “I’m kind of surprised that I did this well. I was expecting to be more in the middle. I wasn’t expecting to finish really well.”

Araujo said she started playing volleyball in eighth grade. Her sister, Mahina, is a senior outside hitter for the Trojans.

“It was really fun for a while,” Makani said of volleyball. “I just wanted to try something new. Running around the court was fun for me, and the people.”

But that desire to try something new was strong, and it’s not like she didn’t know there were other options.

“My friend has been trying to get me to do cross country for three years,” Araujo said, mentioning Beverly Roundy and her sister, Patricia.

Now Araujo is on the other side, trying to recruit people to cross country — with little luck.

“I have been trying, but so far no one wants to join,” she said. “I’m used to that. I’ve been trying to get people to do track and volleyball for years, and no one’s ever wanted to do it. This isn’t anything different to me.”

But the people who are already there have made Araujo feel right at home in her new sport.

“I love our cross country team,” she said. “I have so many friends in this group, and it’s just so much fun. Everybody’s so laid back and ready to have a good time.”

Araujo had another good time at her second meet, bettering her opening mark by more than 2 minutes in running Faith Lutheran’s 3-mile course in 22 minutes, 1.40 seconds. That was good for eighth, less than 3 seconds behind teammate Kaydance Hagerstrand.

Like many cross country runners, Araujo is also on the track and field team, just not in the way you would expect.

“I like mostly throwing,” she said. And she was off to a good start last spring, setting a personal record in the shot put and coming within 2 inches of her personal best in the discus in the season’s only meet before the pandemic shut everything down.

“This is better than track, but also I have more friends here,” Araujo said of cross country. “I get to go out and run in different scenery. I’m not just running around in circles around a track.”

That’s not to say a cross country course is all rainbows and unicorns.

“The hills — I hated the hills,” she admitted. “I just wanted to stop. I almost fell over at one point. It just hurt. The hard part was just ignoring it and keep going. It was so worth it afterward, because you don’t regret it. You’re like, oh I made it, and that’s the best feeling.”