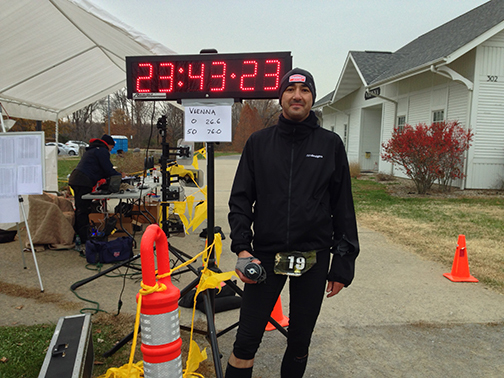 It’s summertime in Pahrump and the temperature is soaring above 101 degrees and so taking a jog around town during midday is not at the top of your list of things to do.

Joaquin Candel of Henderson is one of those runners.

This will be Candel’s first AdventureCORPS Badwater Ultramarathon and as a runner he knows this race will test every fiber of his body.

Candel is from Spain and thinks he has what it takes to run in Hell. He will be one of three runners from Nevada running in the Badwater race on July 28 at 7 p.m.

“I wanted to do this for the experience of the thing,” he said. “I originally got interested in the race by helping others fill out the application for the race and crewing the race for other runners. I crewed the race for the past three years. I also helped others with the forms for the cycle race that AdventureCORPS has in Death Valley.”

Candel didn’t start off as a runner and really as a sport it’s not even on the top of his list for things to do. He kind of took a roundabout way of getting into ultramarathon running.

“I am actually a better swimmer than I am a runner,” Candel said. “I started off running triathlons to keep in shape. And for that type of race you need to cycle and to run. Both my cycling and running need some help. So, I started doing ultramarathons to help my running. My original goal was to win the Badwater Cup.”

Candel can do regular marathons in four hours, which does not make him the fastest runner in the world, but he said speed is not his goal. For him it’s about endurance and just saying he finished.

The application process to get into the Badwater-135 race was tough for Candel. Just because he was a triathlete didn’t mean much to the Badwater committee handling the race. According to Candel, they wanted to see his ultramarathon experiences.

“To get into this race I did two winter events to qualify for Badwater,” Candel said. “I did the Arrowhead-135 race in Minnesota. This race is in the dead of winter and I had to drag a sled full of gear. Oh, and did I mention it was 40 below with wind-chill?”

He also did the Tuscobia-150 race, which is also a winter ultra-race in Wisconsin.

“I used winter events to get into Badwater,” Candel said. “My first winter event I failed to finish because I took a wrong turn and was lost for two hours. So I had to go to Wisconsin, but now I am hooked on winter events and I want to go to Alaska for an ultra-Yukon event.”

The enthusiastic Candel moved to Henderson with his family for work and he is a pilot, which allows him to travel to these events.

“I am a pilot and since I fly I can go to these winter places to train for the winter running,” he said.

He said living in Las Vegas helps him with his heat training. Candel is the only one in his neighborhood out for a midday jog.

“All I have to do is wait for the hottest part of the day to train,” the Badwater runner said. “Or I can go into my garage to train in 130-degree heat and do the bike.”

Activities like the Badwater race keep the pilot healthy.

“I ran my first half-marathon in 2006 for my health,” he said. “After running marathons, I went to the triathlon because it was less severe on my knee. But my knees were still an issue so I had surgery for a torn meniscus and now I am running more.

According to Candel, when you run ultramarathons it’s more of a mental thing than a physical one. Yes, you need to be in shape, but your mind must be in shape too.

“You have to convince yourself to do one more mile,” he said. “When I ran in Wisconsin, it was 17 below, I was miserable and I wanted to quit. I wanted to, but I would tell myself that I would quit at the next aid station, and when I got there I would keep on going.”

He said 18 of the runners started that race and only six finished.

“In my first Ironman I failed at the nutrition,” Candel said. “The day before I ate a lot and I thought that would be enough, but after that I failed so I decided to research nutrition to see which products were best for me.”

He said when he crewed he would ask runners questions and he was surprised that it was such a low priority with some of the runners.

“I mean I had some guys tell me that drinking Mountain Dew was all they did,” he said. “One runner even did pizza for Badwater.”

Candel found from all his questions that a lot of runners while they ran Badwater forgot to eat altogether or they ate a lot of solids.

“In my opinion, liquid calories is the way to go,” Candel said. “I think when running in heat the last thing my body needs to do is to digest something solid. I think the body uses liquid calories the best.”

He believes this year’s race will be a whole different game because the race starts at night and everyone will be starting after being awake for nine hours.

“I think the runners that are not from Nevada will have problems with the heat,” he said. “They just don’t understand the sun in our state. Your lungs take in oxygen differently. Your lungs in the desert heat have to get used to the hot air entering them.”

Candel’s crew chief will be his wife and he will also have two cousins helping him.

“Of course my wife doesn’t really understand why I do this, but she supports me and even gets into it when I am racing,” Candel said. “Once she gets into it she loves it.”