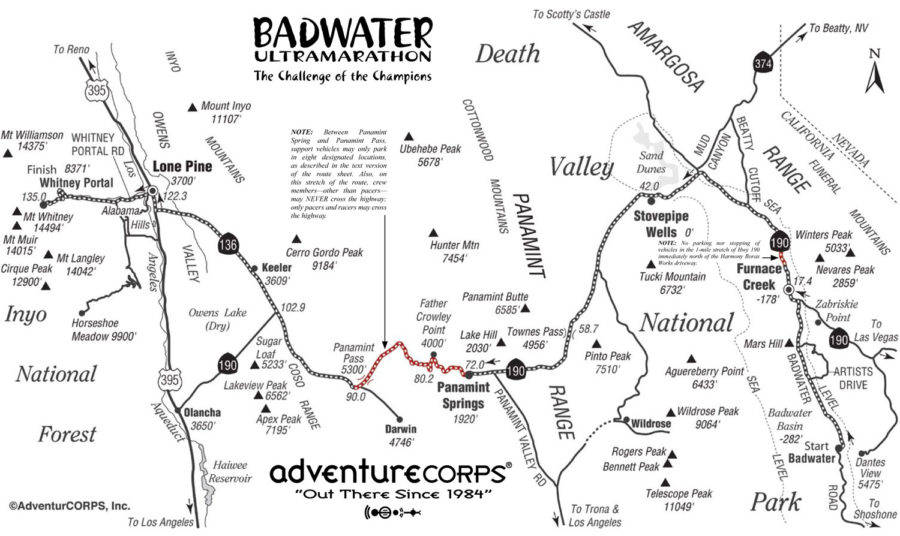 It’s billed as the toughest foot race on the planet.

Covering 135 miles non-stop from Death Valley, California to Mount Whitney, California, the STYR Labs Badwater 135 is one of the most grueling runs in the world and will be held on July 10.

The start line is at Badwater, Death Valley, which marks the lowest elevation in North America, at 280 feet below sea level. The race finishes at Whitney Portal at 8,300 feet. The Badwater course covers three mountain ranges for a total of 14,600 feet of cumulative vertical ascent and 6,100 feet of cumulative descent.

The average age of the runners is 46. The oldest runner is 70.

The first organized race was in 1987 between two teams, a U.S. team and a British team. And that first race only had five individuals in it, two males and two females.

According to the AdventureCORPS (race organizers) press release, there are some special runners competing in this year’s race.

■ Badwater legends Marshall Ulrich, 66, a twenty-time finisher and four-time winner will be running for his 21st race.

■ David Jones, 65, the 1997 Badwater 135 race champion, eight-time finisher, and 60-plus age group record holder, is going for his ninth finish.

■ Hall of Fame inductee Lisa Smith-Batchen, a nine-time finisher who was the women’s champion in 1997 and 1998 will try for her 10th finish.

■ Danny Westergaard, notched his 10th consecutive Badwater 135 finish in 2016 will receive a special plaque commemorating that effort before he toes the line again this year.