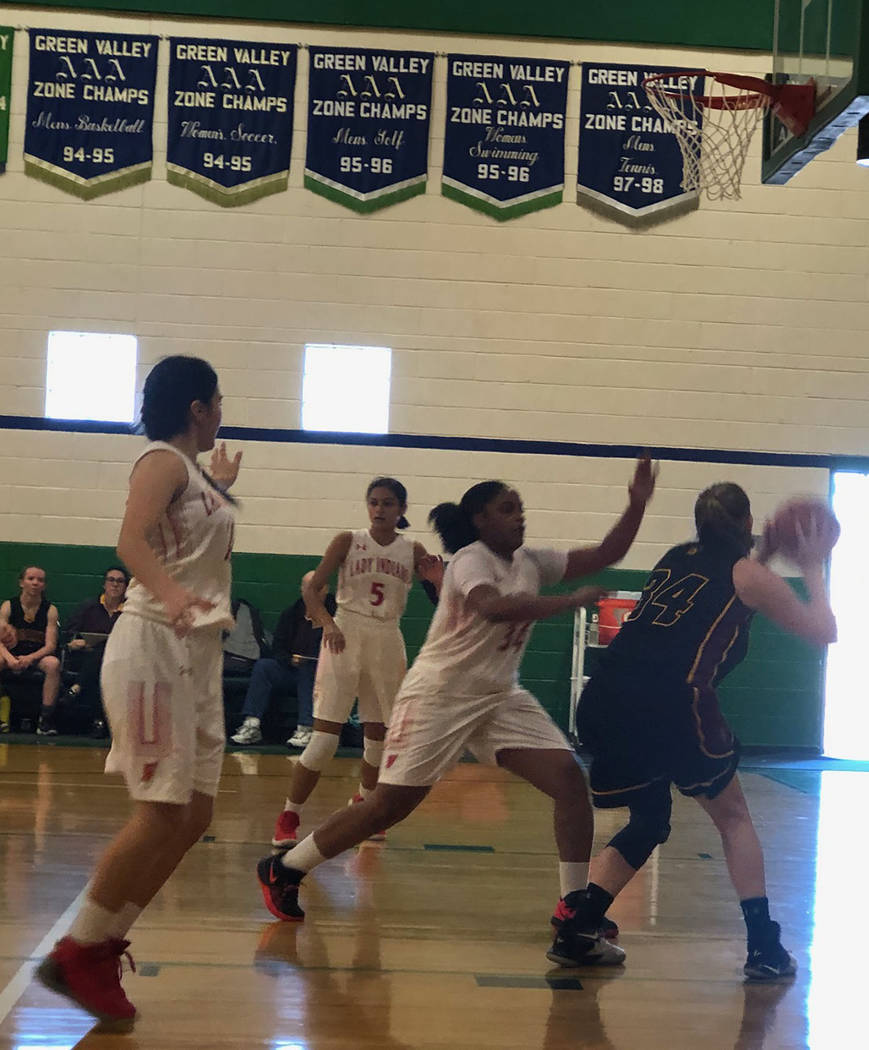 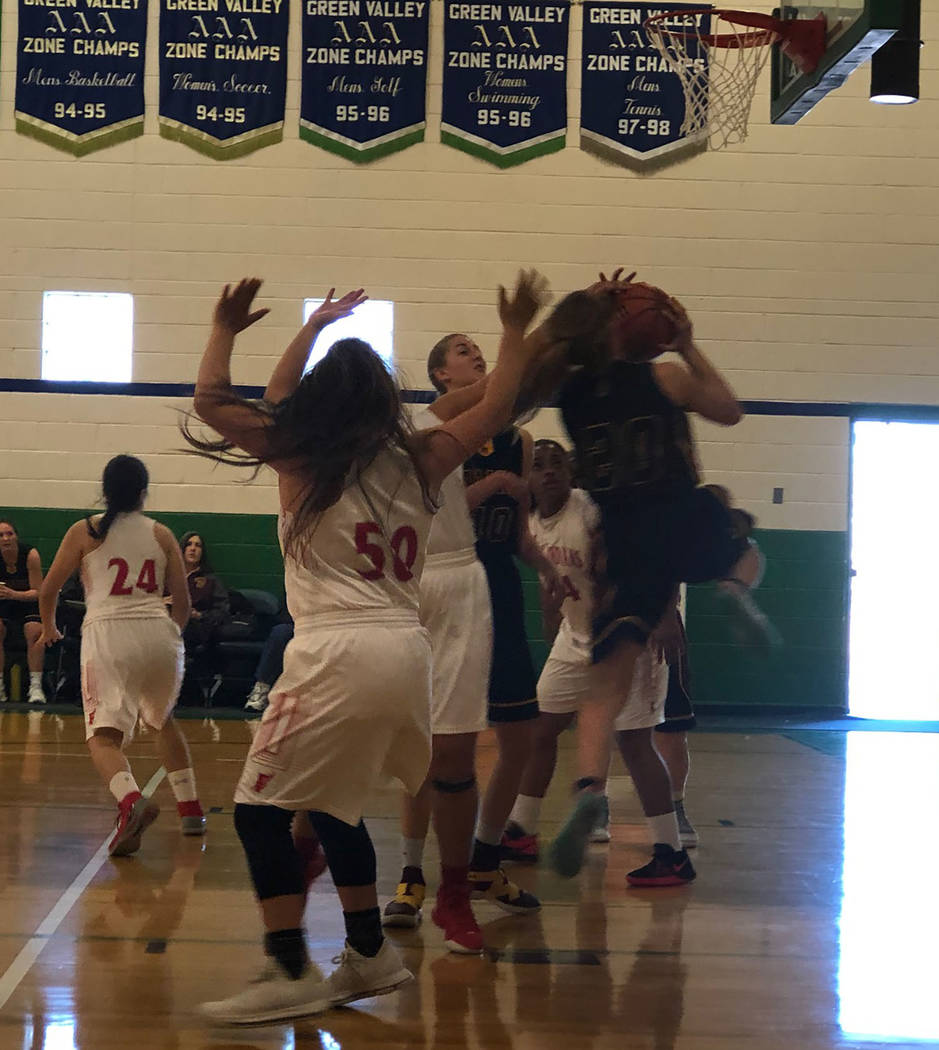 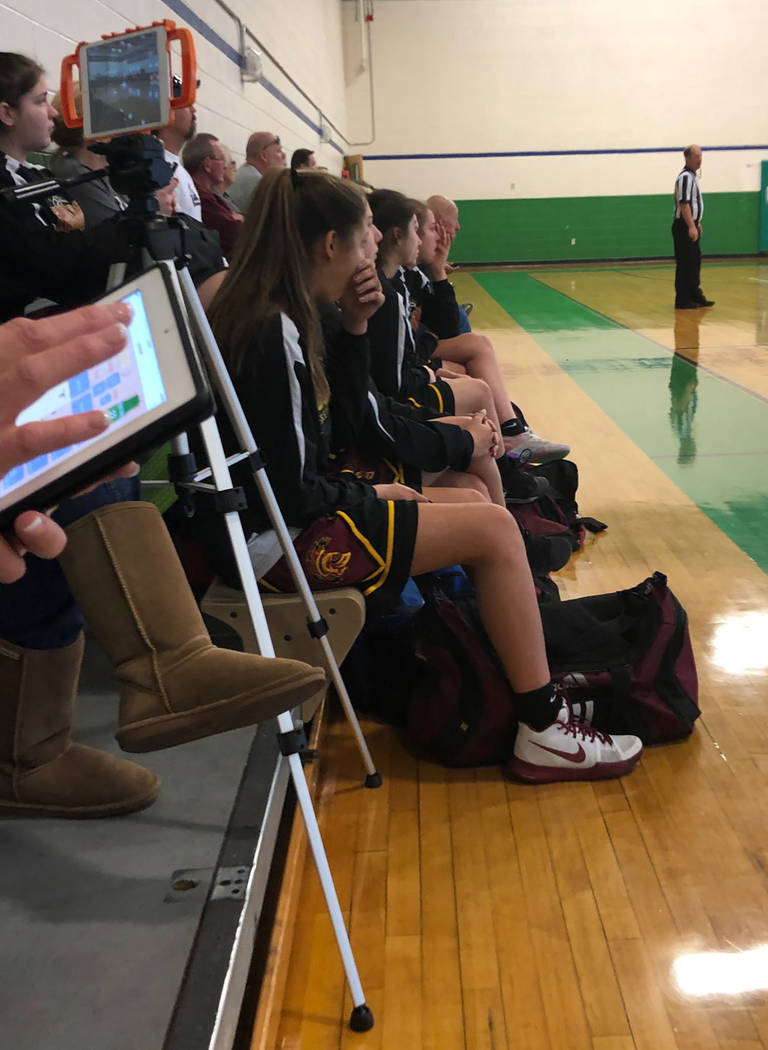 Perhaps the bleakest point of the Pahrump Valley girls basketball team’s season was quickly followed by some of its best moments.

After losing their first three games at the Gator Winter Classic in Henderson, the Trojans came out flat Friday against Fullerton, California, trailing 9-0 after the first quarter. Coach Bob Hopkins definitely had his players’ attention during the break.

“He said to get your heads out of your butts,” freshman guard Tayla Wombaker said. “Just wake up. We couldn’t finish, we couldn’t get past their defense. Nothing was going right.”

“He said we just need to be able to get ourselves together and wake up,” added sophomore forward Kate Daffer, who led the Trojans with 15 points in a 49-47 loss to Sierra Vista in pool play.

Whatever he said did not fall on deaf ears. The Trojans turned it around completely in the second quarter, outscoring the Indians 13-1 to take the lead at halftime and then methodically pulling away in the second half for a much-needed 37-25 win at Green Valley High School.

“I said we have to score so we can press,” Hopkins said of his message after the first quarter. “It’s really hard to press when you can’t score. We needed to get them moving, which gets us to move. Once we started scoring, we were fine.”

The Trojans ended up facing Fullerton because each team finished last in its group during pool play. Despite losing all three games in Group F, Pahrump Valley’s games were a mixed bag.

The Trojans were overwhelmed in the opener against Santa Margarita of California, then led Sierra Vista going into the fourth quarter before losing by two. They played well again for three quarters against British Columbia’s Yale before the bottom fell out.

“We probably played our best game of the year (Thursday) night, but then in the fourth quarter we couldn’t score and everything they threw up went in. We never made a field goal. It was a lot closer game then what it showed. With about four minutes left, it was a 2-point game.”

So after going 0-3 in pool play, the Trojans needed something to go their way.

“We needed to win,” Hopkins said.

“It was so important because we didn’t want to walk away losing all of our games, and we wanted the reassurance that we could do it,” said Wombaker, whose 9 points led the Trojans against Fullerton.

Even better for Pahrump Valley was how many players contributed to the victory. Eight players scored, with Maddie Hansen and Maddy Souza each scoring 7, Souza getting all of hers during the second quarter and Hansen following suit during the third.

Wombaker’s team-high scoring effort was the latest example of why Hopkins moved her into the starting lineup a few games earlier.

“Personally, I’m very surprised,” she admitted. “I’m a freshmen. I didn’t think I was going to start, let alone play more than three minutes a game. I just feel like this season is really going my way, and I need to keep working hard.”

Daffer also took a message of more work ahead from the Gator Winter Classic, which brought together 31 teams for four days of basketball.

“I always learn what I need to work on to get stronger,” Daffer said of the defeats during the event. “It’s nice to play against a good team so we need to know what we have to do better.”

The Trojans came agonizingly close to playing in the championship game of the Bronze Bracket, falling to Needles 40-39 on Saturday morning. The Trojans led by 5 points late and held a 35-32 edge in the final minute before the Mustangs (16-5) forced overtime. They then scored first in the extra period before Needles took a 40-37 lead and held on to advance to the bracket’s final, in which they buried Silverado 44-24.

Spring Valley was the tournament champion for the second year in a row, but Alaska teams left quite an impression. Dimond and Chugiak won their pools, with Dimond finishing second to Spring Valley overall, while West Anchorage won the Gold Bracket made up of teams that finished second in their pools.

Sharing third place with Virgin Valley in the Bronze Bracket left the Trojans at 11-10 overall with a busy week ahead of them. A Sunset League game Thursday at Del Sol is sandwiched around a Tuesday game at Chaparral and a Friday home game against Boulder City.