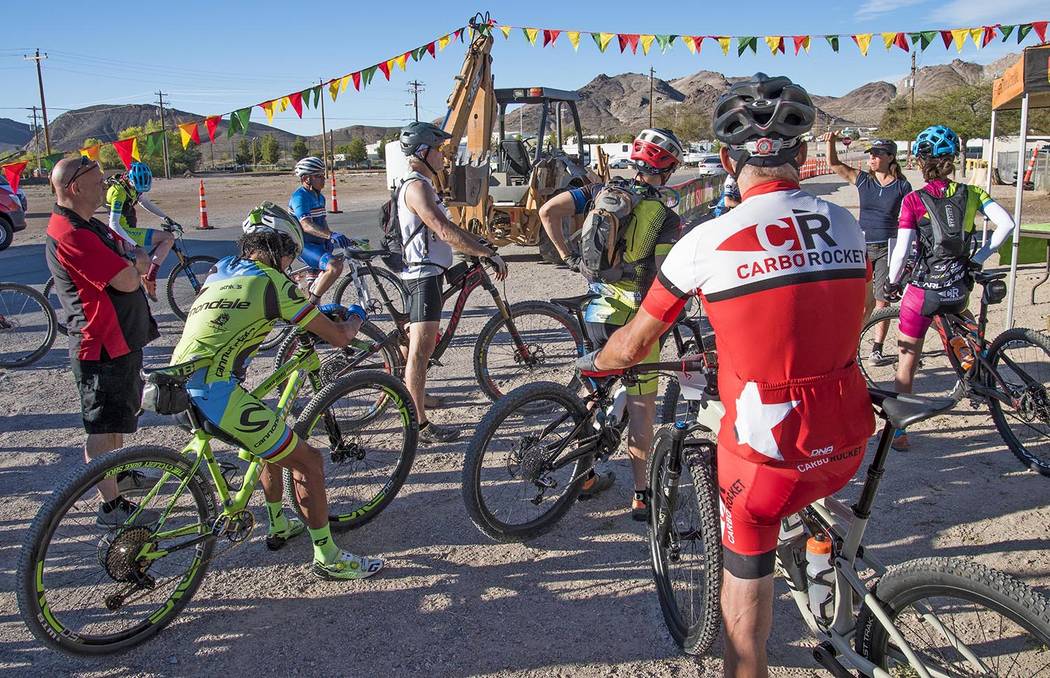 Richard Stephens/Special to the Pahrump Valley Times David "Tinker" Juarez (on green bicycle) listens with other cyclists to pre-race instructions Saturday before the second Barrick Tinker Classic in Beatty. Juarez won the 100-kilometer race in the event. 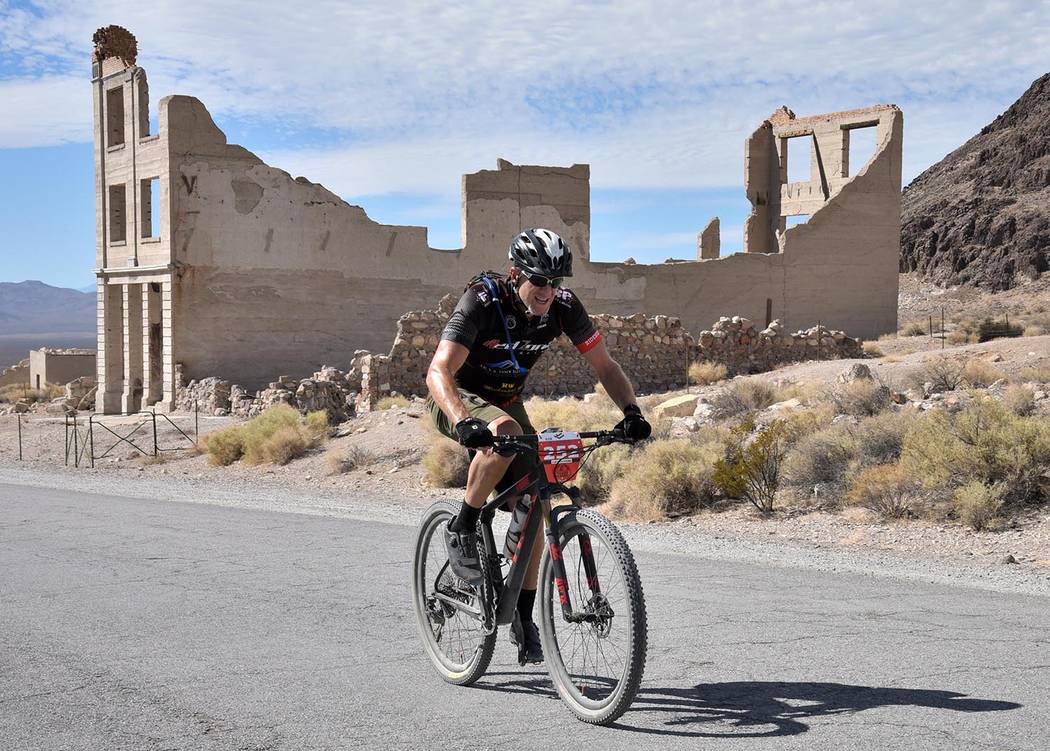 Richard Stephens/Special to the Pahrump Valley Times Robert Wenk, who won the 60-kilometer race, is the first to reach Rhyolite during Saturday's Barrick Tinker Classic, which began and ended in Beatty's Cottonwood Park. 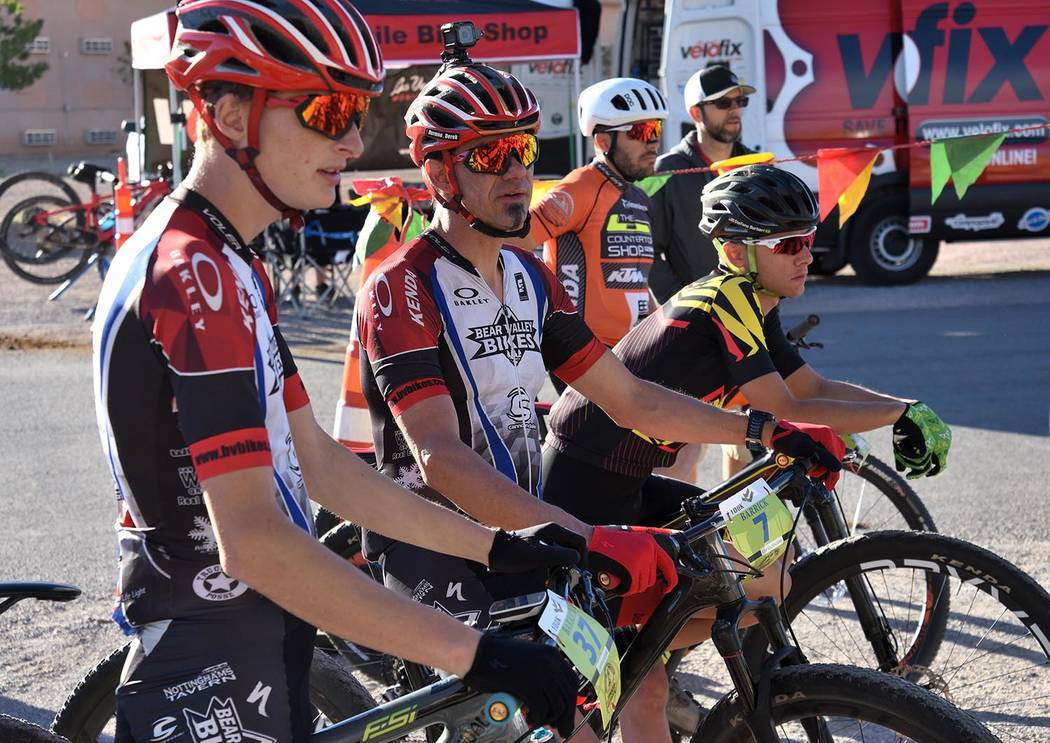 Richard Stephens/Special to the Pahrump Valley Times Cyclists listen to instructions Saturday before the start of the Barrick Tinker Classic mountain bike event in Beatty. 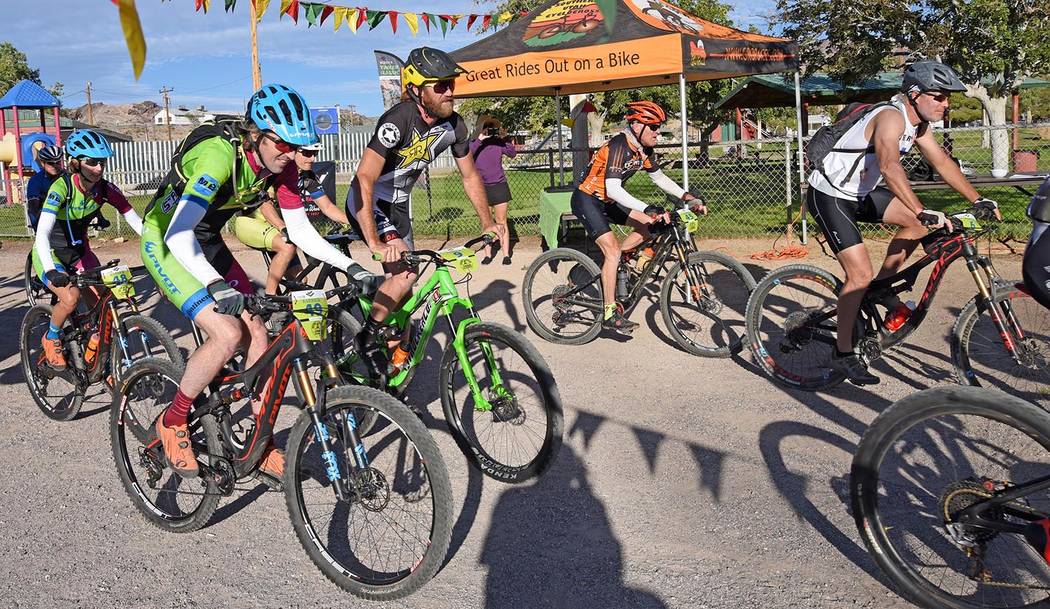 Richard Stephens/Special to the Pahrump Valley Times Competitors in the 100-kilometer event at the Barrick Tinker Classic start the race Saturday at Cottonwood Park in Beatty.

Their numbers might have been fewer than the year before, but participants in the second Barrick Tinker Classic mountain bike event Saturday were plenty enthusiastic.

This year featured two races: the 100K and the “Gravel Granfondo” at 60k. The 100K was won by David “Tinker” Juarez, the bicycling icon for whom the event is named. Robert Wenk, of Las Vegas, took first place in the shorter race.

Both races started and finished at Cottonwood Park in Beatty this year, rather than at Spicer Ranch. The courses took the riders through a wide variety of terrain and featured interpretive signage identifying points of historical interest, such as the Mayflower Mine and the Tonopah and Tidewater Railroad grade.

Samuel Brehm, from Big Bear, California, who finished second behind Juarez in the 100k, described the race course, which included a section in Death Valley National Park, as “challenging and really beautiful.” He said the most challenging parts were where there was loose, sandy soil, saying it was “laborsome to push through that stuff.”

Brehm, who usually competes on shorter courses, said it was his best performance in an endurance race. “I kept up with Tinker until Rhyolite,” he said. “Tinker waited for me quite a bit until it came time to win.”

Racer Jan Henke commented on the “really cool atmosphere” at Spicer Ranch, with free camping at night. She said it was unique to be riding “in the middle of nowhere.” She said the dunk tank at Mile 50 was awesome, and that her husband “jumped right in.” She enjoyed the course, except for the 40 mph wind that she encountered as she approached Rhyolite. “That was my dark moment.”

Derek Hermon, from Big Bear, said it was “a beautiful day, with good cloud cover and colors popping as we went through Death Valley.”

Many participants were more about enjoying the ride and the atmosphere than trying to win a race. Matt Hansvick and Damien Gusmeretti, for instance, chose to ride tandem bikes. Hansvick had a dummy strapped into the back seat, while Gusmeretti had his son, Isaac, riding behind.

“There’s so much history here,” Wenk said. “Great stuff. These rides are almost like being in a time machine.”

Referring to organizer and ranch owner David Spicer, Wenk said, “What Dave does up here is phenomenal. It’s great for the state of Nevada, great for Beatty, great for people. The hospitality here is fantastic. It’s a great chance to get away from the noise and bustle of Las Vegas and for friends and family to get together and have a great time. It’s a hidden gem.”

Wenk’s comments are evidence that Spicer and fellow organizer Cimarron Chacon are correct in their goal of producing an event that is much more than a race.

“We’re going for an event,” she emphasized. “We don’t want people to come, race and go. We want them to come and spend the weekend. From the minute they arrive until they leave, they feel welcomed and part of the community.”

Spicer said that the lower turnout this year could be attributed to a scheduling conflict. The Interbike Expo, the largest bicycle trade show in America, moved to Reno this year and was on the same weekend. Chacon said they are looking at moving the date of the Tinker Classic and are considering dates in March, April or October of next year.