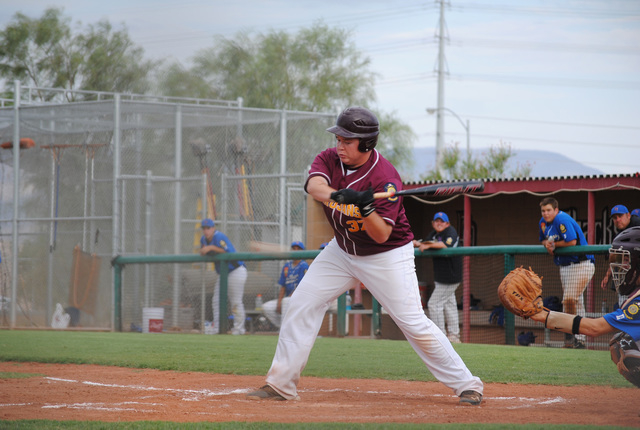 According to Trojans Coach Brian Hayes, the main purpose of summer baseball is to get Pahrump players serious about the game of baseball an opportunity to play competitive baseball in the summer. Competitive programs have success because of the work that they do during the off-season.

“The summer season is where we will work to improve the skills of our experienced players (18U) and introduce younger players (14U) to our high school program, and develop their fundamental skills,” Hayes said.

“Oftentimes, we played four to five times a week, sometimes, all five games were played different days of the week,” the coach said. “This was very burdensome for our parents, and we are hoping to alleviate travel expenses. It has also been very difficult to schedule home games for our American Legion schedule. Over the past three seasons, I believe we have played a total of 15 home games, with 12 of those games coming last year.”

Hayes said he had to stand in front of the board to beg for home games during coaches meetings.

“This left a sour taste in my mouth,” he said. “I’ve also been told by the American Legion director that it would be very unlikely that we would be able to play home games if we added a bronze division team (14U).”

Hayes believes Connie Mack will give his program more home games and this was a big enough reason to leave American Legion.

Alignment was another factor. The coach said the Silver Division in American Legion consists of mainly Division IV level JV programs, although a few IV and Division I-A teams have their varsity teams playing.

“Although we got beat up a little bit last season, we feel that the Connie Mack league will actually be stronger, and provide us an opportunity to play 10 games against Division I-A teams. Hayes said. “It will also give players who are entertaining playing in college an opportunity to play higher level baseball because I-A teams will play each other in addition to playing Division I teams.”

He added the I-A teams will have their own state tournament at the end of the season. The Connie Mack division also allows I-A teams to move up to Division I if they feel they can compete at that level (Spring Valley and Faith Lutheran will be doing that this summer). He compared this to the American Legion Gold Division. In that division he said this had to be earned by a complicated formula of performance and politics.

The Connie Mack league alignment will be as follows:

Hayes says Connie Mack will give his team some options.

If the valley can get enough players committed to the program, the plan is to have an 18U team, which consists of current ninth-12th graders (even graduated seniors), and a 14U team with current seventh to ninth graders. If they don’t have much interest with our upperclassmen, they will have a 16U and 14U team.

The benefit of Connie Mack is that teams can change leagues according to their numbers or their talent level.

“If we have a team that we think can compete at a high level, we can move into Division 1,” Hayes said.

According to Hayes, the overall costs are very similar.

“I will say that what we charge is almost half of what any program in Las Vegas charges. Last season, the cost to play on our Silver team was under $150 per player,” he said.

Costs can be offset by fundraising efforts or donations from the community. Examples of donations in years past included donations from local businesses such as AT&T, Lakeside Las Vegas, Valley Electric, The Pahrump Nugget, and P-town Air. The coaches would like to do a little more fundraising this summer to compensate the coaches, who dedicate countless hours to our summer program. Currently some coaches are paid for summer programs in Las Vegas. Pahrump has never compensated coaches.