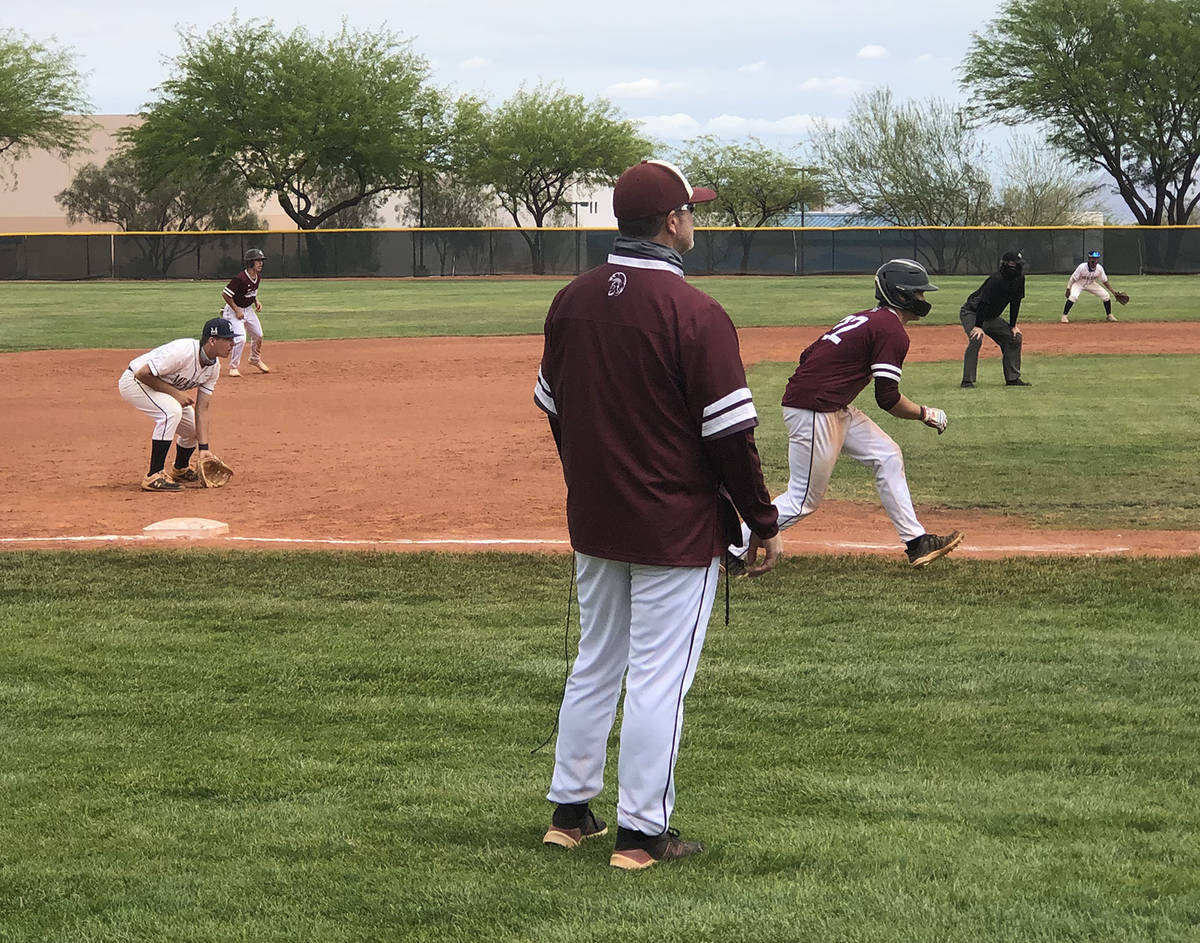 Tom Rysinski/Pahrump Valley Times Pahrump Valley High School baseball coach Brian Hayes watches as Zack Cuellar takes a lead at third while Scott Hirschi does the same at second during the second inning of the first game of Monday's doubleheader at The Meadows. 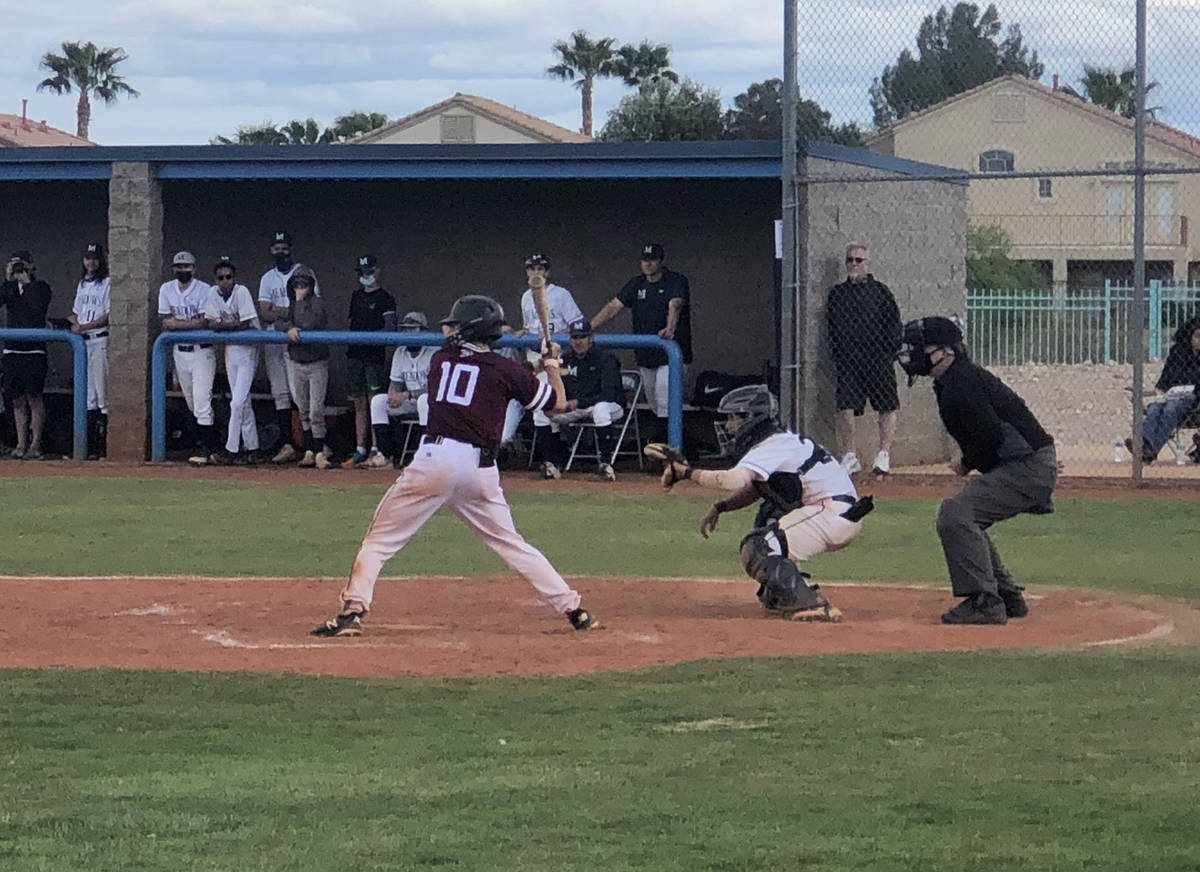 Tom Rysinski/Pahrump Valley Times Junior catcher Coby Tillery takes his turn at bat during Pahrump Valley High School's doubleheader Monday at The Meadows in Las Vegas. The Mustangs won the opener 6-5, while the Trojans rallied to win the second game 4-2. 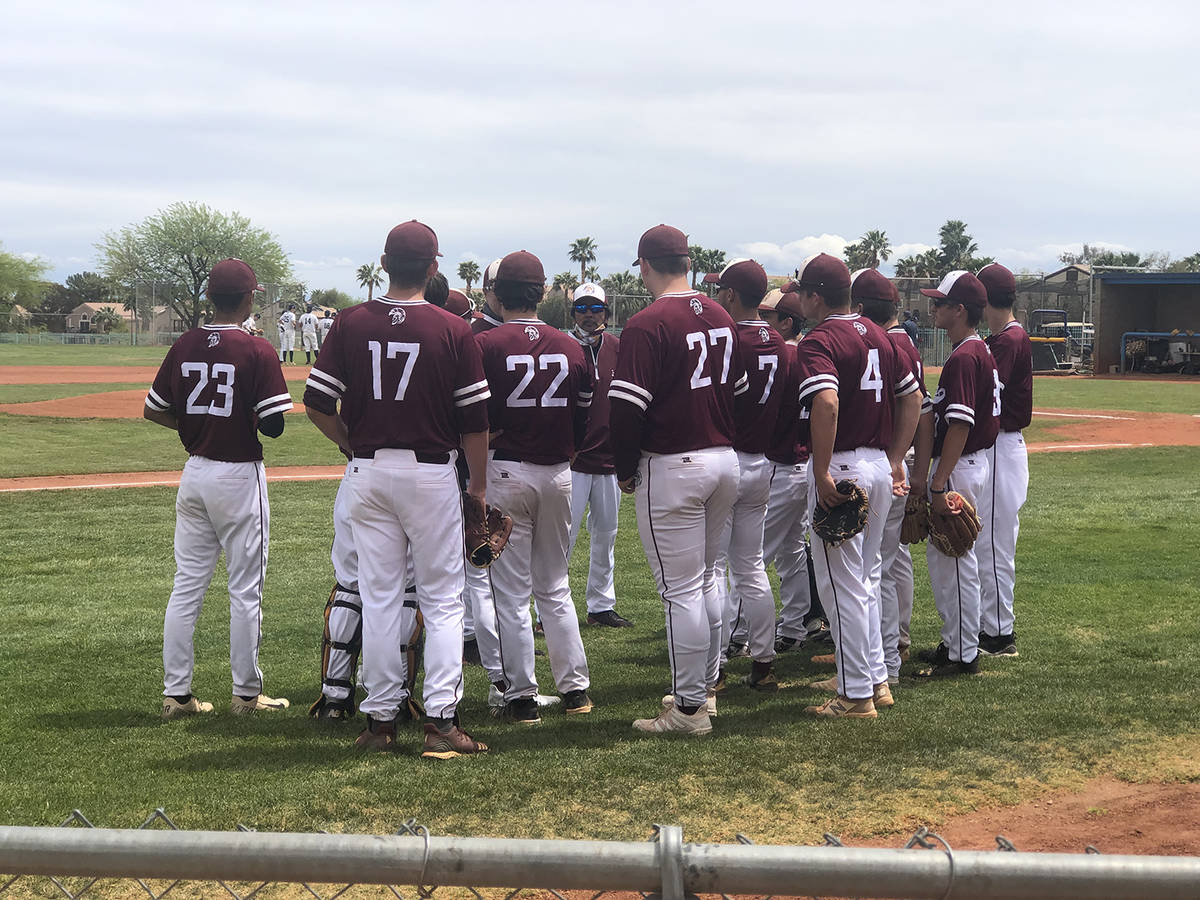 With the Pahrump Valley High School baseball team down to its last strike, trailing The Meadows 2-0 after losing 6-5 in the first game of Monday’s doubleheader in Las Vegas, junior right fielder Zack Cuellar found himself in exactly that situation.

“Looking for anything, anything close,” Cuellar said of his approach. “I didn’t have a really good day today, so I just had to come through for my team.”

And he did, sending a single into left field that scored James Metscher and Fidel Betancourt with the tying runs.

“It was a change-up, an outside change-up,” Cuellar said. “I took it the opposite way, the only way I could have taken it.”

Cuellar headed toward second on the throw, and when Mustangs pitcher Aiden Otano threw back to second trying to head him off, the throw sailed into the outfield, sending Cuellar, the go-ahead run, to third.

Enter Kyle McDaniel. The sophomore was having a good game, with two infield singles and a double in his three at-bats.

“I was just looking to hit the ball over the shortstop’s head,” McDaniel said. “They had big gaps open, so I was just shooting the gap.”

McDaniel did a bit better than that, sending a shot deep into left-center field that a lunging center fielder could not handle, allowing Cuellar to jog home with the tie-breaking run. McDaniel wound up on third.

Otano, The Meadows’ starter was relieved by another freshman, Tanner Woods. Woods sent his first pitch all the way to the backstop, and McDaniel scored an insurance run that, as it turned out, the Trojans didn’t need.

McDaniel himself saw to that, relieving Scott Hirschi in the bottom of the seventh. McDaniel made quick work of the Mustangs, striking out the first three batters he faced — the second one reached on a missed third strike — and getting the fourth to hit a routine ground ball for a force at second to wrap up a 4-2 win that snapped the Mustangs’ seven-game winning streak.

“Scott set us up,” McDaniel said. “He kept us in the game the whole way, and all I had to do was throw strikes and my defense would cover me. It wasn’t that much pressure.”

Hirschi was outstanding, allowing 2 hits over the first five innings before running into trouble in the sixth. Even then, bad luck played a role. After a one-out walk, freshman catcher Derek Bain — who homered in the first game — sent a soft pop fly just a bit out of reach of everybody near the foul line in left. One out later, Otano sent a grounder deep in the hole at short that McDaniel fielded but had no shot to make a play, ending the scoreless tie.

Woods then hit a clean single to left to score Bain for a 2-0 lead, setting up the dramatic seventh.

“It was a good way to win,” Pahrump Valley coach Brian Hayes said. “We hadn’t done much with the bat all day long. … It’s a good way for us to figure out that we have until the last strike, the last inning, the last out of the game, and I hope they understand that because we’re probably going to be in the same position before the end of the year but for higher stakes.”

The first game was sloppier. Only 2 of the Trojans’ 5 runs were scored with an RBI — one when Cuellar drew a bases-loaded walk in the third and the other on an extra-base hit by freshman Justyn Ybarra that pulled the Trojans within a run in the top of the seventh. Ybarra wound up on third, but the Mustangs appealed, saying he missed second base, and the umpire agreed, bringing out Hayes for a lengthy discussion on the matter.

The Trojans kept their sense of humor about it. After Ybarra singled to lead off the second inning of Game 2, a voice yelled from the Pahrump Valley dugout, “Make sure you’re on the base.”

An inning earlier, it was the Mustangs in a giving mood. With two outs and nobody on, Metscher walked and McDaniel singled to center to bring up Jalen Denton, who sent what looked like a harmless fly ball to left. But freshman left fielder Ben Garber dropped the ball, allowing both runners to score and tying the game at 4-4.

Betancourt worked his way through five innings, which, like Hirschi’s six innings in the second game, was something the Trojans needed desperately.

“This week is one of those weeks where you have to have pitching,” Hayes said. “We played two today, we have two (Tuesday), and we’re bringing all of our sophomores and our junior pitchers to Gorman. Then we play Wednesday, Thursday and a doubleheader Saturday.

“We were really tough on our pitchers, and they did a really good job. Fidel came out there and he had a blister, and I was kind of like, ‘Dude, you have to battle through because we don’t have a lot of depth,’ and he did. He went five and then Scott threw the last (inning) of the first (game). We made a few mistakes behind him, and then he pitched great the second game.”

Pahrump Valley was the first Class 3A school The Meadows faced this season. The Mustangs (7-2) had not lost since their opener against Lake Mead Christian.

“This team is better than most of the teams we face this year as far as the pitching goes,” Hayes said. “The pitching that we saw in that first game was pretty legitimate pitching. … in the second game I think we should have adjusted to the pitcher and did a little bit more with our at-bats. We had too many wasted at-bats and had the pitcher kind of dictate what’s happening instead of us understanding that we control the plate and not them.”

Hayes said he couldn’t remember the last time the Trojans pulled off a winning rally so late in a game, and his players grasped the meaning of it.

“It sets us up good for the rest of the week,” McDaniel said. “We’ve got some good momentum now. We have Boulder and we play two league games, so I think we should be able to take this momentum and keep it going.”

“It shows us that we can come through in clutch situations,” Cuellar said. “We’re definitely an offensive team. Finally having a game that we’re not getting the hits that we need but knowing we can push across a run is just amazing. Feels good when it happens.”