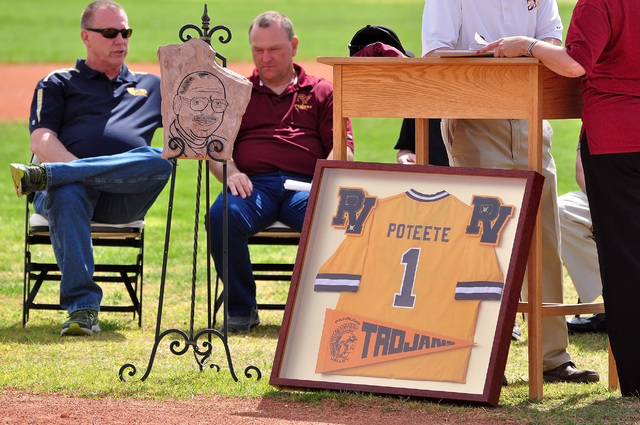 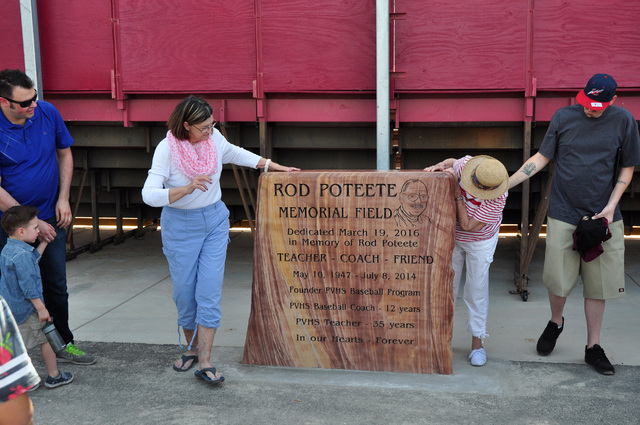 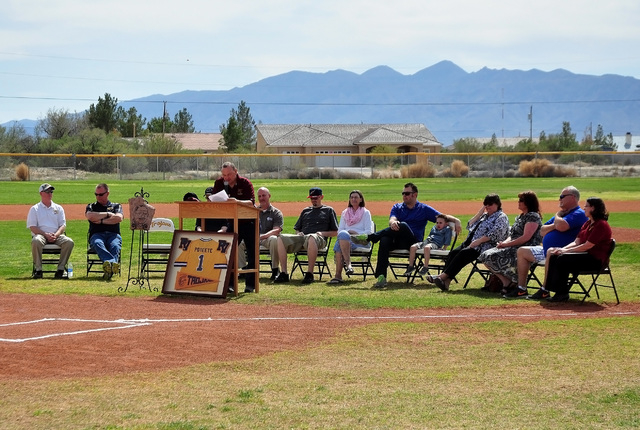 On Saturday, Rod Poteete, a former Pahrump Valley High School teacher and coach, received one of the highest honors that a school can bestow on a former teacher. The high school dedicated the baseball field in his name.

Of course it wasn’t just any field. To Poteete, this field was his “Field of Dreams,” for he was a man who was passionate about baseball. At the beginning of Pahrump baseball, he started the field. He was the first baseball coach the high school had. Things were different back in the 70’s. Poteete had to scramble for money and equipment. The school was so cash-strapped that he even donated an old garage door he had lying around for the first scoreboard.

Many friends and family and Rod’s former baseball and basketball players were in attendance as the field was renamed “Rod Poteete Memorial Field.”

The former coach passed away in July of 2014 from complications due to cancer.

He was an extremely dedicated teacher and coach. His journey in education began in 1975 and lasted until 2009. He started teaching as a driver’s education instructor and health teacher. He then taught co-ed physical education and computer literacy.

Before he started teaching, Poteete played for the L.A. Dodgers’ minor league team in 1968 until he hurt his shoulder.

The stands were full of people who wanted to share this moment with the Poteetes and the community.

Mike Floyd, a member of Poteete’s baseball team, opened with how honored he felt for being asked to help dedicate the field to Poteete.

“As many of you know, when Mr. Poteete first arrived in Pahrump to start teaching, we didn’t have a baseball program. Mr. Poteete started our program from the ground up, literally,” Floyd said. “We didn’t have a baseball field in those days, so the first few days of practice were spent preparing the field at Petrack Park. Any boys that wanted to try out for the team had to put in the work on the field to make the first cuts. In my junior year, someone graded off an old hay field behind the high school, threw down some Bermuda grass seed, and coach Poteete had a new home baseball field.”

Floyd said back then players had to pull weeds, cut out the base paths, and fix the back stop.

“Coach Poteete even dragged out his old garage door and stood it up on the left field line as our scoreboard. He painted it up real nice and made numbers for it and it looked pretty good,” Floyd said. “Coach Poteete was able to start a program from nothing and in five years’ time had a team in the championship game.”

Floyd closed saying Poteete always remained active and interested in all the athletic programs at PVHS all the way up to his retirement a few years ago.

“I know I speak for all his former students and players when I say we are proud to help name this facility after Coach Poteete so his legacy at PVHS will always be remembered.”

The coach’s family unveiled a stone in front of the field with the words “Rod Poteete Memorial Field,” engraved at the top and a dedication to Poteete underneath.

“It took us a day to do this and of course it brought back good memories,” Murphy said. “I got involved because Sherry called me asking for a stone. I didn’t have one but I was happy to help install it.”

After the speeches, Poteete’s family received a glass case with Rod’s jersey and letters that the PVHS administration felt essential to present to the family. They also received a medium-sized stone with the coach’s face engraved on it.

Dr. Kim Friel, assistant superintendent of the school district, said that she had known Poteete since 1982. Dr. Friel and her husband, Jim, are Poteete’s youngest son’s godparents. Dr. Friel shared some of her memories.

“When our sons were about seven, the kids were starting to use the pitching machine,” Dr. Friel said. “Rod would sit there and drop the balls in the machine at different angles and see which angle each kid would hit off of better.”

The coach was a collector. Poteete collected everything that had to do with sports in Pahrump and donated his collection to the Pahrump Museum. One of his former players, Mike Empey, said that Poteete had a picture of the players in action and their stats from the season, along with their overall stats and he would do that every season.

Poteete also enjoyed photography. He would take pictures at school events and give the students and faculty their pictures. His office was covered in pictures taken before the school was remodeled.

The retired teacher was married to his wife Jean Poteete for 38 years, and they were together for 42 years.

Jean Poteete described her husband as a walking encyclopedia.

“He knew everything about sports and he wasn’t the type to argue with you,” she said. “Well, he would, he just wouldn’t hold a grudge. He loved this town. He would tell anyone who would listen about it.”

Jean Poteete said her best memories were anytime the community had a sporting event, her husband would bring treats for the kids and anytime they won, she would bake a cake. She said that the team and the town were like a family to Rod.

The high school and the community of Pahrump will forever remember this dedicated man, Rod Poteete. He probably still is the Trojans’ number one fan and is still watching every game.