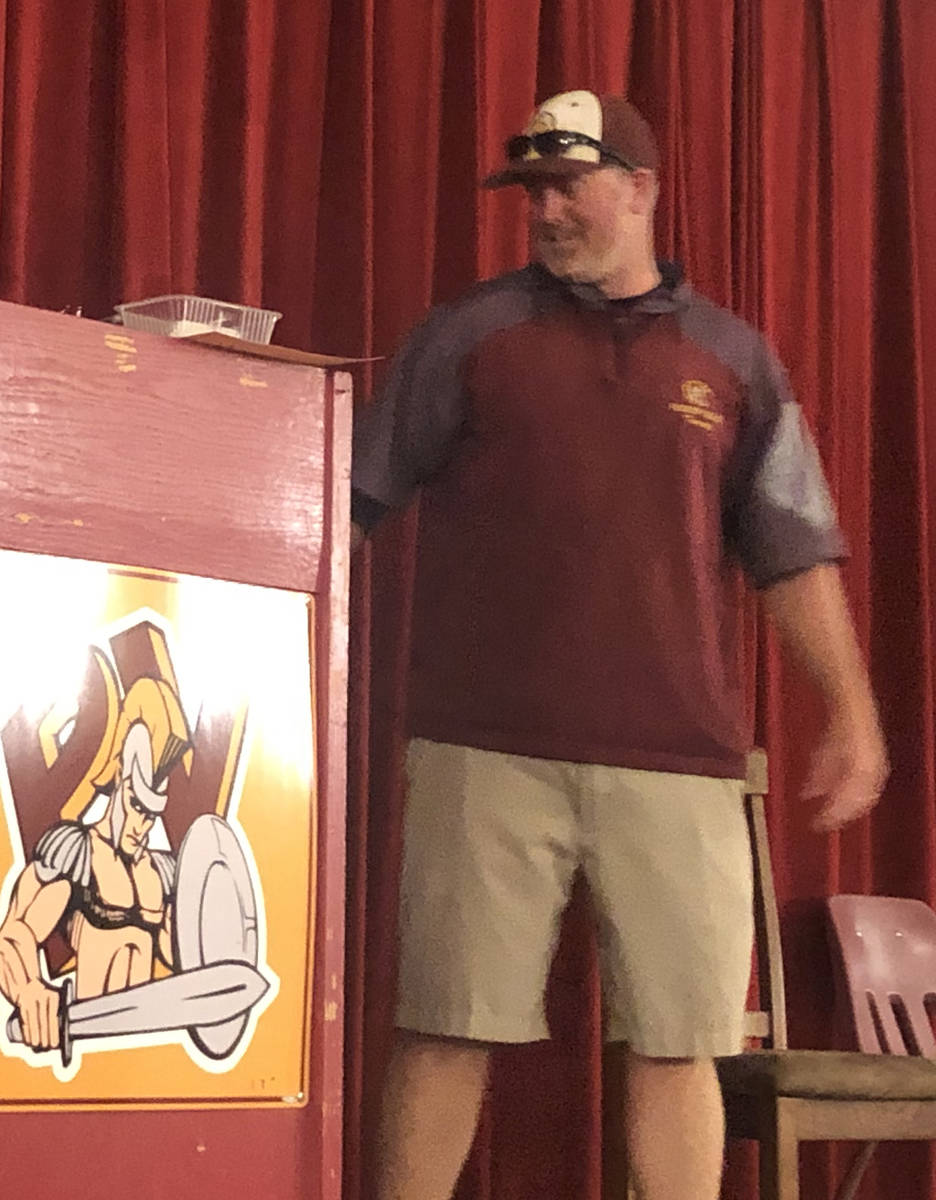 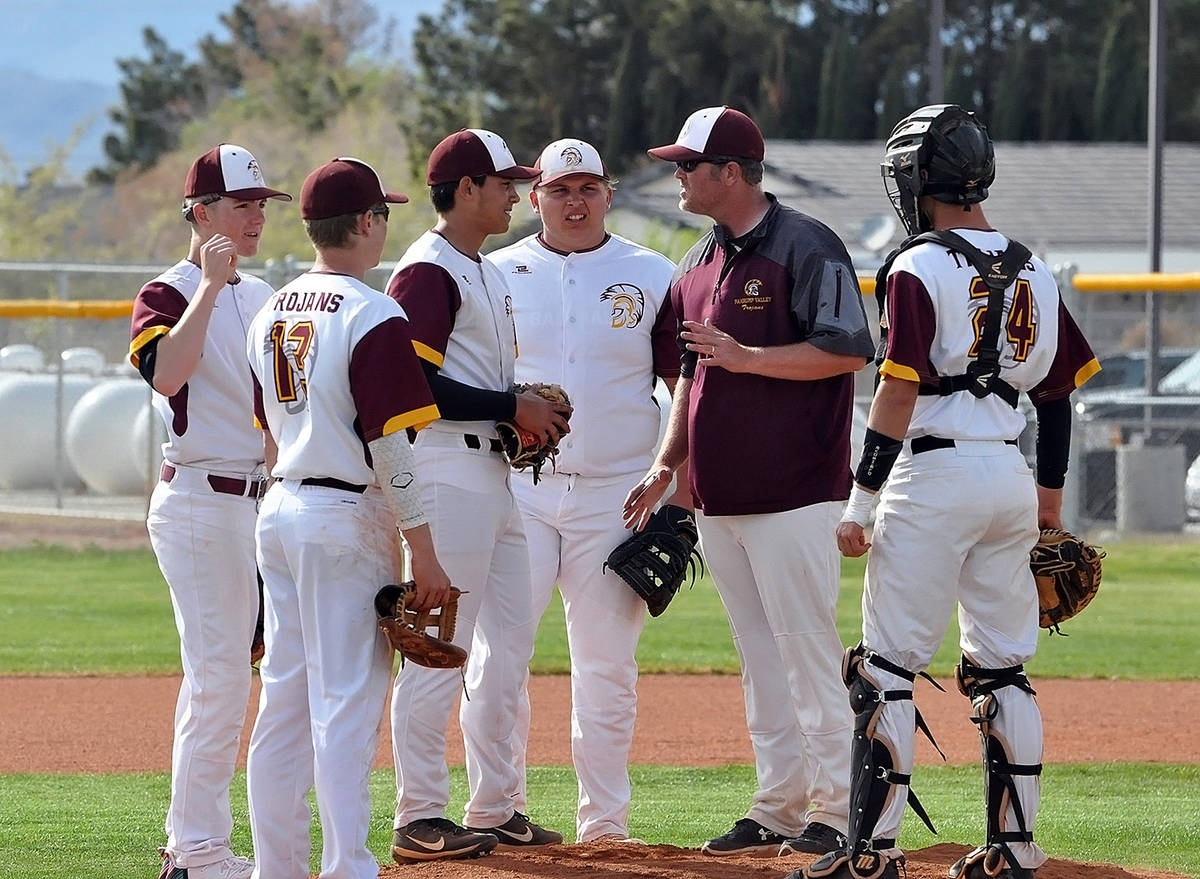 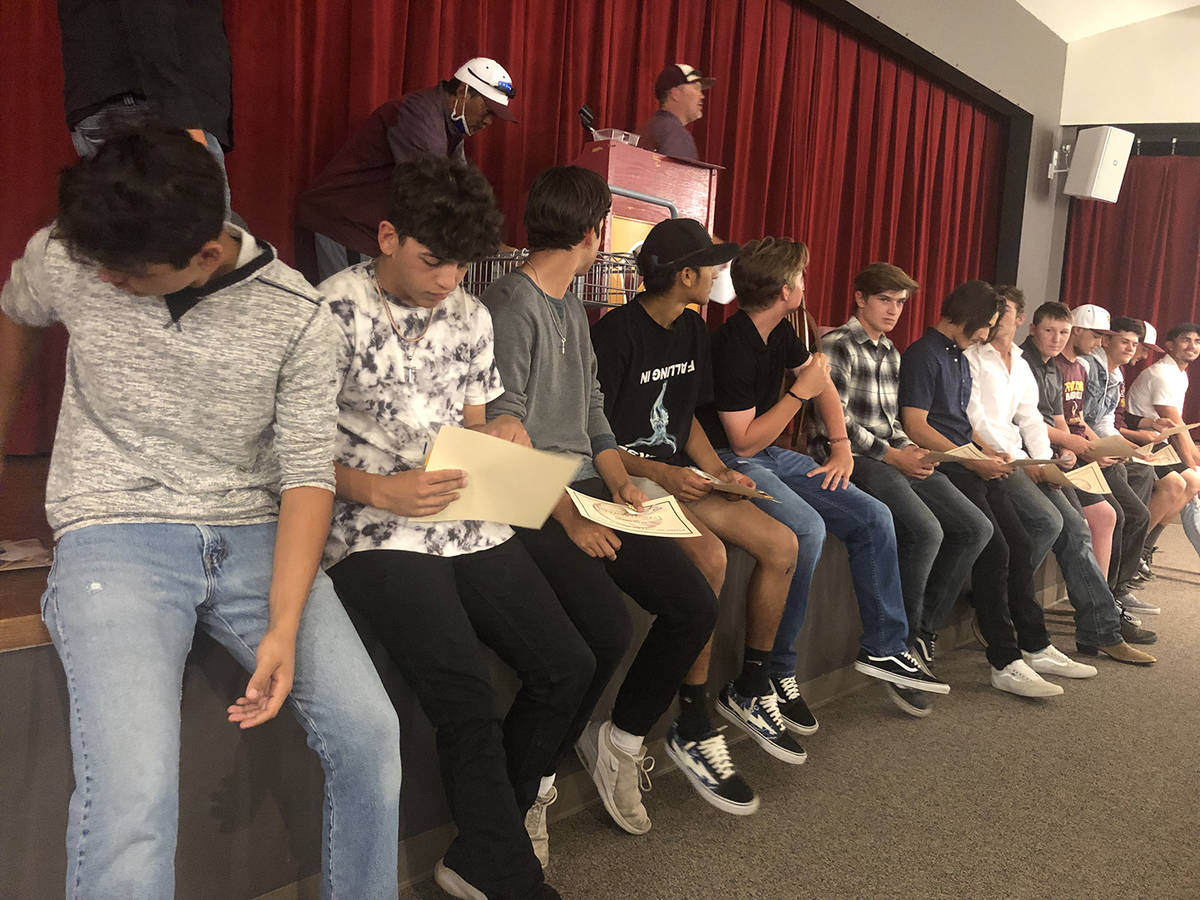 The time turned out to be Wednesday evening at the Pahrump Valley High School baseball team’s awards night, as coach Brian Hayes announced he was stepping down, effective immediately.

With three young children involved in sports, it was only a matter of time before Hayes had to decide when his actual family needed more of the time he had been giving to his baseball family.

As it turned out, picking a time to tell everyone was as tricky as picking a year to do it.

“I don’t know if this is really the time or place to do this,” Hayes said after handing out end-of-season awards. “I was going to try and talk to our boys after the Boulder City game (Saturday). I didn’t feel that was the time or place either because that was our seniors’ last game.

“But as of right now, I am going to be stepping down as varsity baseball coach. What I want my boys to understand from this is that I love baseball, and it’s going to be tough for me not to be around baseball, but I also love my family. What I want you guys to realize is that at some point in time you’re going to have to make the decision on what’s best for your family.”

It wasn’t just time spent away from his family that led Hayes to decide the timing was right.

“I spent a lot of time on the field, and off the field I find myself always thinking about what I’m going to be doing, and that takes away from the time I can spend with my own family,” he said.

Hayes thanked a lot of people for their help and support.

There was the athletic department — Athletic Administrator Jason Odegard, Athletic Director John Toomer and athletics secretary Jennifer Shockley — and noted that he had seen assistant principals Desiree Veloz and Kenny Weaver at the field. “We would like to thank them for all of the work they put in,” Hayes said. “There’s a ton of things that happen behind the scenes that we truly appreciate.”

Then there was custodian Greg Leseberg, whom Hayes credited for helping assistant coach Roy Uyeno take care of the baseball field; game announcer Tom Grossell, whom Hayes said helps give the Trojans the best home game baseball atmosphere of any program we played at this year; the bus drivers, who “do an awesome job of getting us there but also letting our kids be kids on the bus, and we appreciate that,” Hayes said; and team manager Madison Lee, who “does a lot of the things we don’t want to do. The answer was always yes.”

Above all was his family — wife Kristi and children Jaycie, 9, Kannen, 7 and Hudson, 5 — his coaches, players and their parents. Hayes said he got to coach his kids in baseball and softball this season, and expects to “live at the Little League fields and the softball fields.”

Hayes said he had pondered leaving last season, but with the season lost to the COVID-19 pandemic, the timing didn’t seem right.

“If I were to leave, it would be hard to be a coach and have eight weeks, 10 practices, to and get what you want done,” he said. “If I was a coach coming in, I would want some offseason. That’s the main reason I decided to do it this year.”

Related to that reason was the fact the pandemic robbed Hayes of time with his players, meaning there were quite a few players with which he hadn’t had the coaching time to develop his usual relationships.

“I feel like it would be a good transition year,” Hayes said. “It’s a little easier for me to leave because I don’t know these kids as well as I normally would. Our freshman group, even our sophomore group, we hardly even got to coach them.”

But no Trojans have attained the ultimate goal: a state title.

“I’ve been coaching here for 10 years,” Hayes said. “I still think … when we have guys understand how important it is to put other guys in front of ‘me,’ that’s when we’ll win a state championship. That’s my opinion as the head coach. In 10 years I’ve been here, that’s why we haven’t won a state championship, because we still have a couple of ‘me’ guys instead of some guys who are putting other people above themselves.”

According to NevadaPreps.com, Hayes leaves with a record of 153-104-4, including league titles in 2017, 2018 and 2019. The 2018 team was the first Pahrump Valley team to reach the state tournament since 2007. The Trojans won just two games in 2012, the year before he took over, but have posted seven winning seasons since.

Hayes said that he felt he has taken the program as far as he can and it was time for someone else to make the final push.

“I look forward to seeing you guys have success in the future,” he said. “I hope that I can bring my boys in and you guys can treat them like they’re still part of the family. … I feel like we have an awesome baseball community.”