Danny Smyth/Pahrump Valley Times Pahrump Valley Trojans pitcher/shortstop Kyle McDaniel (2) sliding into home plate as part of the Trojans' 4-run fifth inning against the Virgin Valley Bulldogs in the second round of the 3A Southern Regional tournament on Tuesday, May 10, 2022. 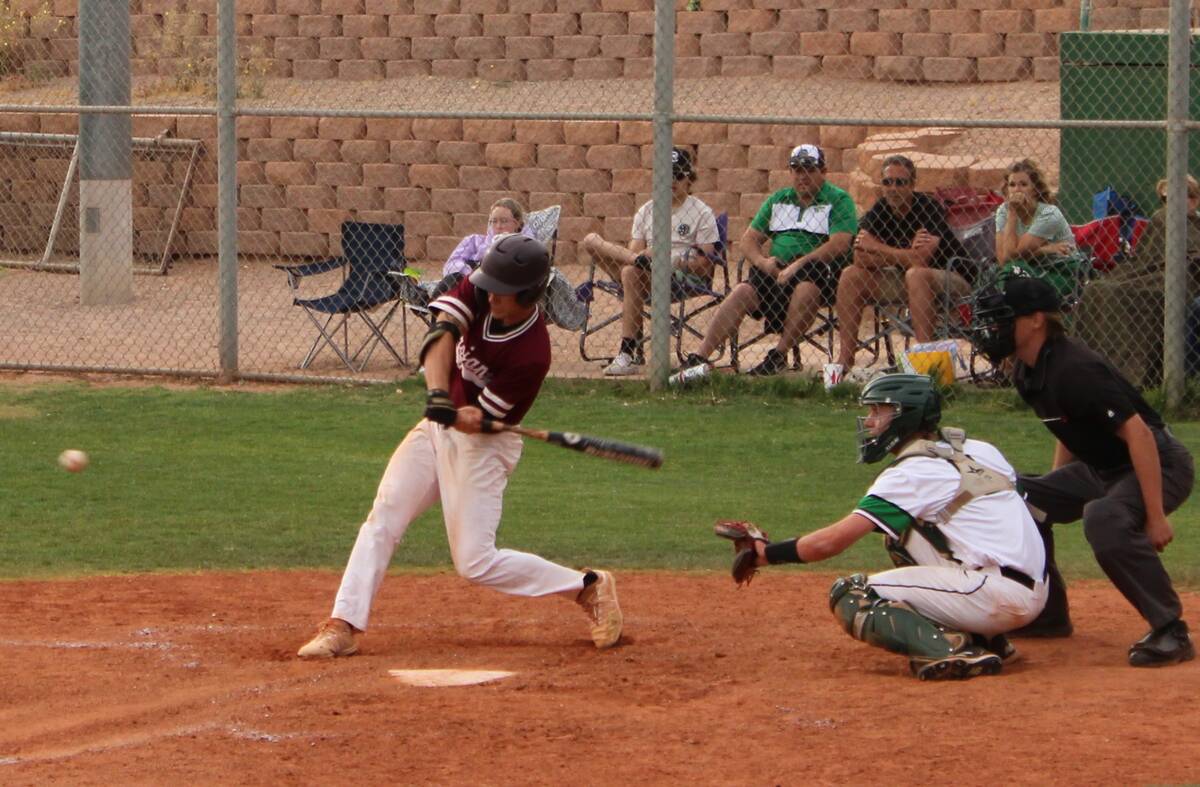 On Monday, the Trojans defeated the Clark Chargers by a score of 8-1. Junior Kyle McDaniel and senior Zack Cuellar guided Pahrump to the win with big days in the batter’s box.

After getting a first round win, the Trojans advanced to the second round of the winner’s bracket to face off against the Virgin Valley Bulldogs.

The Trojans defeated the Bulldogs 11-0 early on in the regular season. This would not be the case for their playoff game.

After jumping out to an early 3-0 lead in the top of the first inning, the Trojans gave back two runs to the Bulldogs at the bottom of the first.

Those would be the only runs until reaching the top of the fifth inning.

In the fifth, Pahrump Valley took advantage of subpar pitching by the Virgin Valley pitchers.

A 2-run single by Cuellar helped the Trojans bust the game open and take a 7-2 lead. However, that lead wouldn’t last too long.

After a string of mental and fielding mistakes in the bottom half of the sixth inning, the Bulldogs climbed their way back into the game with a 4-run sixth inning to cut the lead down to 7-6.

Following McDaniel’s exit from the game, the Trojan pitchers had a tough time finding the strike zone.

Virgin Valley was able to load the bases in three of the last four innings.

While being down 7-6 in the bottom of the seventh inning, the Bulldogs tied the game on a wild pitch with the bases loaded. This would send the game to extra innings.

Virgin Valley went on to score the game winning run on a bases loaded walk in the bottom of the ninth inning to win the game 8-7.

This sent Virgin Valley on to face Moapa Valley in the final game of the winner’s bracket and Pahrump Valley was sent to the loser’s bracket to face SLAM.

On Wednesday, the Trojans hosted the SLAM Nevada Bulls in the second round of the loser’s bracket.

McDaniel got the scoring started quickly with a 2-run home run in the bottom of the first inning.

Justyn Ybarra got the start on the mound for the Trojans. He pitched 3.1 innings, giving up four runs on two hits. All four of the runs came in the fourth inning as part of SLAM’s 5-run inning.

Despite giving up four runs before he left the game as a pitcher, Ybarra redeemed himself when he came up to bat in the bottom of the fourth inning with a 2-run single.

The Trojans had multiple big leads in this game, but they just weren’t able to hang on to them.

The Trojans would remain scoreless in the fifth and sixth innings, however, the Bulls kept scoring.

In the bottom of the seventh, Dallton Norland got the ball rolling with a leadoff home run to bring the Trojans to within one run.

After two batters got on base, McDaniel came up with another huge hit for the Trojans. He drilled a shot to center field, which brought in the tying run. Following that hit, the Bulls intentionally walked Cuellar to load the bases.

The next batter for the Trojans, Dustin Lopez, would be hit by a pitch, bringing in a run to give the Trojans a 12-11 win.

With this win, Pahrump Valley moved on to the third round of the loser’s bracket.

As I’m writing this on Thursday morning, the Trojans are getting ready to play a potential double-header with their season on the line. Win and advance, lose and they’re out.

First opponent up for the Trojans was the Boulder City Eagles. A team that Pahrump would like to get some revenge against after two regular season losses to the Eagles.

If the Trojans were able to get by Boulder City, they’ll have played a second game on Thursday against Moapa Valley with a trip to the regional championship on Friday on the line.

The 3A southern regional championship game will be held at Virgin Valley High School at 4 p.m. Friday, May 13. Both teams participating in the game, whether they win or lose, will receive a spot in the state championship tournament next week.

You can check the outcome of the game(s) by going to NIAA.com and clicking on the 3A southern regional bracket under the baseball section.