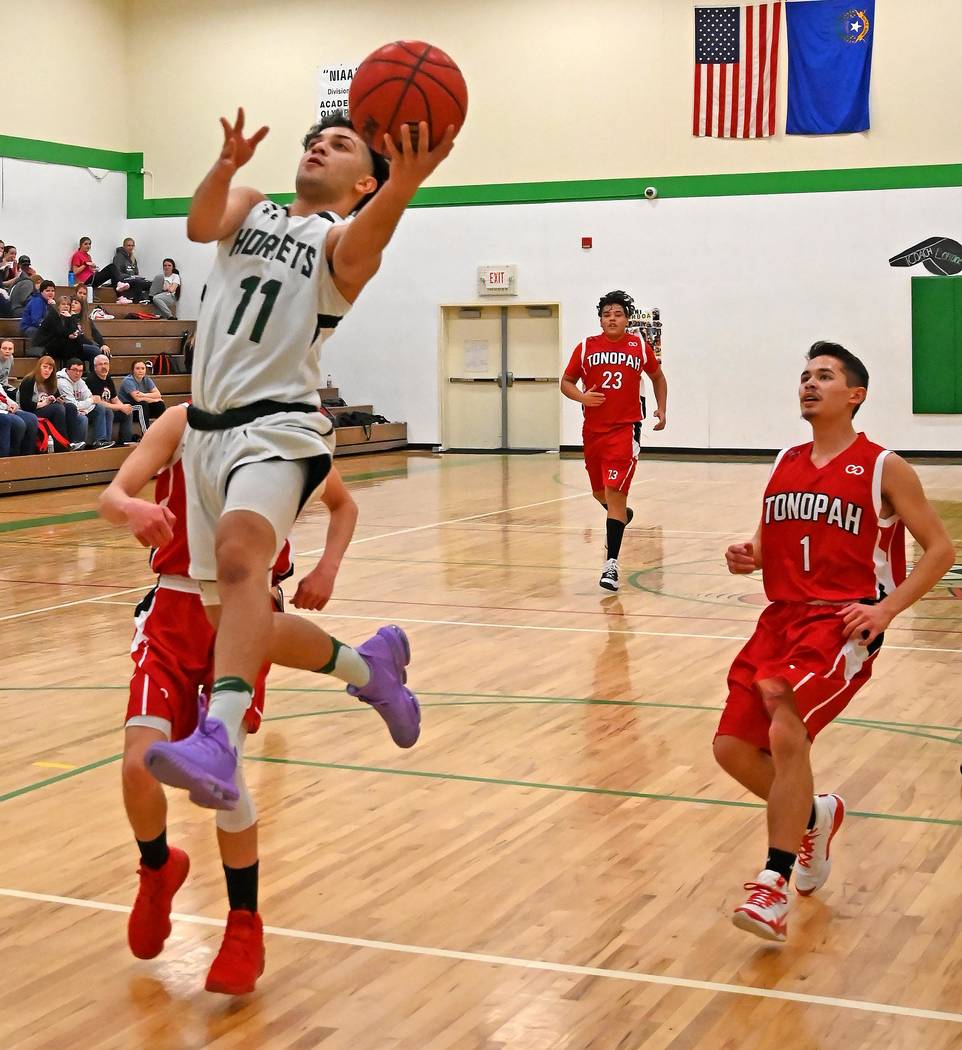 Richard Stephens/Special to the Pahrump Valley Times Beatty senior guard Fabian Perez drives toward the basket Tuesday night for 2 of his 9 points during the Hornets' 55-45 loss to Tonopah. 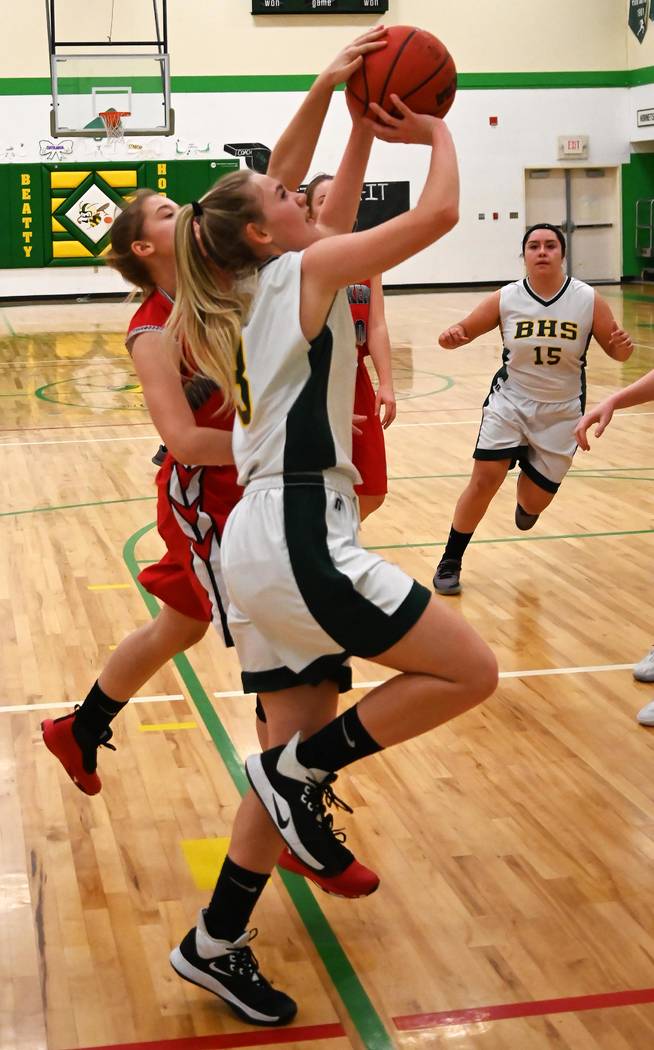 Richard Stephens/Special to the Pahrump Valley Times Beatty's Carmen Stephenson drives the baseline during Tuesday's game against Tonopah. Stephenson led the Hornets with 12 points in a 50-38 defeat. 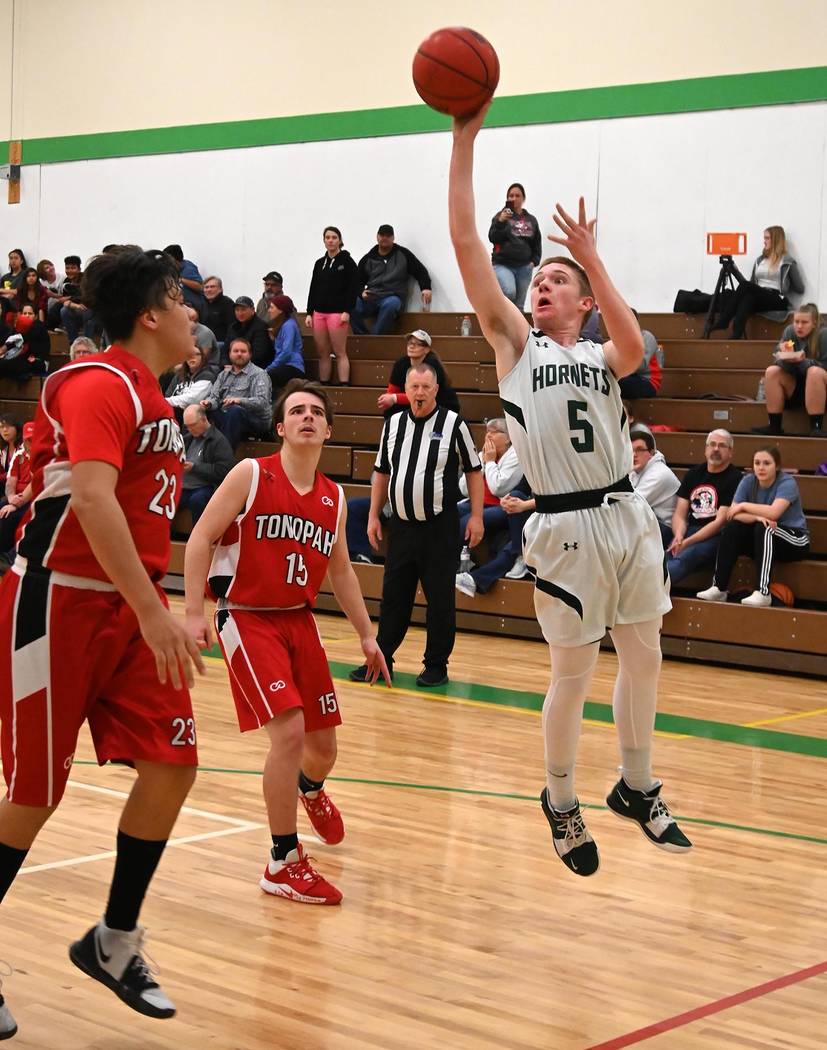 Richard Stephens/Special to the Pahrump Valley Times Brayden Lynn puts up a runner for Beatty during Tuesday night's home game against Tonopah. Lynn scored 4 points during the Hornets' 55-45 defeat. 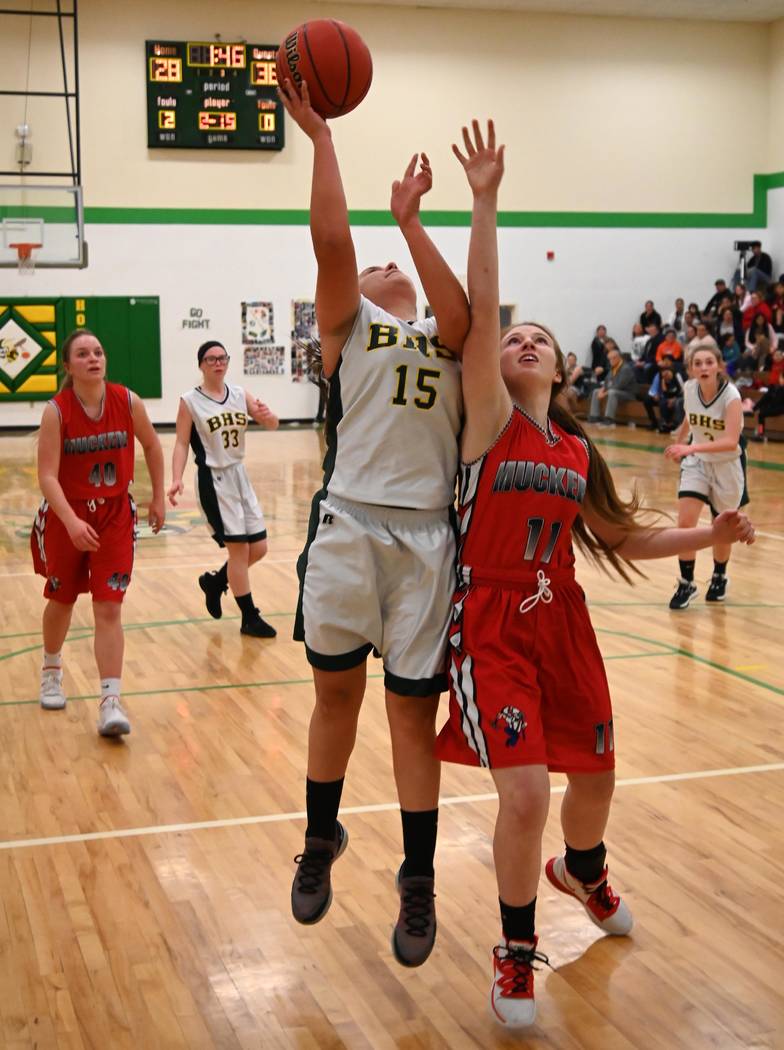 Richard Stephens/Special to the Pahrump Valley Times Beatty's Marlene Damien put up 6 points Tuesday night during the Hornets' 50-38 loss to Tonopah in Beatty.

But the score represents the Hornets’ best effort against the more experienced Muckers after suffering more convincing 48-19 and 32-16 losses earlier this winter.

“Overall we played better,” Beatty coach Travis Barron said. “We’re doing a much better job of getting the ball to our post players, and our post players played an excellent game.”

Carmen Stephenson led the Hornets with 12 points, but seven of her teammates also scored.

“Marlene Damien had a career game,” Barron said. “That’s the most points (6) she’s scored all season. Carmen Stephenson had a great game. But at the beginning of the season we weren’t getting them the ball, so we’re doing a better job of that. But we get in these ruts where my guards just want to dribble, and they overdribble.”

One thing the Hornets did not do was dig themselves an early hole.

“We started off really well on our defense,” Barron said. “We had two steals right away and had a 4-0 lead in the first minute.”

The Muckers got untracked but couldn’t shake the Hornets for a while, and when a Stephenson basket 3 minutes into the second quarter made it 16-14 it looked like anybody’s game. But Tonopah’s big guns, seniors Mandy Katzenbach and Chanlei Philips, started to assert themselves. Katzenbach had 14 points by halftime, and Philips scored 7 of her 20 points during the second quarter as the Muckers pulled away to a 30-18 halftime lead.

The teams played even the rest of the way, with the Hornets never getting closer than 8 points and the Muckers never leading by more than 14. But that wasn’t the worst outcome considering how little good practice time the Hornets had during their week off.

“Since I didn’t have a practice with a full team, it was a little hard,” Barron said. “Everybody was sick. Our first practice last week I had eight of my 15 girls. Then we had seven girls at the next practice, then we had like 10. Yesterday was our first full practice as a team in over a week.

“I had some girls who were out sick all week.”

Beatty (6-4, 3-0 1A Southern League) gets back into league play beginning at 6 p.m. tonight against Pahranagat Valley at home. Home games against Beaver Dam on Feb. 7 and Green Valley Christian on Feb. 14 will complete the regular season.

The Tonopah boys basketball team limped into Beatty on Tuesday on a 7-game losing streak, but with Joel Jones back in the lineup and Jesus Martinez launching 3-point bombs, the Muckers handed the Hornets a 55-45 defeat.

It was obvious from the start that the Hornets, who had defeated the Muckers 51-34 and 60-48 earlier this season, weren’t themselves. Beatty’s run-and-gun style didn’t produce much in the way of offense during the first half, and the Hornets trailed 22-18 at halftime.

It didn’t help that Martinez was on fire for the Muckers. The senior, who scored 8 points during the teams’ first meeting and 3 during the second, erupted for 22 points on Tuesday, connecting on six 3-point shots.

“The last time we played them with the same 3-2 (defense), and we shut him out,” Mendoza said. “Our rotations were slow. It’s not like we don’t run that 3-2 all the time. The 3-2 is designed to stop shooting on the outside. So then we switched to a man, and we had better luck there, but our help wasn’t there in the man.”

The Hornets came out strong after halftime, as Jorge Leon, Brayden Lynn and Ethan Mendoza contributed to a 6-0 run that gave the Hornets the lead at 24-22, their first lead since it was 9-8 early in the second quarter.

“We just came out, and we were running the run-and-gun a lot better,” Miguel Mendoza said. “That’s our bread and butter, that’s how we score. That’s what we came out with in the third quarter, but we should have come out in the first, second and fourth that way.”

Fabian Perez and Alfonso Sandoval led Beatty with 9 points apiece. Perez was plagued by foul trouble, picking up his fourth foul 1:19 before halftime, while Soriano kept the Hornets in the game during the first half by scoring all of his points during the second quarter.

The Hornets (6-7, 3-1 Class 1A Southern League) will play four consecutive league games at home to wrap up the season, taking on Pahranagat Valley at 7:30 p.m. tonight, Beaver Dam on Feb. 7, Spring Mountain on Feb. 11 and Green Valley Christian on Feb. 14.