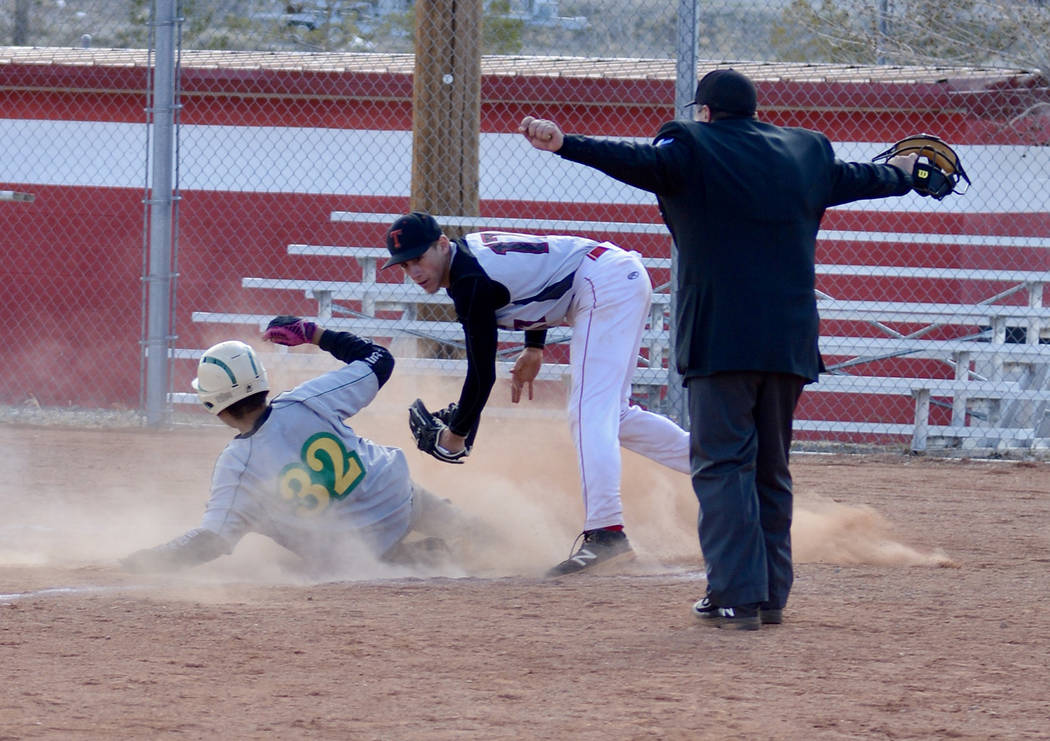 Jo Eason/Special to the Pahrump Valley Times Beatty's Austin McKenzie slides safely into home under the tag of Tonopah's Vance Day during Tuesday's doubleheader in Tonopah. The Muckers won both games by scores of 13-8 and 21-7.

Jo Eason/Special to the Pahrump Valley Times Tonopah's Brayden Tisue tags out a Beatty baserunner during Tuesday's doubleheader in Tonopah. Tisue stole 10 bases as the Muckers swept the Hornets, 13-8 and 21-7.

The Beatty and Tonopah high school baseball teams both compete in the Class 1A Central League, but Tuesday’s doubleheader in Tonopah was not part of the league schedule.

And that’s just fine with the Hornets, who dropped both games of the doubleheader.

In the opener, Austin McKenzie went 3-for-3 with a double, a home run and 3 RBIs, but it wasn’t enough as the Muckers rebounded from surrendering a 7-3 lead and posted a 13-8 victory.

Jacob Henry, Brayden Lynn and Moises Gonzalez each had 2 hits for the Hornets, while Henry matched McKenzie with 3 RBIs. Henry, McKenzie and Fabian Perez each scored twice.

The Hornets had their hands full with Kobe Bunker, who went 3-for-3 with 3 triples, driving in 4 runs and scoring 3. Bunker was the only player with more than 1 RBI for the Muckers, who were outhit 13-11.

But Tonopah pitchers had better control, walking 4 to Beatty’s 6, and struck out more batters, 10-7. And the Muckers were much more effective on the basepaths, stealing 17 bases to 3 for the Hornets. Brayden Tisue stole 5 bases for Tonopah, while Braxton Barker stole 4 and Derek Eason stole 3.

Beatty’s defense made only 2 errors, but they were important, as 4 of the 7 runs allowed by Perez in 4 innings of relief were unearned.

The second game saw Beatty jump out to a 6-1 lead midway through the second inning, but Tonopah erupted for 9 runs in the bottom of the second, 4 in the third and 7 more in the fourth to put away the Hornets 21-7 in five innings.

Again, Bunker was Beatty’s nemesis, this time on the mound as well as at the plate. The senior pitched 3 hitless innings in relief, striking out 6 and walking 2. Meanwhile, he tripled twice, driving in 5 runs and scoring 3. Vance Day, who struggled as the starting pitcher for Tonopah, drove in 4 runs with 2 triples and scored twice.

McKenzie again was the top offensive player for the Hornets, going 2-for-3 with 2 RBIs and scoring a run. Perez and Ryan Poynter had the other hits for Beatty, while McKenzie and Perez each stole 2 bases.

That last statistic was a big advantage for the Muckers, who stole 24 bases without getting caught. Tisue again had 5 steals, while Anthony Gromis had 4 stolen bases. Braxton Barker added 3, while four other players had 2 apiece.

The Muckers, who have won four consecutive games, will bring a 9-5 record into today’s home game against Eureka, while the Hornets (5-7) are off until an April 25 game against Democracy Prep in Las Vegas.

Beatty and Tonopah will play twice more this season, with a doubleheader scheduled for April 29 in Beatty. Those games, which will count in the Central League standings, were rescheduled because of poor weather March 22.