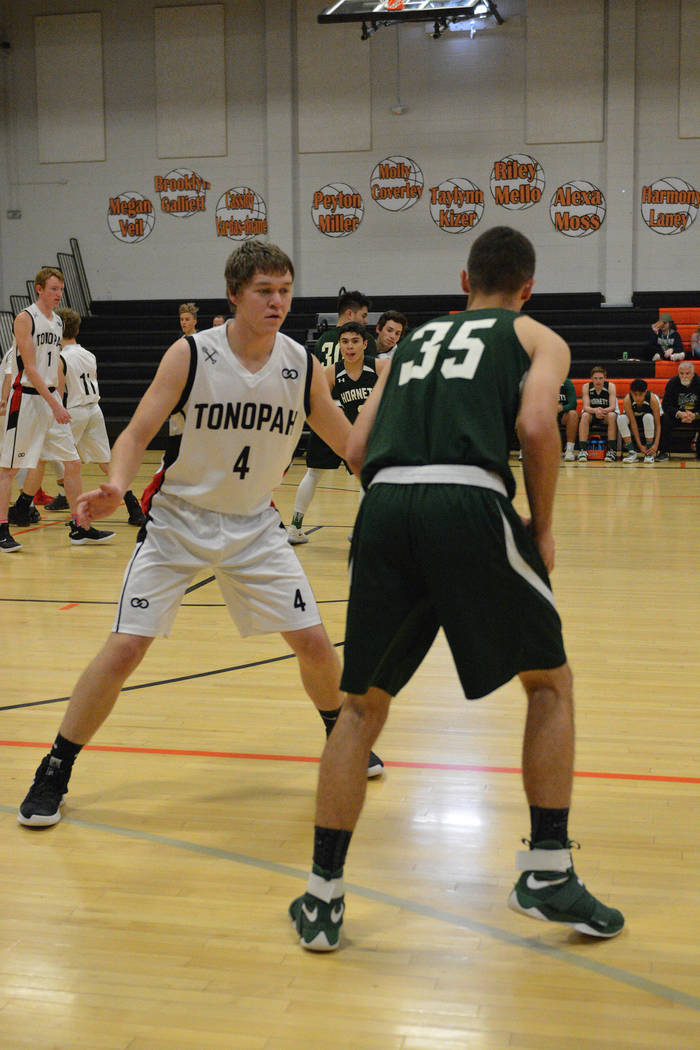 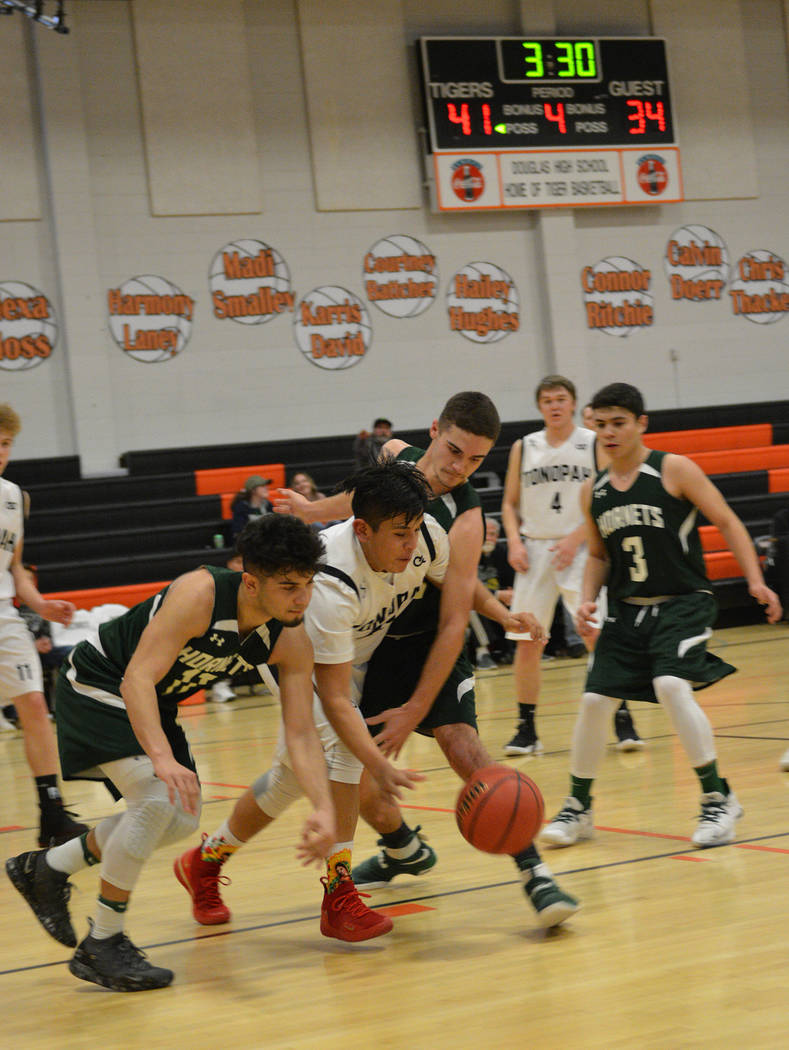 Jo Eason/Special to the Pahrump Valley Times Tonopah and Beatty players battle for possession during the fourth quarter of the Muckers' 47-42 win over the Hornets in the regional tournament Feb. 22 in Minden.

For the third time this season, the Beatty High School boys basketball team was matched up with Tonopah, this time in the opening round of the Class 1A Central/South Region Tournament.

And for the third time this season, the Hornets came up short.

Despite 17 points from senior guard Alan Sandoval, Beatty dropped a 47-42 decision to Tonopah on Feb. 22 at Douglas High School in Minden.

Beatty coach Steve Sullivan hoped that the way the Hornets played their way into the playoffs — with a solid victory over Sandy Valley the previous Friday night — would carry over into the tournament.

“The game was disappointing in terms of how we played,” Sullivan said. “I thought after the Sandy Valley game we had set a pretty high bar in terms of energy and execution of the little things that make a big difference. If we had played to the level I know we can play, then the loss wouldn’t be so bad or have as much of a sting like this one does.”

The Muckers outscored the Hornets 15-6 during the second quarter to take a 28-20 lead at halftime, but the Hornets came right back during the third quarter and trailed just 32-30 entering the fourth.

“The game was relatively close the whole way through, but we never tied or took a lead after the third quarter,” Sullivan said. “We began to press them in the latter half and were executing very nicely. We forced them to throw passes out of bounds or we jumped their passing lanes and stole the ball, but we couldn’t transition that into offense.

“There have been several times where our defense has motored our offense but we couldn’t do it that night and we left a lot of points up on the board for being unable to finish at the basket.”

As a result, Tonopah was able to pull away just enough to advance to the regional semifinals the next day against Spring Mountain.

Senior forward Jacob Henry totaled 11 points and 9 rebounds for the Hornets, while Sandoval had 4 steals and was a 6 for 6 from the free-throw line. But the Hornets, who went 6-2 to finish in a three-way tie in the Southern League after going 3-6 in league play last season, had visions of going at least a little bit further.

“After the game, I told the boys that in life things don’t always go as you plan,” Sullivan said. “I know it was a disappointing end, but there were a lot of positives to a good season.

“We went from not being in the playoffs last year to being third this year. We beat Spring Mountain, which we haven’t done since 2011, and a lot of great memories in between.”

In addition to Sandoval and Henry, the team’s top two scorers, Geo Maldonado and Jose Moreno also will graduate from this year’s team.