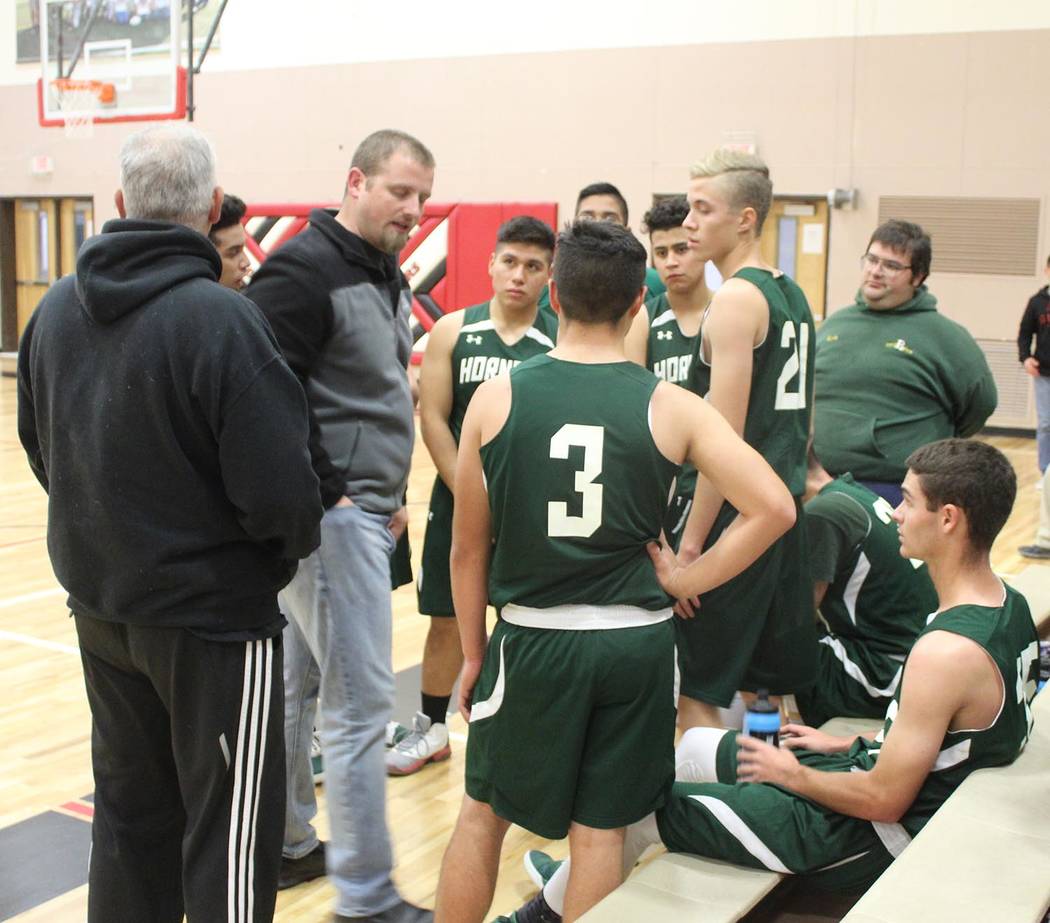 Tom Rysinski/Pahrump Valley Times Beatty coach Steve Sullivan talks to his team during a timeout Tuesday night in Tonopah. Despite 26 points from Alan Sandoval (3), the Muckers defeated the Hornets 57-54. 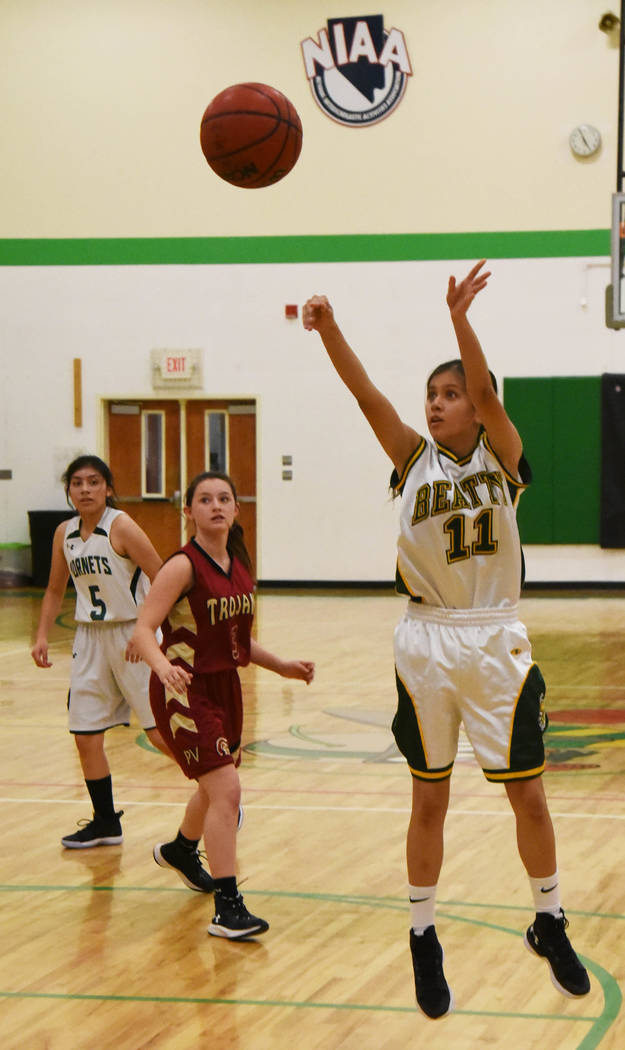 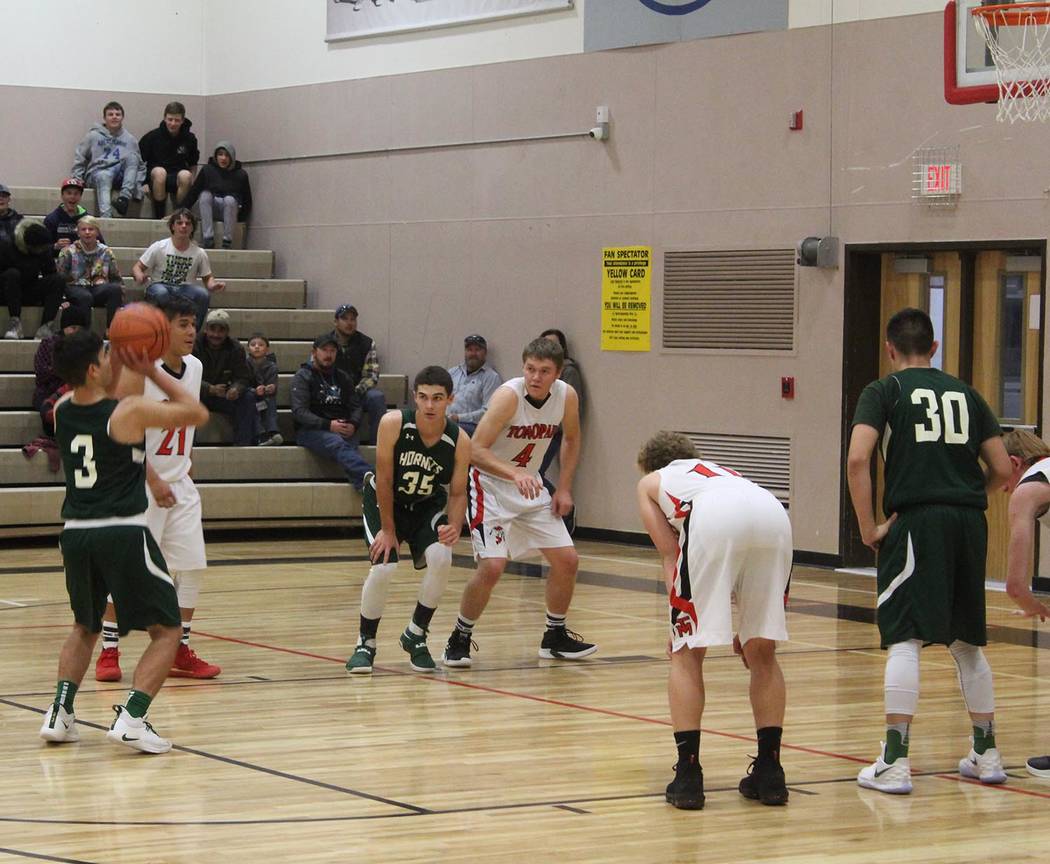 Tom Rysinski/Pahrump Valley Times Senior guard Alan Sandoval shoots a free throw during the second half of the Hornets' 57-54 season-opening loss to Tonopah on Tuesday night in Tonopah.

It might have been opening night for Beatty High School’s basketball teams, but Alan Sandoval was in midseason form.

Sandoval poured in 26 points, but the Hornets lost a tight contest to old rival Tonopah 57-54 on Tuesday night in Tonopah. Beatty’s girls were on the short end of a 45-19 score in the opener.

“It was a very good game,” Beatty coach Steve Sullivan said. “I was very proud of how we came out. I think it does say something that this was Tonopah’s sixth game and it was at their home court, and you saw the way we competed with them.”

Early on, it looked as if the difference was going to be Tonopah’s Lee Ketten. The 6-foot-6 senior center blocked three shots within the first three minutes of the game on one end of the floor and scored nine of the Muckers’ 11 first-quarter points on the other end.

But Tonopah showed some impatience on offense and went away from feeding Ketten down low. Meanwhile, Sandoval showed an ability to drive the lane, ignoring the height differential.

“Alan Sandoval was very impressive driving the ball, getting his shots off against their big guys,” Sullivan said. “You’re looking at a guy who’s 5-8, 5-9, and he’s going up against these 6-footers, especially that 6-7 kid down low.”

Alex Katzenbach and Max Swanson of Tonopah each had 5 inches on Sandoval, but the senior continued to take the ball to the hoop, not just getting layups but also getting to the free-throw line, where he was 7 of 9. He also hit his only 3-point shot of the night.

The Hornets trailed 45-44 entering the fourth quarter, twice fell behind by six and twice pulled back within two. The tightness of the game brought the fans into it, and supporters of both teams exchanged a very vocal battle in the bleachers.

“They’re no longer in our league, but Tonopah and Beatty have a deep history, and it shows in whatever we compete in,” Sullivan said.

The Hornets were 7 of 11 from the line for the game, but three players missed the front end of a one-and-one during the fourth quarter — two during the final 1:52 — and two desperation shots in the closing seconds were off the mark.

Senior Jacob Henry scored 10 points for the Hornets, who shot 38 percent from the floor and hit just 1 of 5 shots from downtown. Both teams played at a frenetic pace that several times resulted in back-to-back turnovers.

“Even though we had some mistakes and some kinks we’ve got to work out, overall I was proud of the boys tonight,” Sullivan said. “It was an enjoyable game. Even though we lost, I enjoyed it.”

The girls game was a very different story. Tonopah’s more experienced group never gave the young Hornets a chance, jumping out to an 11-3 lead after one quarter and holding a 21-7 halftime edge behind 8 points from Mandy Katzenbach and 6 points from Lauren Klapper.

“We’re very young,” Beatty girls coach Aimee Senior said. “We’ve got one returning junior and one returning senior, and for some sophomores, this is their first year playing. So we’ve got a really young team.”

A bright spot for the Hornets was freshman Anna Torres. Her fearless, aggressive brand of basketball led her to drive to the basket both in the lane and along the baseline, and she accounted for 9 of Beatty’s 19 points.

Senior, who has been in Beatty for 30 years and has coached varsity basketball for 18 seasons, has 13 players in her program, although one is injured, one is ineligible and one has not yet had enough practice time to play in games.

“We’ve got a lot of work we need to do yet,” Senior said. “You just keep encouraging them, keep telling them that they work hard and eventually they will be where these girls are, the girls they just played.”

The Hornets boys and girls will compete next weekend in the Knights Classic at Round Mountain, with the girls also having a home game Tuesday against Big Pine.