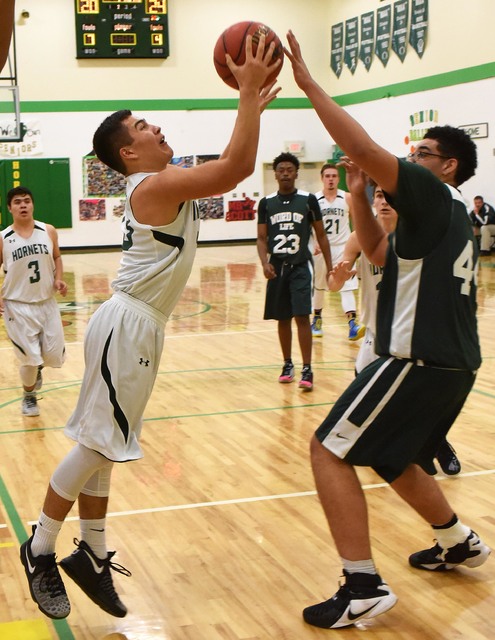 Jacob Oseguera posted the best game of his career as a Hornet, scoring 35 points and 10 rebounds in the Wednesday night playoff game against Word of Life. Richard Stephens / Pahrump Valley Times 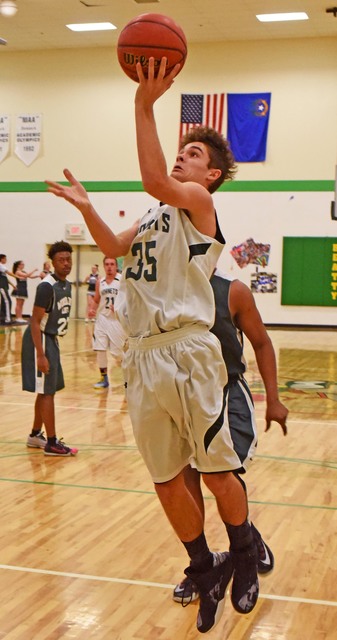 Jacob Henry goes for the layup against Word of Life on Wednesday night in Beatty. Henry scored 12 points in this game. Richard Stephens / Pahrump Valley Times

Jacob Oseguera scored 35 points and grabbed 10 rebounds to lead the Hornets past Word of Life, 57-51, on Wednesday in Beatty.

“During halftime, we really didn’t make too many adjustments on offense,” Hornets coach Steve Sullivan said. “ I felt our shot selection was excellent, we just couldn’t get them to go in. So we decided to just keep doing what we were doing and we came out firing.”

Sullivan said Osegueara has been their lead scorer most of the season but this was a career high for him.

Beatty had a 17-point lead going into the fourth quarter, but shot themselves in the foot while trying to take time off the clock.

“I told the boys we can take our time offensively and burn some clock,” Sullivan said. “Unfortunately, that caused us to lose our momentum both offensively and defensively. We weren’t contesting shots and were losing the battle for rebounds.”

This allowed the Eagles back into the game.

“Word of Life cut our lead and their team remained strong and kept their cool,” the coach said.

Oseguera said that the Eagles caught them briefly in the fourth quarter to take the lead.

“We just lost our focus,” he said. “The coach called a timeout and we tried to get back into the groove, but couldn’t.”

Oseguera then hit two baskets in a row to save the game, one being a 3-pointer to give the Hornets a 4-point lead. That and some free throws was all it took.

Beatty now advances to the semifinals to play Pahranagat Valley, a perennial favorite in the playoffs. The Panthers beat the Hornets this year 51-26 on Jan. 24. But despite the mismatches, Sullivan feels his team can beat them.

“We have to continue working on our offense and try to match them on the scoreboard,” he said. “It’s tough to compete with a team that can just throw the ball over you but we will work on some defensive strategies to challenge and frustrate their big guy. If we can keep improving our offense like we have been and win enough defensive battles, we will be able to compete and beat their size.”

Beatty plays the Panthers at Sunrise Mountain on Friday at 4:40 p.m.