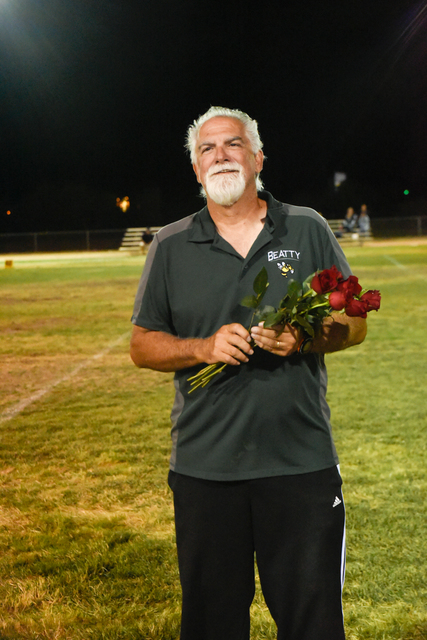 Coach Leo Verzilli is honored by the school during halftime this year at homecoming. He was recently named the Nevada 1A Southern Conference Coach of the Year. Skylar Stephens / Special to the Pahrump Valley Times 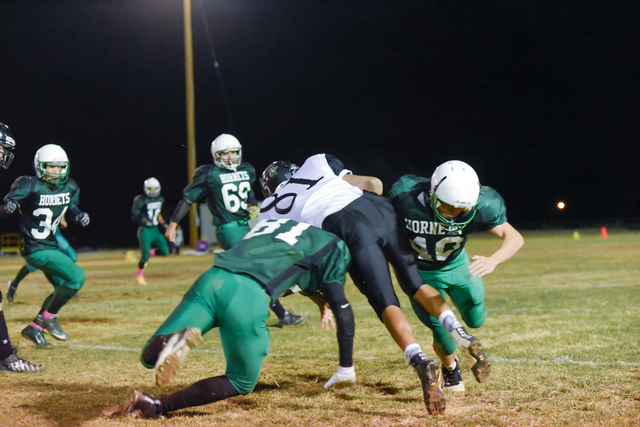 Beatty players Jake Ybarra and Michael Olson make a tackle. Coach Lee Verzilli came on when the current seniors were freshmen and turned the team into football players. Skylar Stephens / Special to the Pahrump Valley Times

The Beatty Hornets football team went to the playoffs again this year where they finished as the third-seeded team in the regional playoffs. For their efforts as a team, the Nevada 1A Southern Conference coaches voted Leo Verzilli Coach of the Year.

“Leo (Verzilli) won because of the turnaround the program has had since he’s been there,” Stringer said. “Not just football, but all of the sports in general.”

Stringer said he has known Verzilli since he was a little kid.

“I was friends with his son Chris in elementary,” he said. “And he owned the best burger shop in town, ‘Archie’s, so naturally I ate there a lot.”

Stringer said Leo reminded him a lot of an old-school coach.

“The kind of coach we would have had in school,” Stringer said. “He’s a great guy, and he’s doing great things for the kids in Beatty.”

Some of his senior football players agreed with Stringer.

“He is one of those coaches that forms a bond with his players,” lineman Robby Revert said. “He goes out of his way to establishing a bond with each player and we all feel we can trust him. He’s like a father figure or an uncle.”

Running back Michael Olson said the award was well deserved.

“He believes in everybody,” Olson said. “And he has good knowledge of the game.”

“He is a great coach and good mentor and really knows the game of football,” Mendoza said. “Oh, and he loves doing it.”