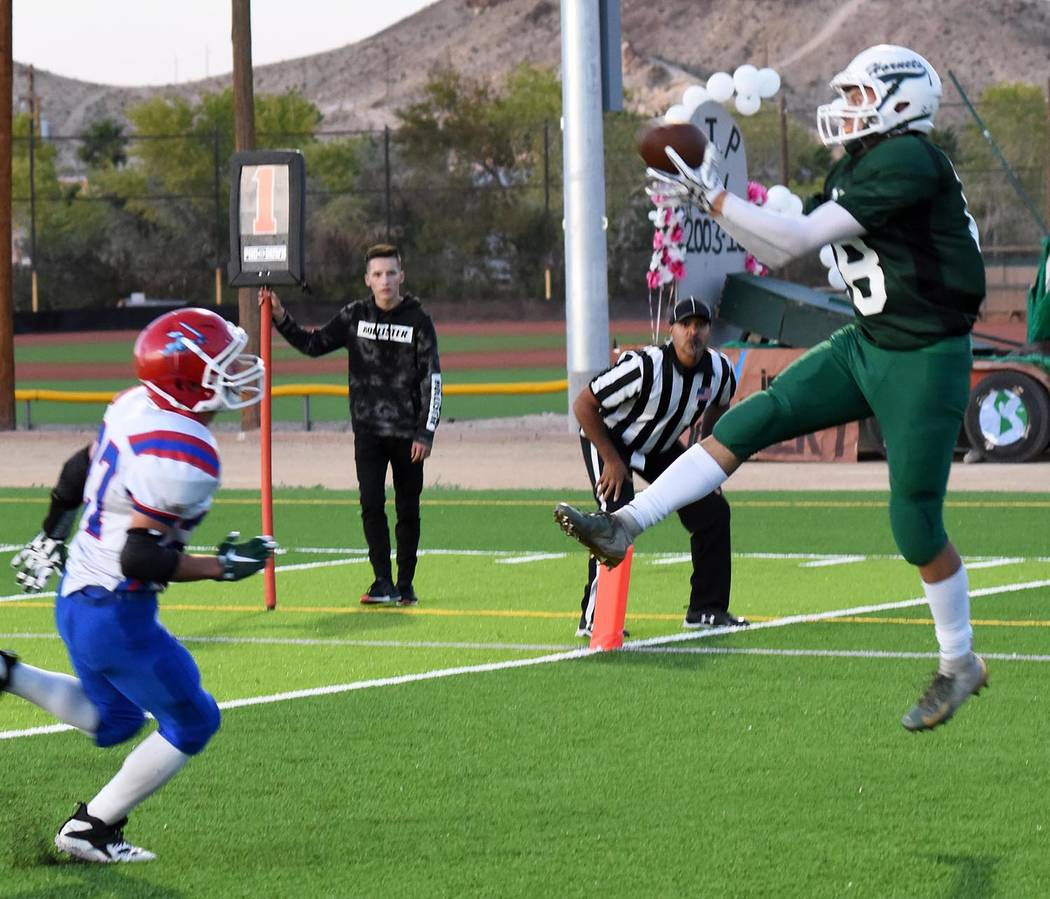 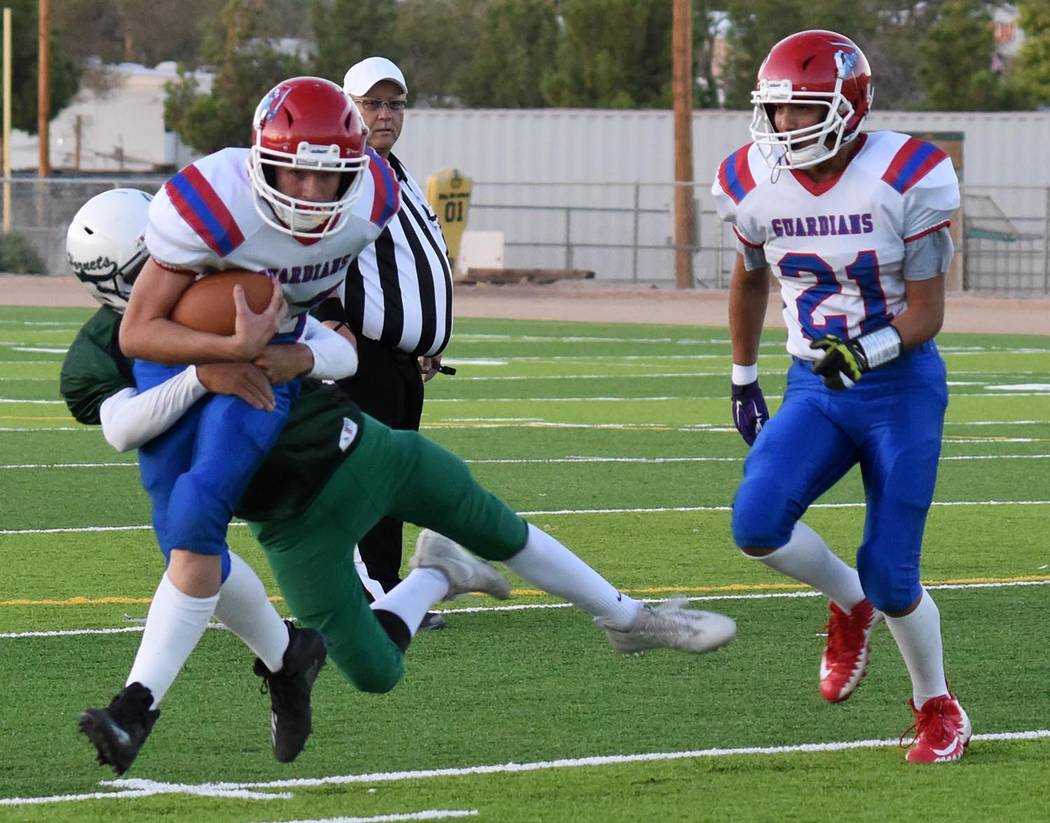 Richard Stephens/Special to the Pahrump Valley Times Beatty's Jacob Henry makes a tackle against Green Valley Christian. Henry ran for two touchdowns and passed for another last Friday as the Hornets rolled to a 46-6 win over Beaver Dam. 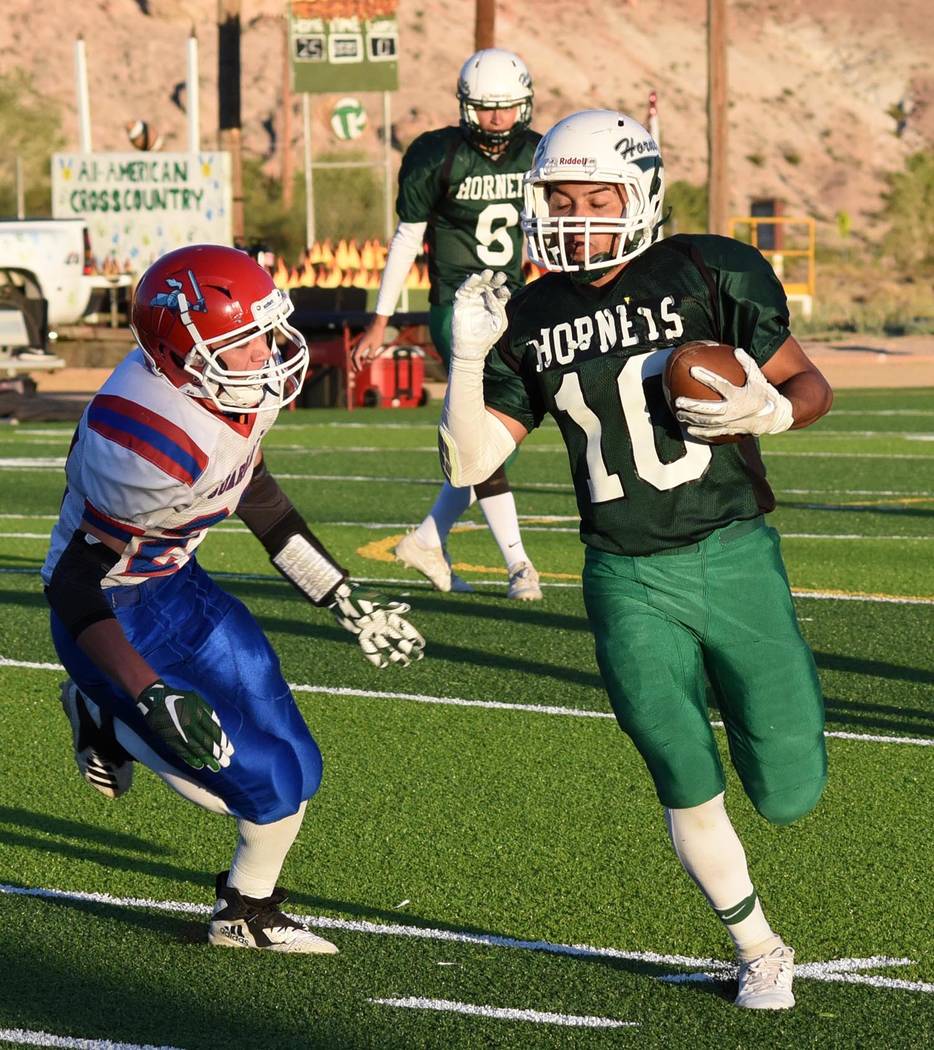 Tonopah and Beatty are no longer in the same league, but that has not stopped the Hornets from thinking about the Muckers.

With Tonopah undefeated and tied for first in the Class 1A Central League, the teams could meet in the first round of the playoffs should the Hornets finish second in Class 1A South.

“They want to play Tonopah in the playoffs,” Beatty coach Leo Verzilli said. “That’s been some extra motivation. We’ve got to get through these guys first, but that’s the hope.”

“These guys” play for Spring Mountain, part of the Spring Mountain Youth Camp in the Clark County Juvenile Justice System. Despite having total turnover in enrollment each year — the average student spends six months at the school — and only 100 students, the Eagles have fielded some very good teams over the years.

It was Spring Mountain that snapped the nation’s longest eight-man football winning streak when the Eagles topped Pahranagat Valley 68-46 in the Class 1A state championship in 2016. The Panthers have not lost since that 104-game run ended, meaning the Eagles are the only team to defeat them in their past 122 games.

Since an opening 48-40 loss to Bloomington Christian of California, the Eagles have won four straight, scoring 282 points in four shutouts. Not that the Hornets are intimidated, said Verzilli.

“We are really hopeful and psyched,” he said. “We came close last year (a 30-25 loss). We reviewed film, and we made so many mistakes and lost by five. We could have played so much better.

“Our kids are all back, they’re all wiser, and they all understand the concept more. So we’re looking for a successful outing this week.”

Beatty (4-1, 2-1 1A South) tuned up for its showdown with Spring Mountain (4-1, 2-0) by rolling to a 46-6 win over Beaver Dam. Jacob Henry and Fabian Perez each rushed for two touchdowns, Alan Sandoval scored once, and Henry threw to Geo Maldonado for another score. The one touchdown allowed was on a kickoff return, and kick coverage has been a problem for the Hornets.

“Our running game was really working,” Verzilli said. “We could get around their ends, and our line, again, did a great job at the line of scrimmage.”

Of course, the Eagles are a very different opponent.

“Right now we’ve been breaking down film for about three days,” Verzilli said. “There are a few tweaks we will make to play them specifically offensively and defensively.

“We’re looking forward to it. They don’t outweigh us by 50 pounds a man this year, and we got some film on them from earlier this year. They’re a smaller team, but they do have speed. Defensively, we’re going to make a few moves, and offensively we put in maybe six plays.”

But Spring Mountain does have one advantage. It’s the one school around that you cannot possibly refer to as being in “the valley.”

The Hornets and Eagles will meet at 3 p.m. today.