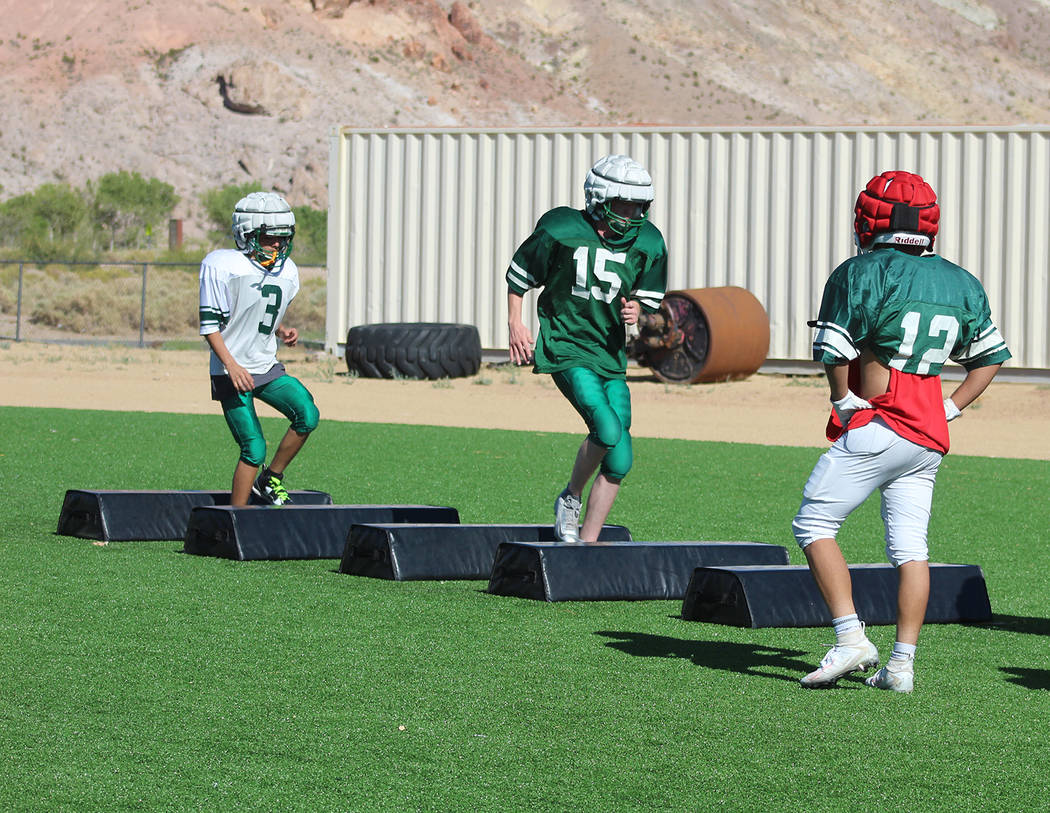 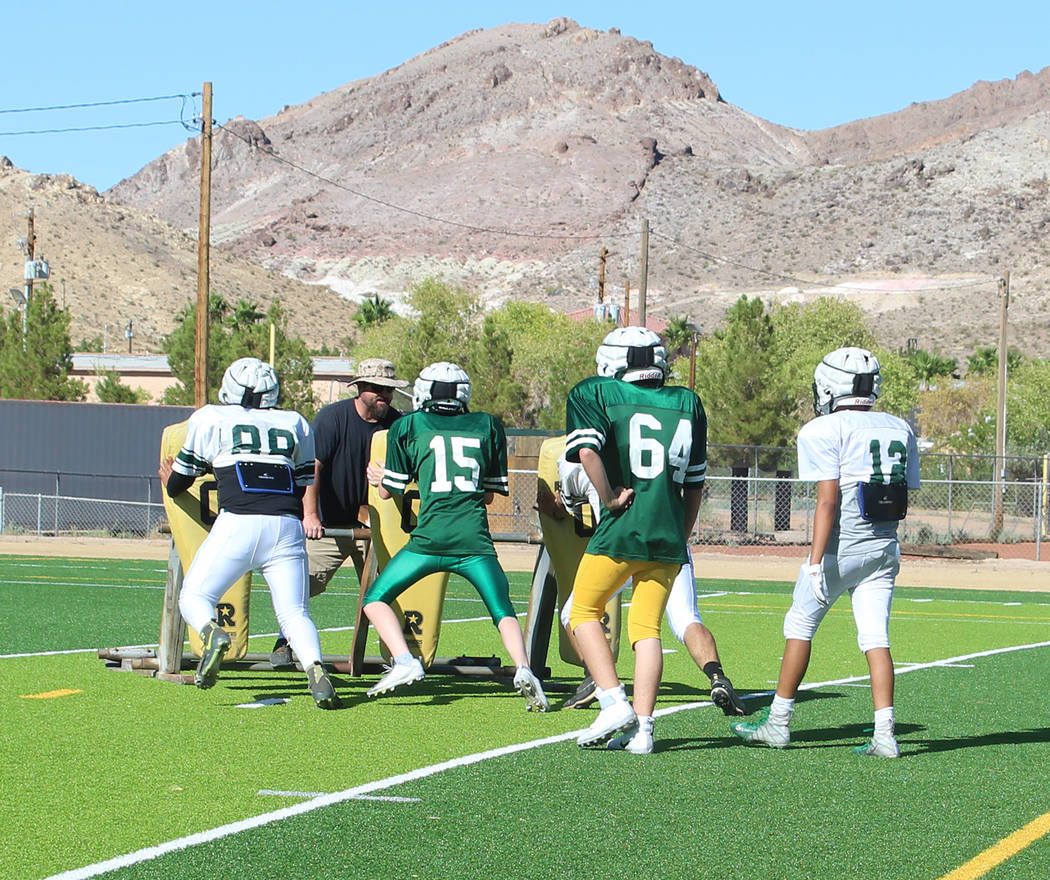 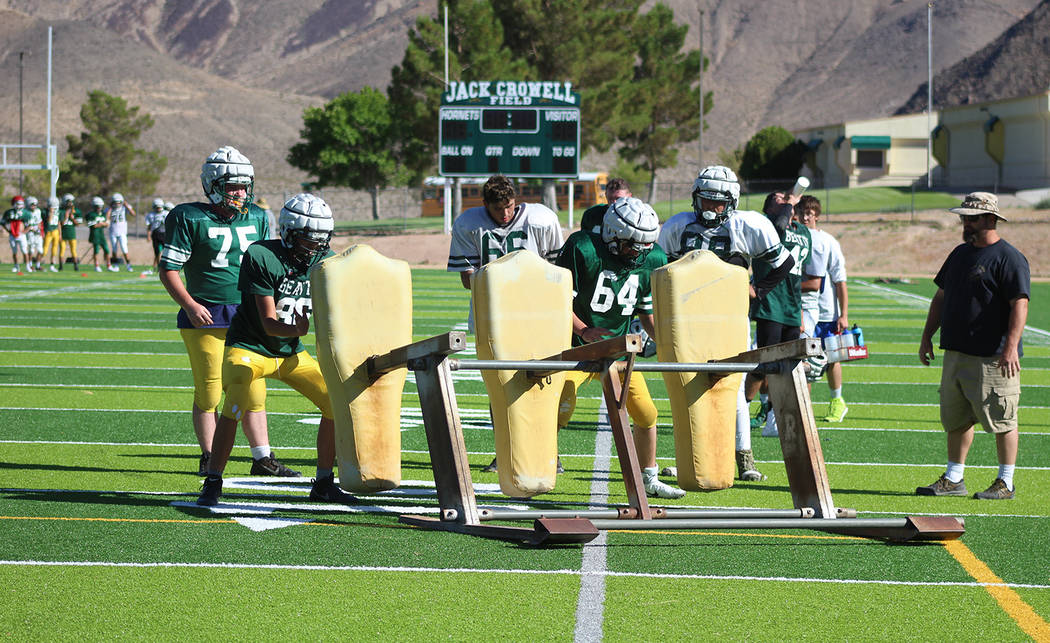 Tom Rysinski/Pahrump Valley Times Linemen work out on one end of the football field while backs run drills on the other during an Aug. 14 practice at Beatty High School. 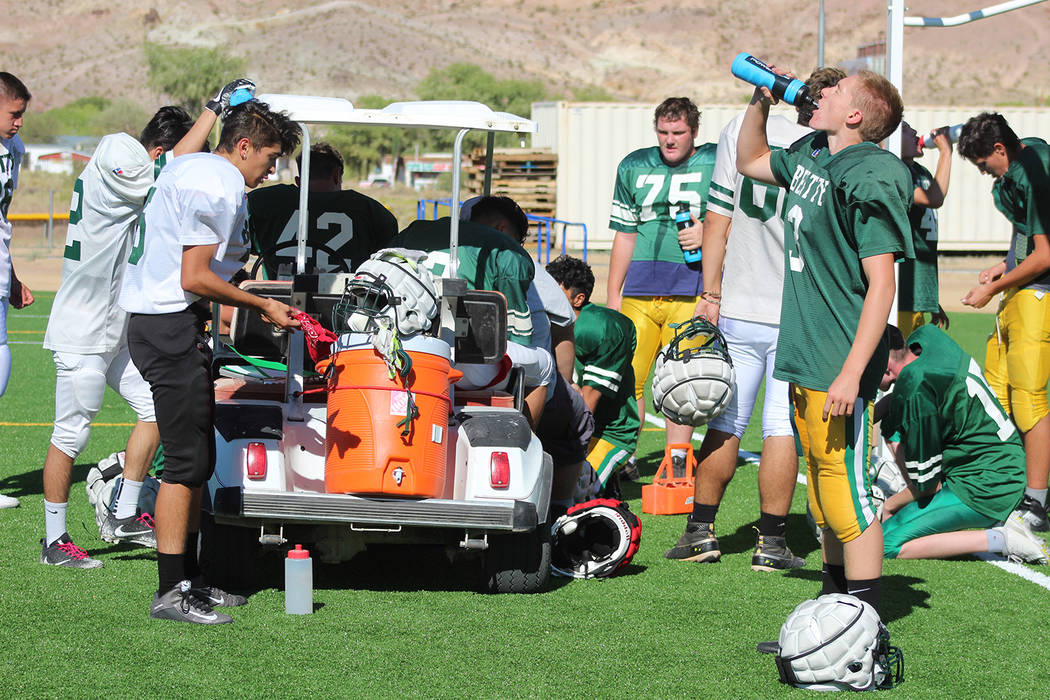 According to last year’s roster, there were nine seniors on the Beatty High School football team during the 2018 season, a bit more than one-third of the roster.

But their impact was far greater than that.

Led by Jacob Henry and Max Taylor, the senior class was a very talented group that paced the Hornets to a 6-2 record, losing only to Class 1A state champion Spring Mountain and perennial powerhouse Pahranagat Valley. The class had big linemen, talented receivers and speedy backs.

“Those kids were seniors for two years, because when they were juniors we had no seniors,” Beatty coach Leo Verzilli said at practice last week. “I can’t talk enough about those guys, but these kids who played with them, they understand it, they know what we’re all about.

“Luckily we have five seniors that have played before, so they’re experienced enough to build around. Are they going to fill those shoes? Absolutely not. But are they good athletes that know what they’re doing and understand the program? Yes.”

“We have lots of speed but no big people,” Lopez, who stands about 6-foot and weighs 240 pounds, said without irony. But Lopez is right, there aren’t many like him on the practice field.

“We have less size,” Verzilli said. “We probably won’t be able to pound it the way we did, but we have the same speed or more than last year.”

Verzilli pointed to Fabian Perez, Efrain Villanueva and Noel Gutierrez, the reigning Class 1A state champion in the 300-meter hurdles, as examples of the speed the Hornets will put on the field. Perez and Villanueva are four-year players, while Gutierrez is new to the gridiron.

“We’ve got a lot of young kids who are fast, but they don’t know how to play that much football yet,” said Perez, a senior running back and linebacker.

Junior Brayden Lynn has the inside track on the quarterback job and isn’t too concerned about the lack of size up front.

“Last year’s line was amazing, but I think this year’s line is going to improve and do some great things,” said Lynn, who understands the importance of senior leadership.

“Those seniors really taught me how to grow up and how to take it out on the field,” he said of last year’s group. And this year? “Fabian Perez. He’s a senior this year, and I believe he’s really going to step up and lead this team.”

The quarterback shares that responsibility, and while Verzilli said Lynn has the inside track on the job, he does have a promising freshman in Francisco Granados.

“He’s a big, tall — over 6-foot — freshman,” Verzilli said. “We’ll look at him at quarterback, and if not, definitely as an offensive and defensive end.”

That size and youth are two of the things the coach said the program needs more of moving forward.

“We need to get some bigger numbers in our freshman, sophomore and junior classes for next year,” said Verzilli, who said he could have close to 20 players on the roster this year.

Since last year’s realignment, the Southern League is basically Spring Mountain, Pahranagat Valley and everybody else. Beatty was by far the best of everybody else last season, and, despite the graduation losses, the Hornets figure to be in the same vicinity again.

“I think in our league we’ll be able to hold our own except for the two powers,” Verzilli said. “Those are always going to be a challenge. But I think everybody else that we’ll see, we’ll be equal or be better.”

“I think we’re going to do pretty good, but not as good as last year,” Lopez echoed a few minutes later.

The seniors apparently did not talk to Lynn about that.

“I think most of the team is pretty optimistic that we can match what we did last year,” the junior said. “I think some people need that extra encouragement to feel that optimism.”

Lynn was the only one of the three who had a specific game circled on the calendar.

“Mineral County,” he said. “We had a really, really close game last year. It was back and forth, intense. Our offense was scoring a lot and our defense didn’t do much, so I’m looking forward to this year and hopefully, our defense can stop them.”

The Hornets won that game 66-64 last year in Hawthorne, and the Serpents will make the return trip to Beatty on Sept. 20.

Lopez saw no reason to look ahead.

“We’re going to play Round Mountain first,” he said of the Sept. 6 opener. “We’ll see how we do there.”