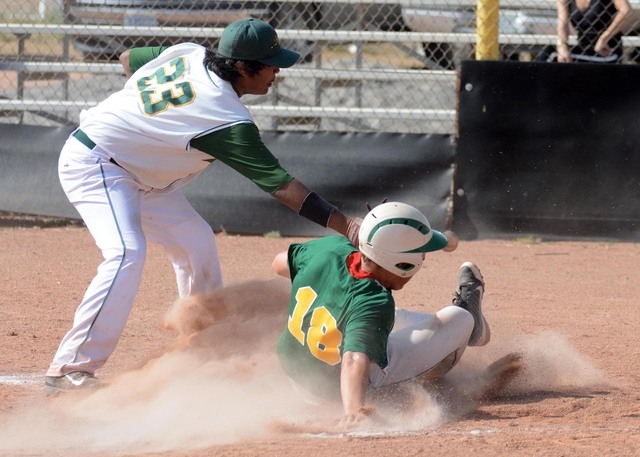 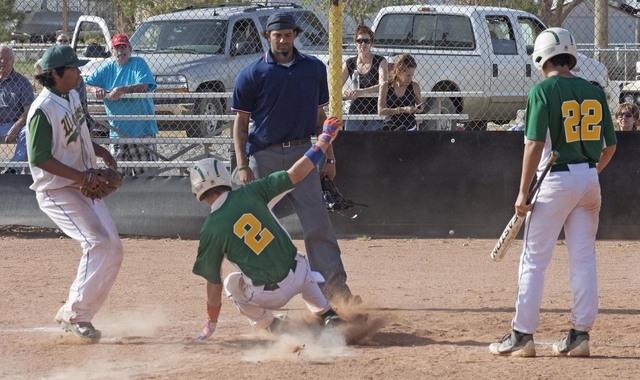 When the high school only has 100 kids in the entire school, it’s hard to put together an experienced team. Hornets Coach Leo Verzilli really only has two players from last year’s roster and it shows, but Verzilli is not worried. He always stresses the fact that the kids want to play and that they are getting better each game.

The stats show that on defense the Hornets are getting better. In the field, the Hornets are averaging 3.2 errors a game and this is a big improvement over some games where there were as many as six errors in a game.

The Hornets found an offense against Big Pine High School out of California on Tuesday and won game 1: 8-4 and game 2: 13-3.

“We won both games and the kids played pretty well and we had the whole team there. The two things that were better during this game were pitching and errors. We made fewer mistakes. We also had more kids hitting. That is the one thing we need to do is have the bottom of the lineup hit more. At some point in our lineup we don’t have a prayer of anyone hitting the ball,” Verzilli explained.

Leo said he has all the tools to teach hitting. The students he has playing the game don’t have the same opportunities that kids in Pahrump have. Beatty doesn’t have a little league.

“It’s something we teach all year long. We knew these kids couldn’t bat. It’s kind of stumping me. First we taught the mechanics of hitting and now what? We just hit and hit and hit. We just individually pick them apart. I guess the more you do it, the better you get,” Verzilli lamented.

Last week the team dropped two games in a row to the Indian Springs Thunderbirds, losing 11-1 and 11-2. For the Hornets, it was their fourth loss in a row. Hornets hitters were limited to 2 hits in the first game and 3 hits in the second game.

For Beatty, Jake Zamora had 2 hits in the first and second games. Nick Zamora helped him out with a hit in the first game.

The Hornets will play the Round Mountain Knights next. The Hornets are 2-5 overall.

“I hope we play well. When everybody is there we can put a decent defense on the field. Our hitting is not going to get any better in two days, but our defense is there. We will see what happens Friday. It will be a good test to see how far we have come. We will see if we have the basics of defense down. Friday is our test,” he said.

The Knights will be at Beatty and the first game starts at 1 p.m. today. The Knights are 4-6 overall and 2-2 in league.

It was an intense week for the Muckers baseball team. They added six more victories to their list of wins reaching a current record of 15-0-1 (League: 4-0-0). Their opponents were Bishop (California), Mineral County (Nevada) and Beaver Dam (Arizona).

For Muckers Coach Clark Jewett it’s all about focus.

“We just need to keep our focus and keep doing the little things, like making routine plays on defense and hitting the ball with runners in scoring position. We can’t have a letdown,” he said. “We can be competitive by having the drive and desire to win the league, then the regional tourney and then the state championship. Our goals are simple, win at all costs, and get that championship, and all the kids are on board,” he concluded.