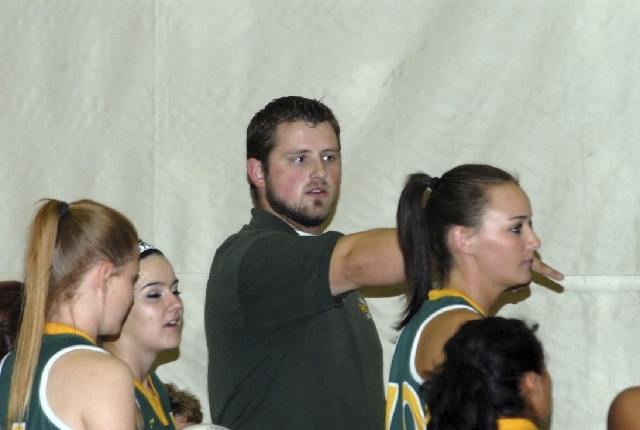 In Beatty it’s hard to find good coaches. They are either retiring or leaving.

Beatty High School spent all spring looking for a replacement girls basketball coach for Aimee Senior, who retired at the end of the season. At the end of the year, the school thought they had that position filled by last year’s Assistant Coach Steve Sullivan.

Sullivan announced during the summer his plans to take a year off.

The coach will be deeply missed. He has coached three sports for the past couple of years, girls volleyball, girls basketball and track. He would have been head coach in volleyball and basketball.

“Steve is gone for a year. Steve is not going to do anything this year. Dale Lerbakken will be the new coach for volleyball,” Verzilli said.

“It was Steve Sullivan’s decision to take a year off from coaching. He is a young teacher and would like to concentrate on his classroom teaching. He has decided to step back from his coaching and put 110 percent into his teaching,” Flood said.

Verzilli said the vacancies have had a deep and profound ripple effect from the high school on down. He spoke about bringing an unnamed basketball coach from the junior high.

Flood is also the junior high principal and athletic director. He agrees with Verzilli. In addition to basketball, the head junior high football program is in question because Head Coach Andy Ibarra retired last year.

“I don’t have a coach down there. My coach of three years has left because he got a new job. He does a great job. He’s a coach. He wants to be out there. He got this new job and he can’t coach at all this fall. I am trying to fill it and I am kind of getting a little concerned about it. We had such a great year last year under Andy and his leadership.

“I have feelers out and I am concerned that there will be no football because it is already Aug. 21. It would be nice to fill soon because the first day of practice should be Aug. 26,” Flood said.

The high school football program already is behind other Division IV teams in the area because they start late in the summer.

Team practices for BHS started this week because most of the team comes from Amargosa Valley and players have a hard time making the trip during the summer for lack of rides. Other teams have been conditioning most of the summer for fall.

Basically, all fall sports at BHS get little conditioning during the summer. Even when the sport does start a week early, students still have a problem making practices until the late bus starts rolling when school starts.

Senior Christina Thompson plays volleyball and made this comment on Wednesday.

“I have made it to just one practice this week because I could not get a ride and practices started for us on Monday.”

Verzilli said football at BHS got off to a good start regardless of the ride situation. He had 13 players on Monday and 18 on Wednesday.

The girls BHS basketball coach position could be filled if Aimee Senior comes out of her short retirement. This remains to be seen. Senior said in a brief email statement, “I don’t know at this time. We’re still trying to get things situated.”