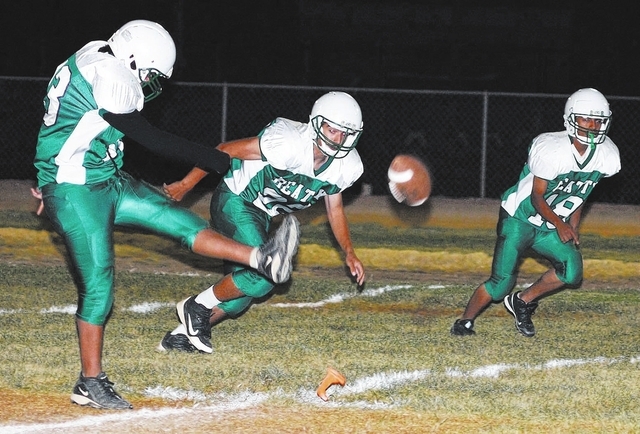 Beatty lost to Indian Springs 31-20 and may have dashed their hopes of a playoff birth. In order for Beatty to make the playoffs, the team will have to play with a lot of heart against Spring Mountain on Nov. 1.

There is also the matter of the Sandy Valley Sidewinders. Just because it is homecoming this week for Beatty does not mean the Hornets will automatically beat them. The Sandy Valley squad can put points on the board and they almost beat the division leader Tonopah Muckers. If it were not for a last minute touchdown effort by the Muckers in the final seconds of the game, the Sidewinders would have won that game.

The Sidewinders beat a California team 62-16 and they beat Beaver Dam twice, 74-28 and 48-0. So, a Beatty victory this Thursday depends on which Sidewinder team shows up. Sandy Valley remains without a league game this year at 0-4.

Beatty must win the last two to stay in the playoff race.

In the Indian Springs game, Hornets Coach Leo Verzilli feels his team could have won the game.

“We didn’t catch anything in the first half. We were open, just dropped them. We also let them off the hook a half dozen times with third and 14, third and 12,” he said.

Verzilli said his team could not stop the screen and had an interception for six points, which also contributed to the loss.

“We played well and did a lot of things right, just not enough,” he said. “They were well coached and disciplined on the outside. We ran the ball well, but couldn’t catch a pass until the 2nd half. We need to take the next step and finish drives and hold them to a punt when we have the chance. We’re young and it will come. It’s the growing pains that hurt.”