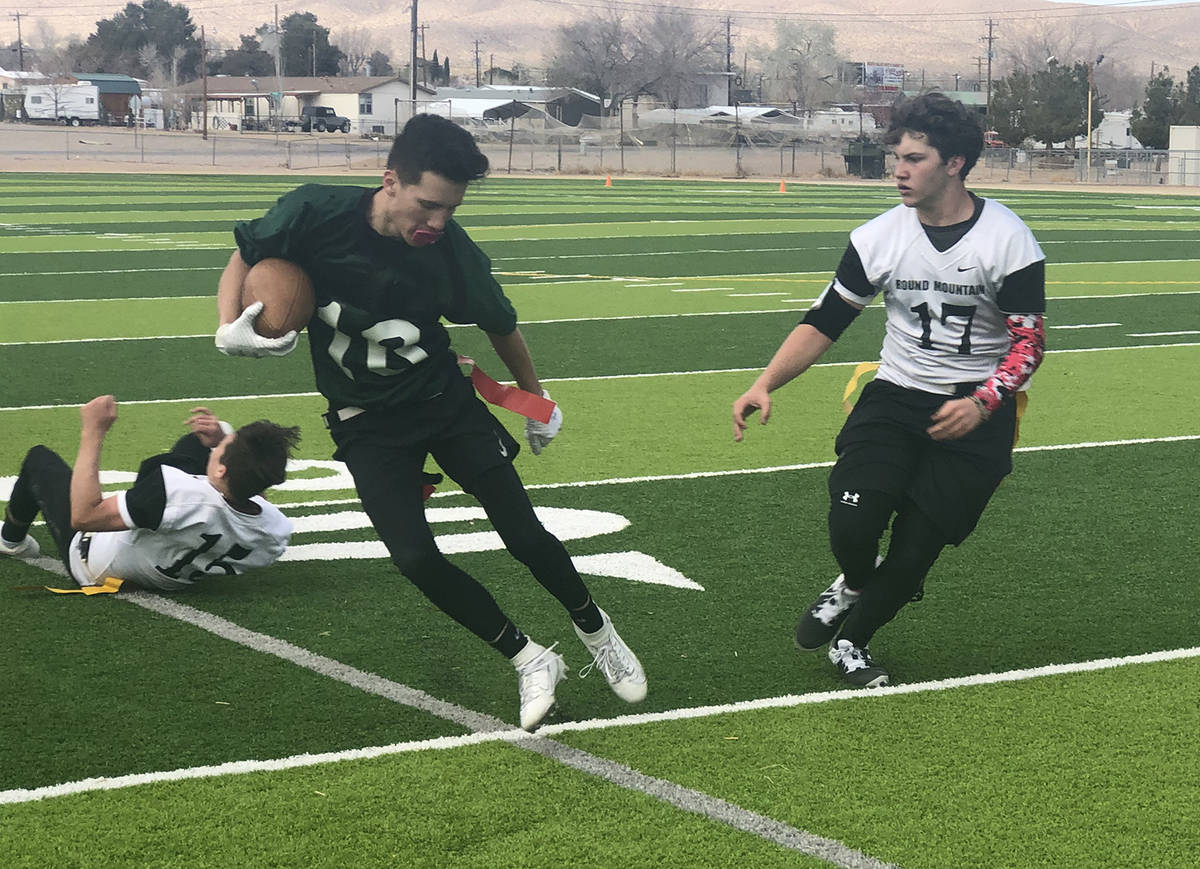 Tom Rysinski/Pahrump Valley Times Noel Gutierrez of Beatty, having eluded Round Mountain's Gavin Banks (15), heads out of bounds while being pursued by Nick Scraper of Round Mountain during a flag football game March 20 in Beatty. 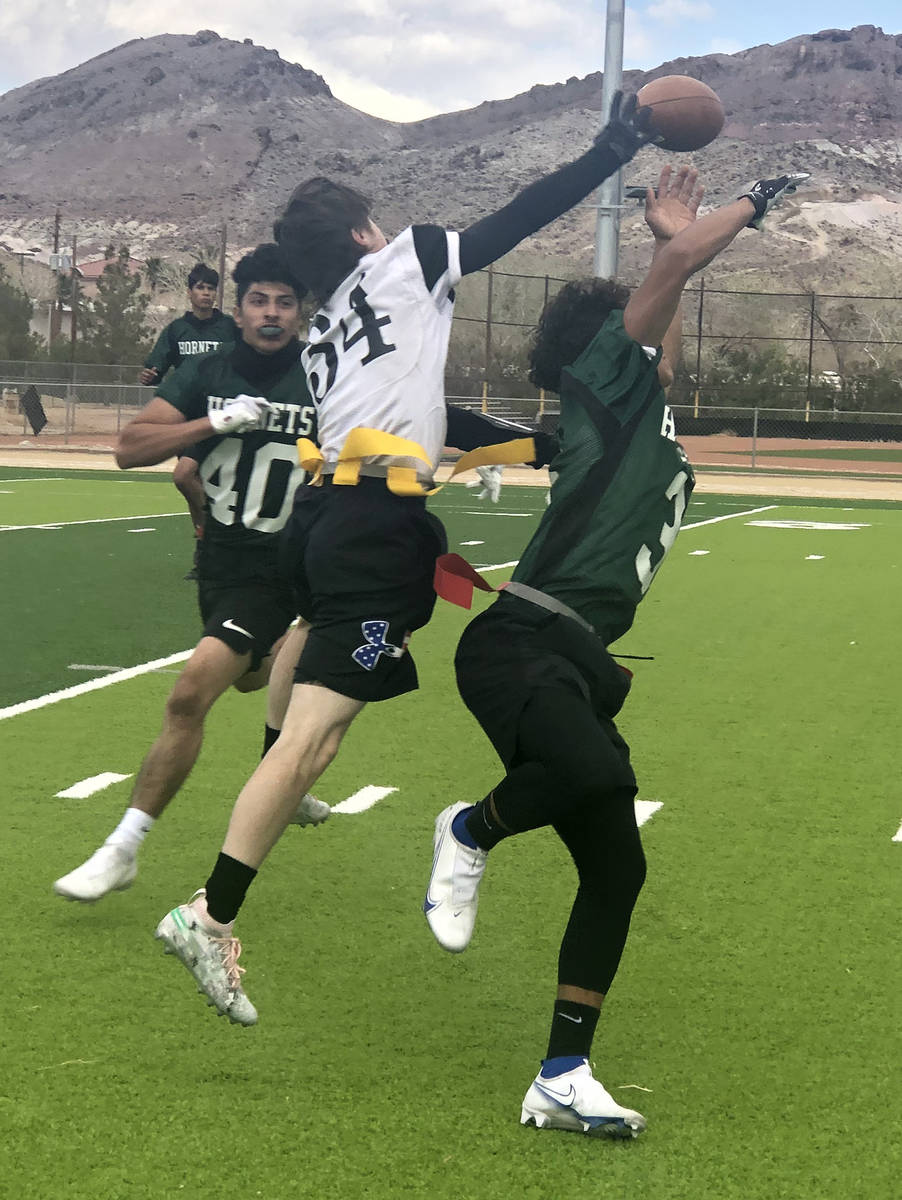 Tom Rysinski/Pahrump Valley Times Sophomore Gary Svoboda of Round Mountain goes up for a pass between Beatty defenders Adriel Oseguerra, left, and Ethan Mendoza during a March 20 flag football game in Beatty. 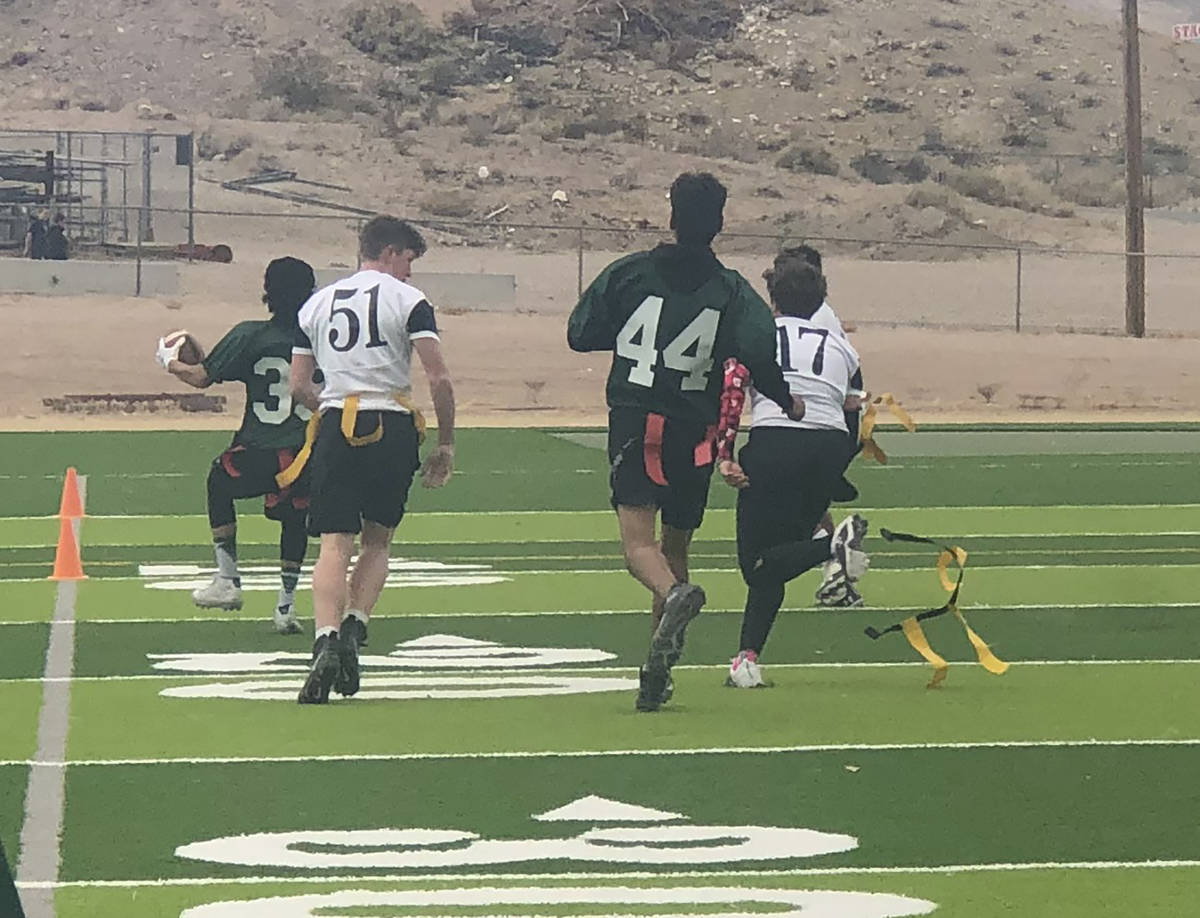 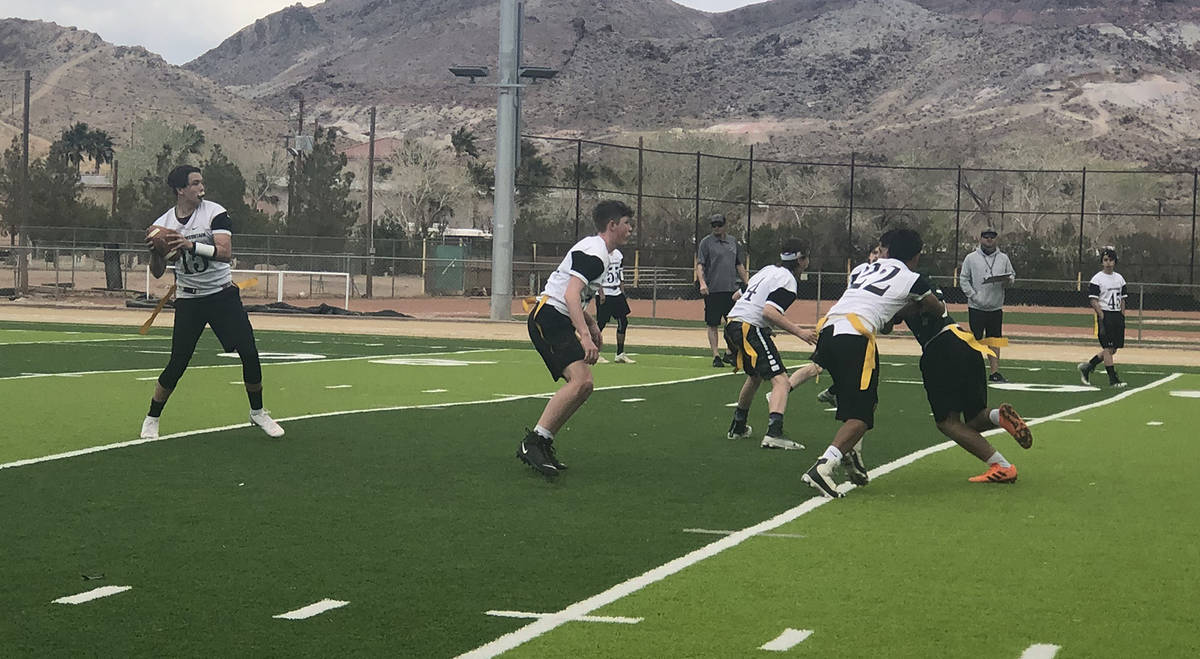 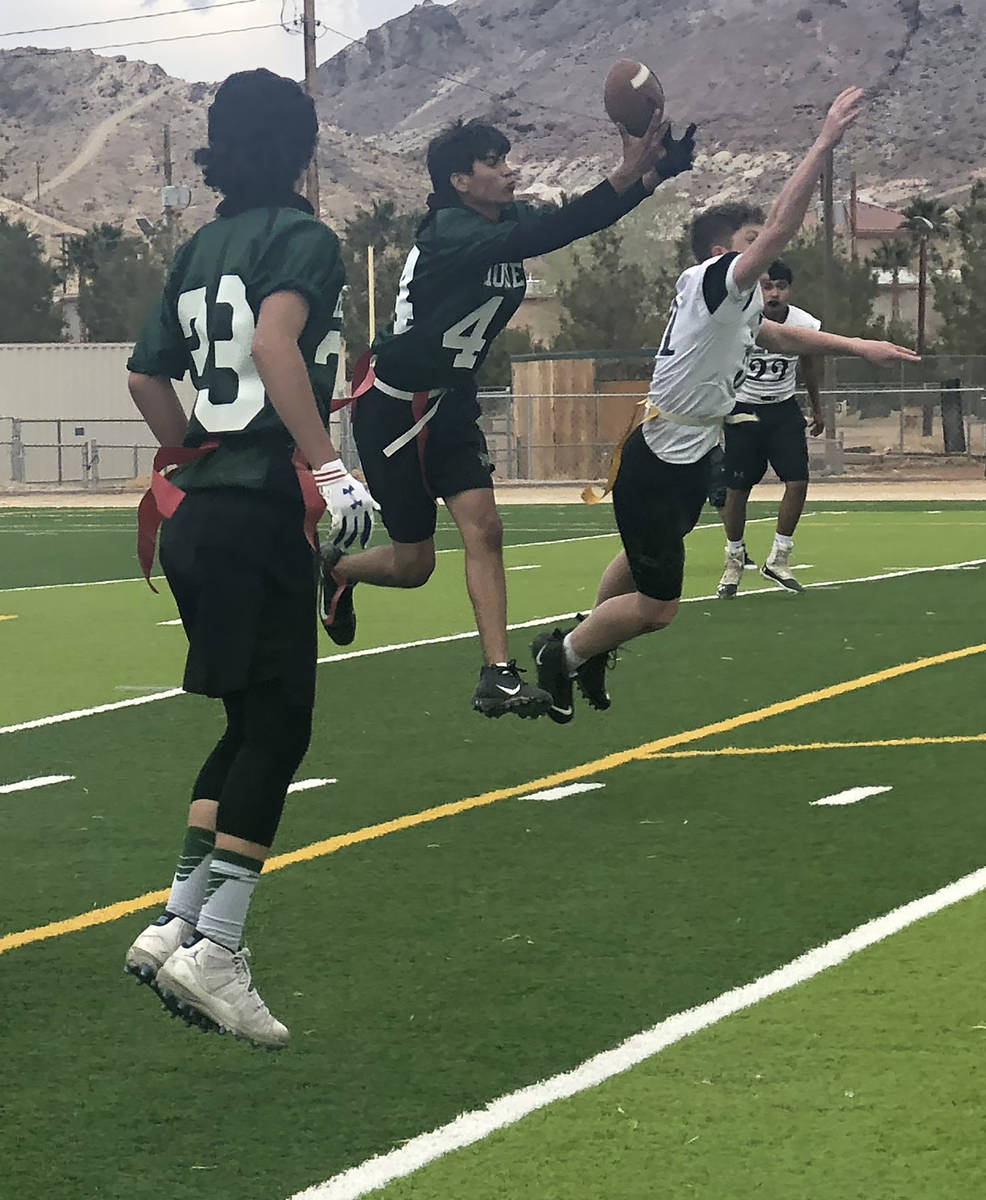 Tom Rysinski/Pahrump Valley Times Alfonso Sandoval of Beatty High School goes up for a reception during the Hornets' flag football game against Round Mountain on March 20 in Beatty. 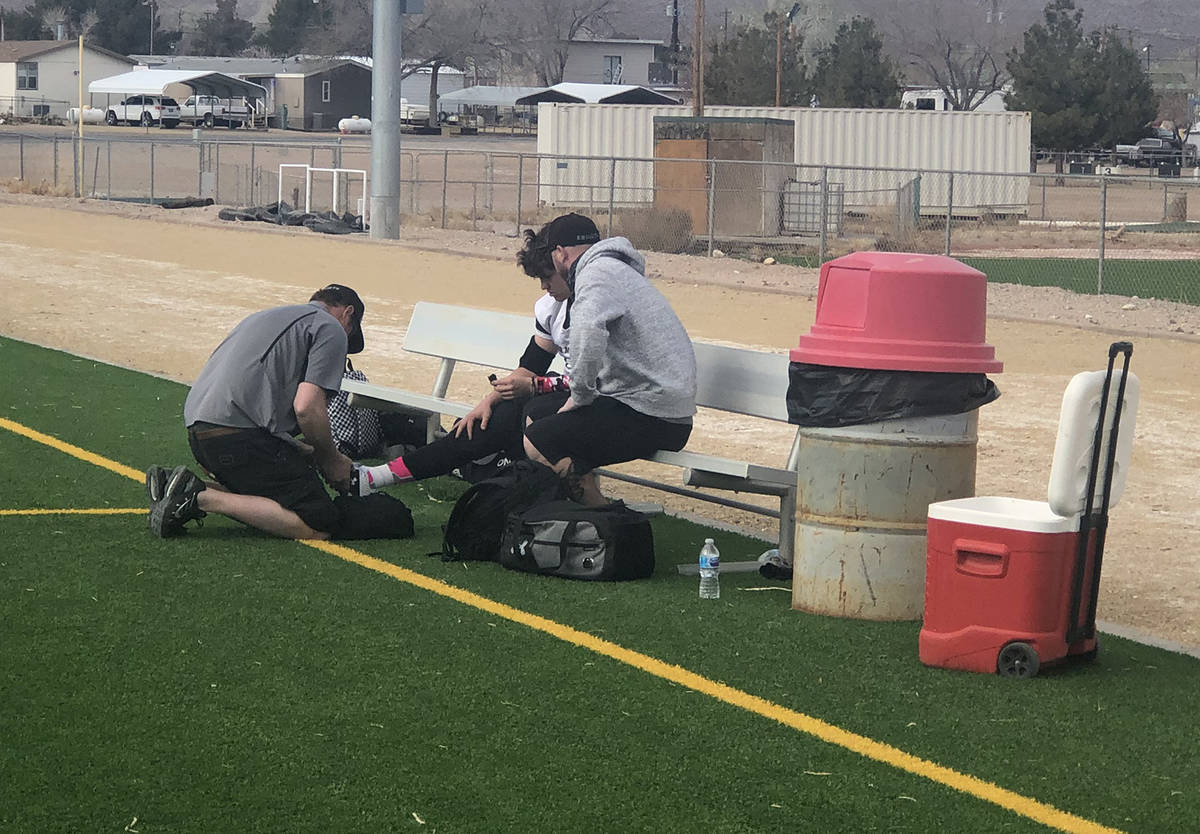 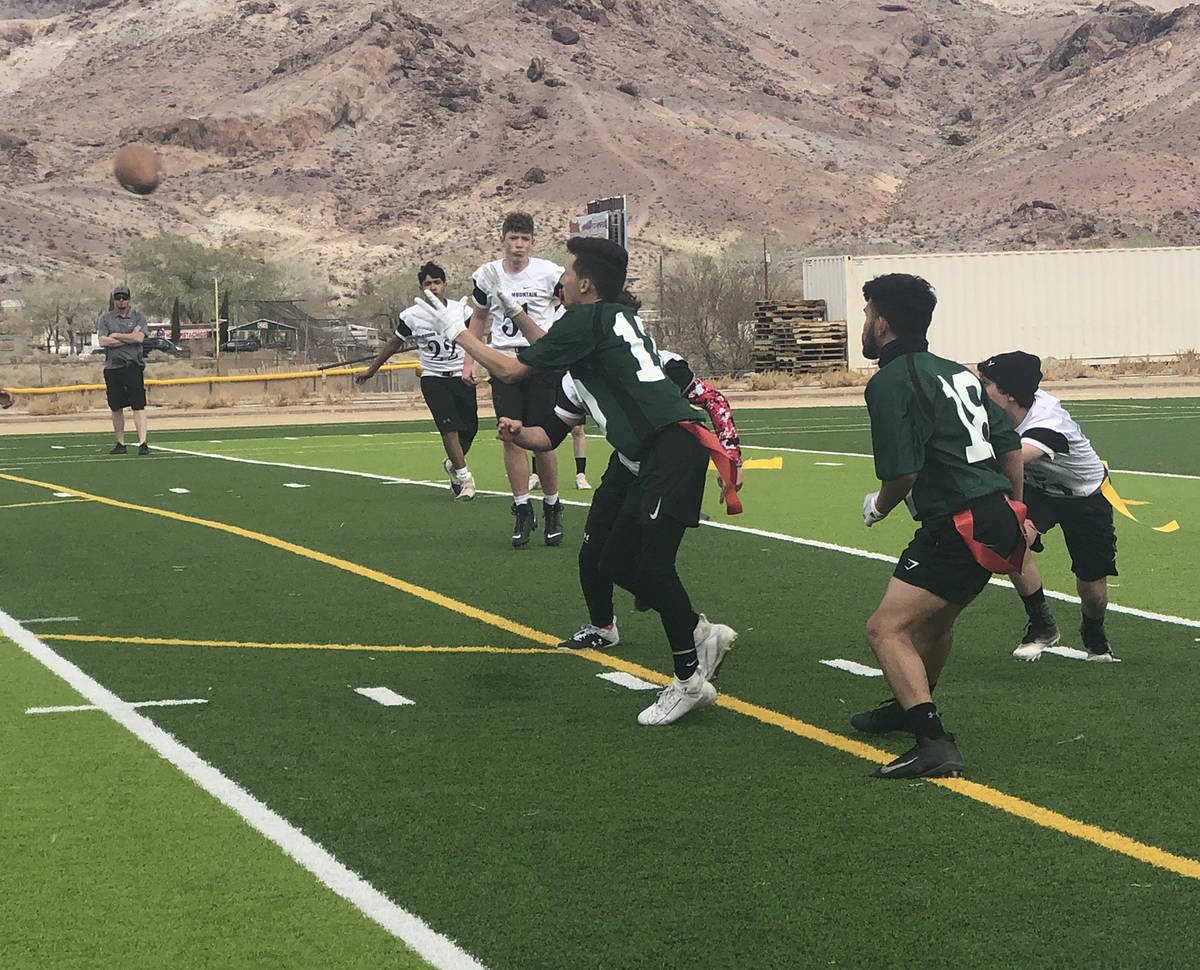 Tom Rysinski/Pahrump Valley Times Noel Gutierrez of Beatty looks in a pass during the Hornets' flag football victory over Round Mountain on March 20 at Beatty High School.

The news that Round Mountain and Beatty high schools would not be playing tackle football during the shortened “fall” season fell on many players like, well, a deflated football.

“I was kind of disappointed because I’m more of a physical type of player,” Knights sophomore Gary Svoboda said. “I’m more of an angry person.”

“I was really disappointed because I’ve gone through high school playing contact football, and I thought this would be like a breakout year for me,” Hornets senior Ryan Poynter said. “So this really upset me.”

“The first couple of days it was like a skeleton crew out here, then the kids heard it was flag,” Beatty senior Ethan Mendoza said. “We had a few more kids show up because it was flag. They found out they’re not getting hit, so it was like hey, let’s go try it out. What’s the worst that can happen?”

“More kids came out when they heard it was flag,” he said. “I think they were a little less scared. Hopefully, they’ll be more confident when tackle comes back.”

“I feel like a lot of the younger kids are kind of scared,” Poynter agreed. “They think if they play contact they’ll get hurt really bad.”

There are more differences in the two versions of football than just tackling vs. grabbing a flag.

“Seven-man flag is played on an 80 x 40 (-yard field),” Beatty coach and athletic director Leo Verzilli said. “You’re not allowed to extend your arms to block. You’ve got to get 20 yards for a first down because there’s so much passing. There’s a bunch of little things. One real thing is if you’re going to rush you have to start 5 yards deep behind the line of scrimmage, and no more than two people are allowed to rush.”

There’s more, designed to make sure the offense doesn’t have it too easy.

All of that, of course, leads to a wide-open game, with more passing than even traditional eight-man tackle football.

Everyone seemed to be having a good time, which came as a surprise to some of the players who weren’t sure what to expect from flag football.

“I really wanted to do tackle, but I’m having fun,” Svoboda said. “It’s just the people out here,” Round Mountain freshman Marquez Zamora said. “The refs, they just let us play. I thought it was going to be strict because there’s no contact. There’s no nothing.”

The same attitude could be heard on the opposite sideline.

“I’m actually having a lot of fun playing, and that really surprised me,” Poynter said.

“The thing that I didn’t expect is the difference in talking and playing around,” Mendoza added. “We’re way less serious. In contact, everyone’s quiet, but this is like playing in the backyard with your friends. It’s pretty chill.”

Very chill. There is no chain gang, the line of scrimmage for each set of downs is marked by a small orange cone on the sideline, and another cone serves as the first down marker. Then there are the officials, or, rather, then there are no officials, at least not the familiar ones in striped shirts.

“Some players just asked me if I wanted to do this, and I was like, ‘Why not?’” said Fabian Perez, who played three sports for the Hornets before his 2020 graduation and acted as one of the officials for the games. “It was pretty fun. I missed this.”

“This” was being around Beatty sports, not flag football. When asked if he would have wanted to play flag football when he was in school, a smiling Perez smiled, shook his head and said simply, “No.”

His officiating partner had a good reason to volunteer to monitor the game.

“My little brother’s playing on the team, so I came out to support him,” said Armando Gonzalez, whose brother, Moises, is a Beatty junior. “I like it. I mean, I prefer if they were playing tackle. He came out his first year to play, and he didn’t get to play tackle football.

“But it’s good. It’s an opportunity for the guys to come out. Instead of nothing, they have something to do.”

The Knights and Hornets played twice March 20 in Beatty, with the Hornets rolling to win the opener featuring their “A” team and winning a much more competitive second contest with their “B” team. But regardless of the results, the goals are being met: Players are out on the field playing the game instead of doing nothing, and the short season is serving as an extended training camp for the fall.

“I try to completely imitate tackle,” said Ryan Saladino, the athletic director at Round Mountain, who was chipping in as coach. “Coverages are the same, it’s just that when you get to a runner you can’t lay the wood. A lot of our kids, I see them wind up like they want to make the tackle and at the last minute you see them think, no it’s a flag thing. It’s pretty much the same, they’re learning the same things.”

Lynn, a senior, agreed that younger players can benefit from the experience of flag football.

“They can take all of the work that they’ve done, and they can take all the training that they’ve done throughout practice,” he said. “Obviously, it’s a whole different environment in tackle, but we’re still doing catching skills, we’re still doing running skills. The only thing that’s different is they’re going to be hitting, so yes, I think they have a lot to take from this season.”Saladino made it clear he has no intention of returning to the sidelines when the hitting begins again in August.

“Troy Davis will be returning in the fall, I’m just taking over for flag because this pandemic’s got a lot of people doing different things,” he said. “Troy Davis is our guy; Troy Davis knows X’s and O’s. We’re just out here having fun.”

And they were having fun. For an hour — with a running clock — nobody thought about the pandemic and the many measures what would have been necessary to play tackle football.

That was a key reason to play flag football. When the Nye County School District directed that flag football be played during the revised fall season set up because of COVID-19, Beatty and Round Mountain agreed. Meeting the safety protocols could have proved difficult, and with only six weeks to play the risks of losing a game or two were considered too great.

Like many of the Knights, Zamora was in middle school when Round Mountain had to cancel its football season because of a lack of numbers in 2019. Rebuilding the program is paramount in Big Smoky Valley.

“Our team is extremely young,” Saladino said. “We picked up a second junior this week, one sophomore today, and the rest are freshmen. We’re losing zero seniors, and we’re picking up, I believe, five eighth-graders. Our team will be young the next few years, but we have something to build on.”

What is happening is football players are on the field playing the game, not waiting for test results or hearing a game was canceled the day before it was scheduled. And they’re pretty happy about it.

“I’m having a lot of fun out there,” Mendoza said. “I miss contact, but flag’s pretty cool. It’s not bad.”