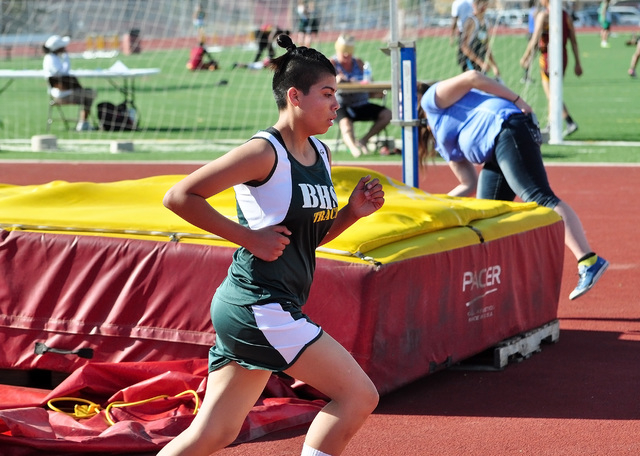 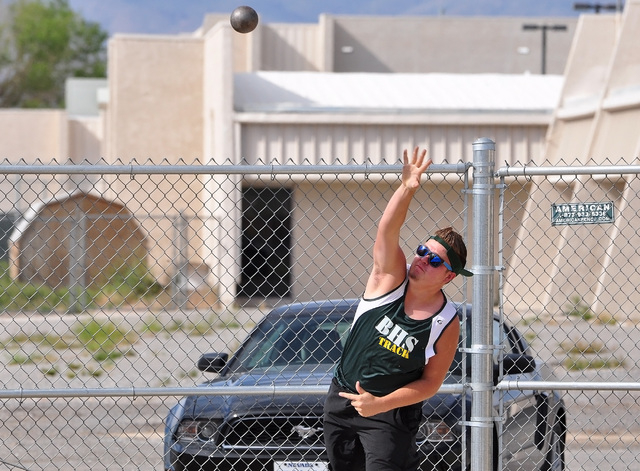 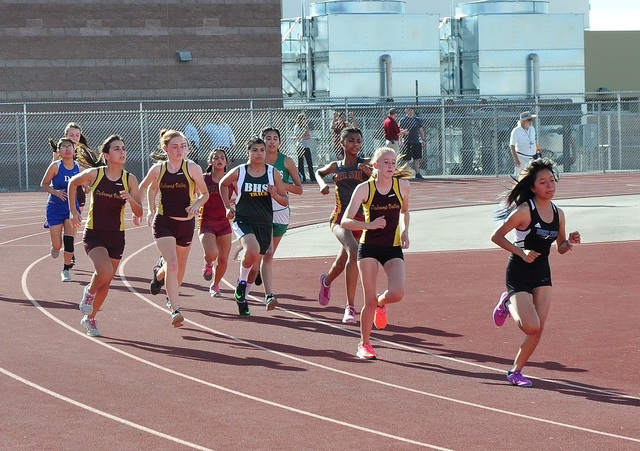 Beatty traveled down the road to Pahrump to get ready for their regional meet in May. The boys scored 11 points and the girls 15 and both teams finished in fifth place.

Lately Tonopah has been edging out Beatty in the bigger meets, but Hornets coach Ellice Dunsterville is not worried about it.

“We have not had full participation,” she said. “If you look at the stats for the Southern district and get rid of Spring Mountain, the boys are beating Tonopah. The girls are behind by five points. We have not been a full team, this is pretty much it today. I am just missing six.”

The coach said she came down to Pahrump to get times for her relay teams. She feels she has the depth needed to make a good showing at the regionals and beat Tonopah.

“We are pretty good in depth in for the long jump and triple jump for the boys,” the coach said. “For the girls I am trying to bring in new kids. Sprinter Alexia Gil is a good jumper, but she is not here today.”

Enrique Orozco, the fastest middle-distance runner the Hornets have, was not at the meet.

Dunsterville likes Orozco because he is well-rounded and brings home a lot of points at regionals.

“He is trying different things,” Dunsterville said. “He is working on hurdles and maybe in pole vault. My goal is to get as many people into state as possible.”

Lorraine Gjefle is the Hornets’ new throwing coach and she knows her boys and girls will get some points at state.

“They are all doing great and they are all working hard,” Gjefle said. “What is nice is they coach each other. I have high hopes for them and they improve every meet. I loved watching them come up when they tell me they PRed (Had a personal best). I would like all my throwers to improve 10 feet.”

She feels her throwers are at a disadvantage because of the work being done on the football field and track at the school. “Right now we are at a disadvantage with our discus because we are not able to throw off of our discus pad because they are working on that.” she said. “Nothing can go on that football field so we are working off a plywood platform at the softball field. It is different from practice to a meet and I am sure they feel that difference.”

She said Bryan Ortiz is the top thrower, followed by Robby Revert for the boys. Ortiz threw a 34-7 at Pahrump and Revert threw a 32-10.

Ortiz then threw 82-10 in the discus at Pahrump. He told the PVT that this was a new event for him.

He said the only thing holding him back is himself.

“I really haven’t been working at it,” he said.”I just have to push myself harder and harder. As far as discus, I just started and I have to work on technique.

As far as beating the Tonopah thrower Jordan Berkowitz, “I haven’t seen him throw, but I am up for the challenge,” he said.

He ended up throwing a 34, and Berkowitz threw a 36 earlier in March. In the discus, Berkowitz’s best is around a 95.

Revert said he is throwing around a 32 and is also up for the challenge.

“I think I can catch him by regionals,” Revert said.

In the hurdles Richard Dunsterville is their coach.

“The boys and girls are doing better than they think they are,” he said. “Christian Donaldson is doing better and each time he goes out he is getting better. Claudia Granados has done well for the girls.”

Dunsterville said Michael Olson was coming around in the sprinting too. He finished fifth in the 200 (24.2) out of 35 runners.

As far as long distance, Jasmine Pelayo did really well for the Hornets in Pahrump. She finished sixth (6:50.7) out of 14 runners.