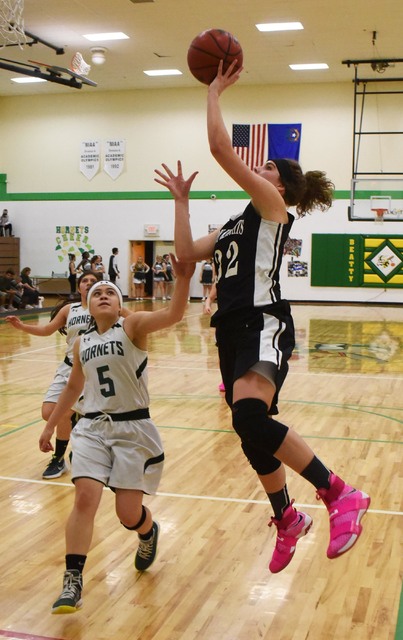 Lexi Gil (5) tries to keep Round Mountain’s top scorer, Alyssa Hanks, from scoring on Feb. 10. Gil is the top player for the Hornets and she knows her hands will be full against Round Mountain this Friday. Richard Stephens / Pahrump Valley Times 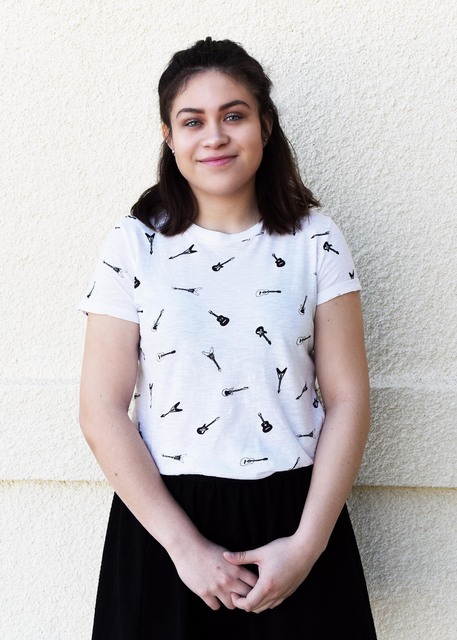 Lexi Gil will be the one factor that will have to be in rare form for the Hornets to advance in the playoffs. The lead scorer and top player for Beatty has been one of the reasons the Hornets are playing another playoff game.

“I’ve coached many good players in my years at Beatty and she is among those players,” Hornets coach Aimee Senior said. “I like coaching her because she has a love for basketball and wants to improve her level of play all the time.”

Gil has played all four seasons with Senior and leaves the team after graduating this year. She is a three-sport athlete, playing volleyball, basketball and running track.

“Basketball is my favorite sport,” Gil said. “I find it to be intense, I get more adrenaline from it and I am better at it than all my other sports. I have been playing it since sixth grade.”

She said she leads in scoring practically every game. In Wednesday night’s playoff game against Word of Life, she scored 28 points for a season high. Last year as a junior, Gil was second team all-Southern LeagueIV.

“She works hard on offense and defense,” Senior said. “I love that she gets upset when she doesn’t play well, because she knows she can do better, a quality that coaches like to see in their players. Lexi wants to know what she needs to do to improve herself and her game. She takes that advice and applies it.”

Gil is focused on beating the two top teams in her league, Pahranagat Valley and Round Mountain.

“Pahranagat Valley, they don’t have good outside shooters and will try to go down low,” she said. “We’ve got to keep them from scoring.”

She said her team needs to play at a higher level and not think about how they have done in the past with these teams. For her, when she gets into the playoffs it is a new season.

“We can’t play like we did last year, choking,” Gil said. “We can’t say that they are supposed to win because they are Alamo or Round Mountain. I have wanted to beat Alamo my whole four years here. I feel that we can beat them.”

According to her coach, Gil is a natural.

“She’s a coachable athlete with a want to win and that’s something you can’t teach players, so it’s great when an athlete naturally has that like Lexi does,” the coach said. “Not only do I enjoy Lexi on the court, but off of it as well. I’ll miss her a lot when she’s gone.”

The game was tied at the half 19-19. Then Beatty had come to life in the second quarter, outscoring Alamo 12-5. The Hornets then kept up with the Panthers in the second half, scoring 18 points to Alamo’s 20 and coming within a basket of winning the game.

“Toward the end of the game, we were up by one point,” Gil said. “They had the ball and the last shot. They shot and I tried to stop the basket and get the ball but couldn’t. I am still thinking of that game and I want revenge.”

Will Gil get her revenge? The odds are not looking good. Gil and her team have to get by Round Mountain today at Sunrise Mountain at 3 p.m.

After graduation, Gil wants to leave Beatty to study photography or become a school teacher possibly.

“I really admire what Skylar Stephens (a photographer that teaches photography in Las Vegas) does and his work,” Gil said. “I like taking photos and trying to capture the right moment.”