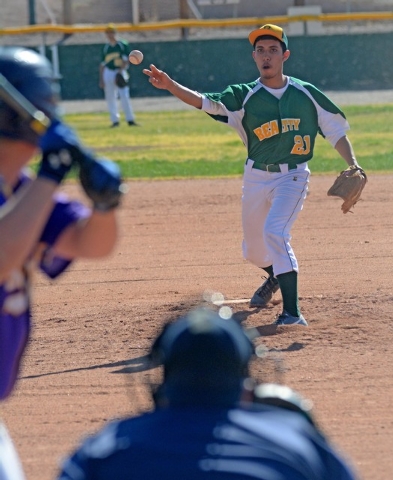 Beatty will have its first league game on April 17 and for Beatty Coach James Robertson that day could be delayed for another month and he would be OK with that.

Robertson said his Hornets (0-3 overall, 0-0 Division IV Central) need a lot of work. His pitching staff has given up 64 runs in three games.

“We have no pitching,” Robertson said. “I need guys that can throw. I had one pitcher who faced 15 batters and lasted only an inning.”

He also says defense needs a lot of work too because in that first game they only had six earned runs because his fielders made eight errors. The team had 16 errors in three games.

When you combine this with not being able to hit and being a team where not many have played baseball before, it could be a long season if something doesn’t change soon.

In the first game against Lone Pine only 17 batters made it to the plate and nine struck out.

Then the Indian Springs pitcher in the first game threw a no-hitter and Beatty only sent 15 batters to the plate. The team struck out 23 times in three games.

The news is not all bad, for this is only the first three games. Beatty has a month before league starts and a lot can happen to a team in a month.

Robertson said his team is trying hard and there are some bright spots. He said Hugo Mendoza can play third and he plays catcher and he has a good bat. He also praises Maggie Cathcart for trying so hard at second base.

“Hugo went 2-2 in the first game but didn’t hit against Indian Springs,” he said. “Cathcart already has some putouts at second.”

The team has five games this week and the coach remains optimistic that a pitcher will arise.

Beatty played a game at Trona, which was past deadline and will be at Big Pine today at 1 p.m. for two games. Then they are home on Friday against Sandy Valley for a doubleheader, which also starts at 1 p.m.