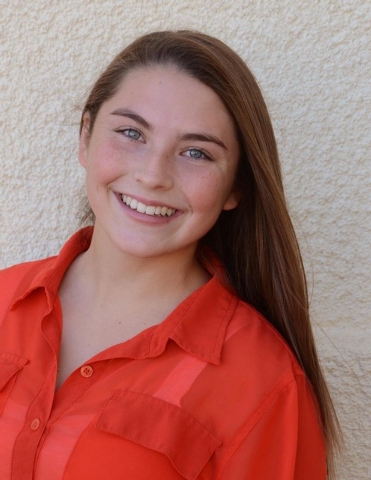 Maggie Cathcart is a three sport athlete from Beatty who this past season has blossomed into a great defensive volleyball player. In addition to volleyball, she plays basketball and baseball.

Aimee Senior, her junior high volleyball coach and basketball coach, said she really hustles on the team and can’t wait to have her again on a basketball court.

Out of the three sports Cathcart said her passion lies with volleyball.

“My favorite sport is volleyball. I really always loved the sport, but it took this year to realize my passion for it. I love playing the game. When I play I am all into the game,” Cathcart said.

During a game, she will rock back and forth and look like she is in a trance-like state. Richard Stephens, the Beatty sports photographer, took pictures of her and asked her why she did that. She said it helped her to focus on the ball.

Whatever the reason, during the Pahranagat Valley game in the regional playoffs, she was able to dig 20 balls.

At 4 feet 11 inches, she is not the most impressive volleyball player, but as they say good things come in small packages and her leaping ability is pretty good for her size. During games she is able to leap higher than the net. Typically the height of a girl’s high school volleyball net is 7 feet 4 1/8 inches tall. This means she can get some air.

“It was good to have him as a coach last year, but everyone thought he put me on the team because I was his sister. That would get to me, but I also got comments from people who graduated that said I deserved it because I had some hop in me. People who did say I didn’t deserve it might have been jealous,” she explained.

“I don’t have her as an athlete, but I do have her as a student,” he said. “She is very bright, always in a good mood and having her in class is a positive addition to the class. I have watched her do sports for the last three years. She is a good athlete and is very coachable. Watching her play at the varsity-level and knowing she is only 15-years-old is a feat in itself. I have nothing but good things to say about Maggie. She will be an asset to our athletic programs for the next few years.”

“Maggie is just a great athlete. She is very coordinated, practices diligently at whatever sport, stays in shape even during the off-season, and just has a wonderful personality,” he said.

Cathcart comes from a family with firm roots in Beatty. Her mother, Renee, graduated from Beatty High School along with all of her brothers and sisters. She took Maggie away briefly to live in Las Vegas, but moved back and they have lived in the town for the past seven years. Maggie enjoys the small town atmosphere.

“My mom loves this town. I love that small town feel of Beatty. Everyone knows each other in the town. We are all so friendly to each other. Everyone waves when they see each other. It will be sad to leave. I will miss the town and the sports,” Maggie said.

The young volleyball player said college is in her plans. She hopes to take her 3.5 GPA to the University of Nevada Reno and major in Criminal Justice. If that does not pan out, she plans on joining the U.S. Navy and upon getting out pursuing a career in law enforcement.

“My brother Robert is like a role model to me. He is a marine and he became a cop and I have always wanted to be a cop because I don’t like people to break the law. I heard good things about the navy,” Maggie said.

She said her other brother, Steve, is her teacher for math and it’s not awkward at all.

“He still treats me like his little sister, he is still mean to me. We both know how to get under each other’s skin and as his sister I have to do that in class. If I don’t get an ‘A’ in his class my mother will not complain, she will probably agree with it. He will not favor me at all and puts it all on me,” she said.

“He is the type that is hard on you. He encourages you to do things, but at the same time he does not push it too far. He does show up at my games. He and I usually go driving, we go shooting or play catch at the park. We would just go out into the desert and shoot and set up cans,” she said.

Another passion of Maggie’s is music. If she is not playing sports, she will be either playing a clarinet for the band or she will be singing for the choir. Both disciplines give her great amounts of joy. She said she has been singing all her life.

The singer is also active in the student council and is the sophomore class president.