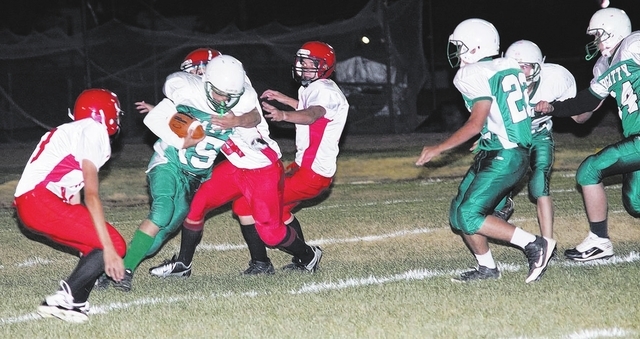 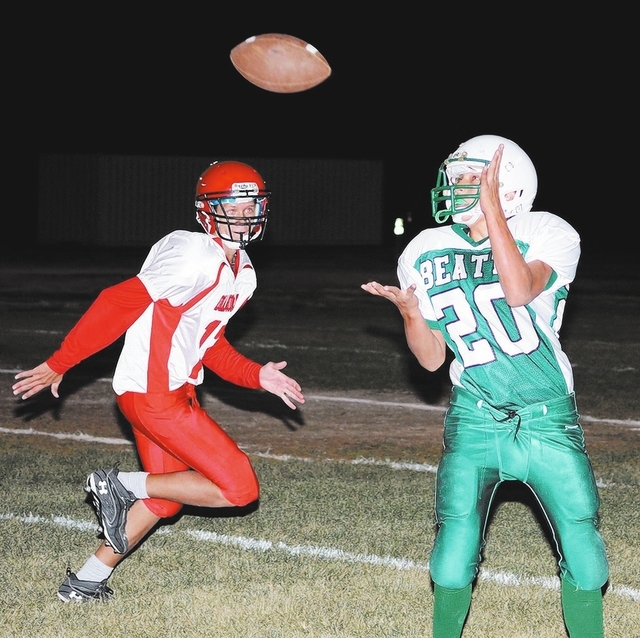 Time was running out for the Hornets and the score was 28-28 in the last minutes of the fourth quarter. Beatty had the ball about midfield and with just four minutes remaining to score.

The young Hornets team only has four experienced players, so Hornets Coach Leo Verzilli relied on the plays to teach his team how to manage the clock.

“You tell them about clock management and they don’t understand it. I have barely enough time to teach them how to play the game, so I had no time to teach them how to manage the clock,” he said. “We marched down the field on sweeps and outs. All plays that required the players to get close to the sideline. I explained they need to get out of bounds. They almost have to go out of bounds and they remember to do the out of bounds thing at the last minute. We also had all our timeouts and we used them all.”

The team got to the Round Mountain 35-yard line when they used their last timeout. There was about a minute to go. The play was a pass to Jacob Oseguera and he caught it around the four-yard line and all it took was a Luis Flores run to win the game, 34-28.

Beatty improves to 1-1 on the season in league play with Tonopah coming into town on Friday at 7 p.m. Tonopah is 3-0 in league play. There is a definite rivalry between the two towns and the play should be a heated confrontation.

Verzilli said he was also thankful the Littlefield brothers were gone, “Thank God,” he said. “I looked at last year’s film and those guys were big. Those brothers were good and so I am glad they are gone.”

Of course even with the two brothers gone, the Hornets still face a foe with multiple threats. This will be a big test for Verzilli’s team to see how much they learned since the Pahranagat Valley loss.

The Hornets will have to stop Matt Misener and the pistol offense of the Muckers. Misener has 80 carries with 927-yards rushing on the season. The Muckers average 117-yards passing per game and 335-yards rushing per game. Muckers have scored 223 points through 6 games (average 37.2 points per game). If that is not enough, the Muckers had some good news in the return of starting quarterback Jimmy Withers to practice. He had missed the last two games due to injury.