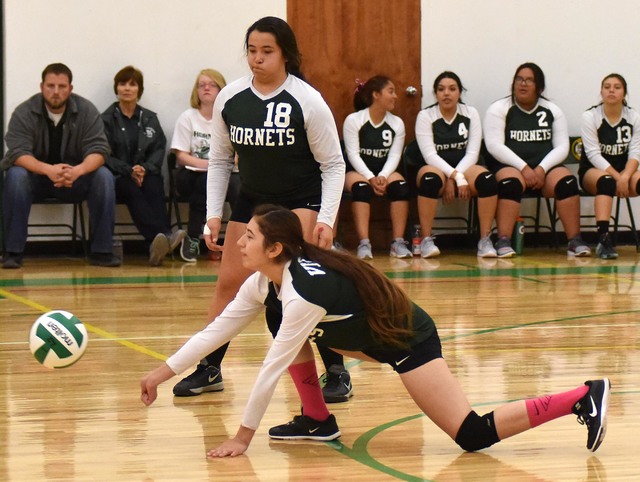 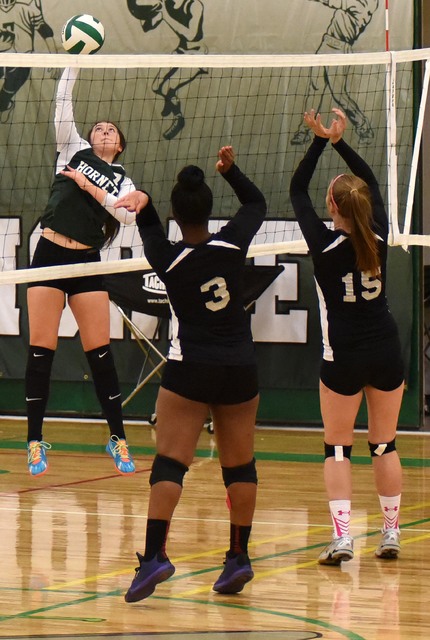 Richard Stephens / Pahrump Valley Times Senior Claudia Granados delivers a powerful hit against Word of Life earlier in the year. Beatty will depend on its seniors to get them through the state tourney.

Hornests coach Steve Sullivan said it was a hotly-contested match.

“Against Tonopah we started off with leads in all sets except the fourth,” Sullivan said. “For the majority of the time we would maintain a lead until we got toward the end. We still have a hard time closing out sets. There were a lot of intense moments during the match and I could see it on the girls’ faces.”

He said he could tell the girls were not going to lose that match.

“It was a hard-fought match and the girls stayed in it and were able to pull out the win,” he said.

Pahranagat Valley was a different story.

Sullivan said his girls had battled sickness all week and then right after the match with Tonopah they had to go again and play Pahranagat Valley for the regional title.

“I was informed by the officials that we had five minutes until warm-ups for the match against Alamo,” the coach said. “Fortunately I asked for 15 minutes, which they granted.”

Sullivan said he tried to rest his starters by frequent substitutions. In the end, though, the Panthers were too much and won in three sets, 25-5, 25-10 and 25-17.

The Panthers (21-6 1A Southern) won their fourth consecutive regional title and has 17 state titles, the last coming in 2014. They lost last year’s title match to Smith Valley.

The Hornets (18-4) want another crack at the Panthers.

“This week we are trying to make sure we get healthy while still having a challenging week of practice,” the coach said.

But he knows he has to get past Owyhee first.

“They are tough defensively and mentally,” Sullivan said. “Offensively, they focus on their 6-foot MB (middle blocker). “But with that being said, we are going to focus on us and try to find out just how great we can be.”

Beatty will depend on its seniors Anel Gamboa, Vanessa Gamboa, Alexia Gil, Claudia Granados and Bridget Vieyra to carry the team.

For Beatty, this will be the third year in a row that the team has appeared at the state tournament. They have not won a state title since 1992 and 1993. Beatty will face off with Owyhee at 3:45 p.m. on Friday at Damonte Ranch High School in Reno. The winner will play for the state title on Saturday at noon.