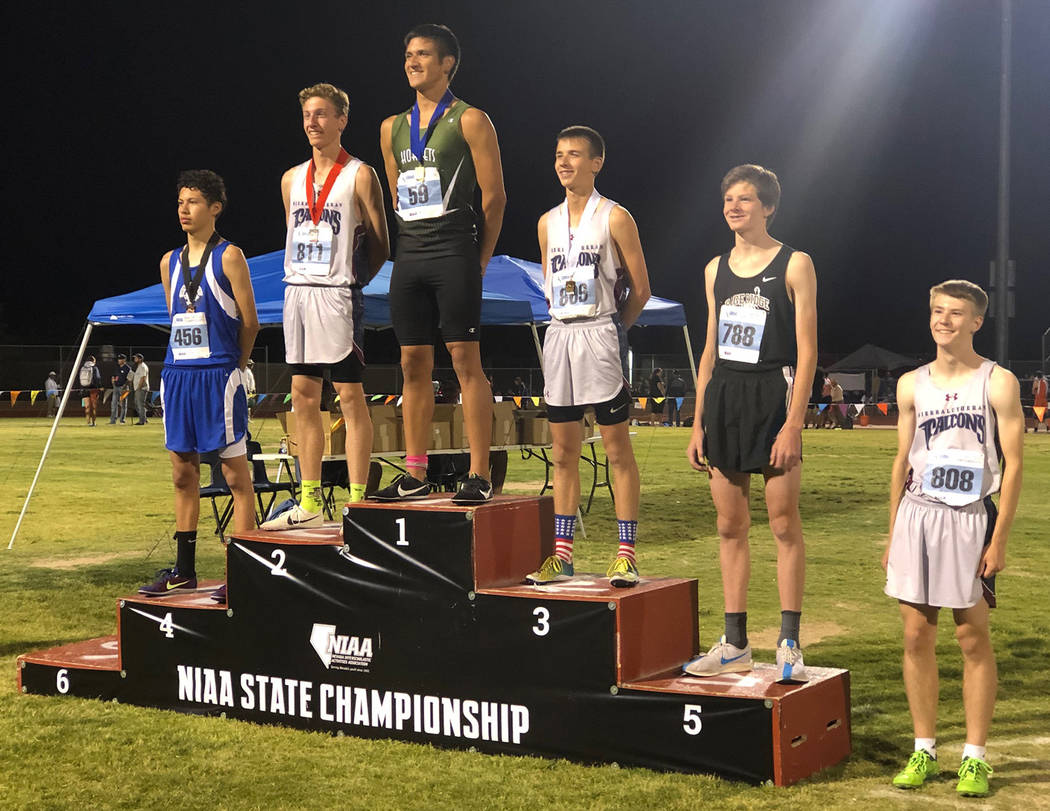 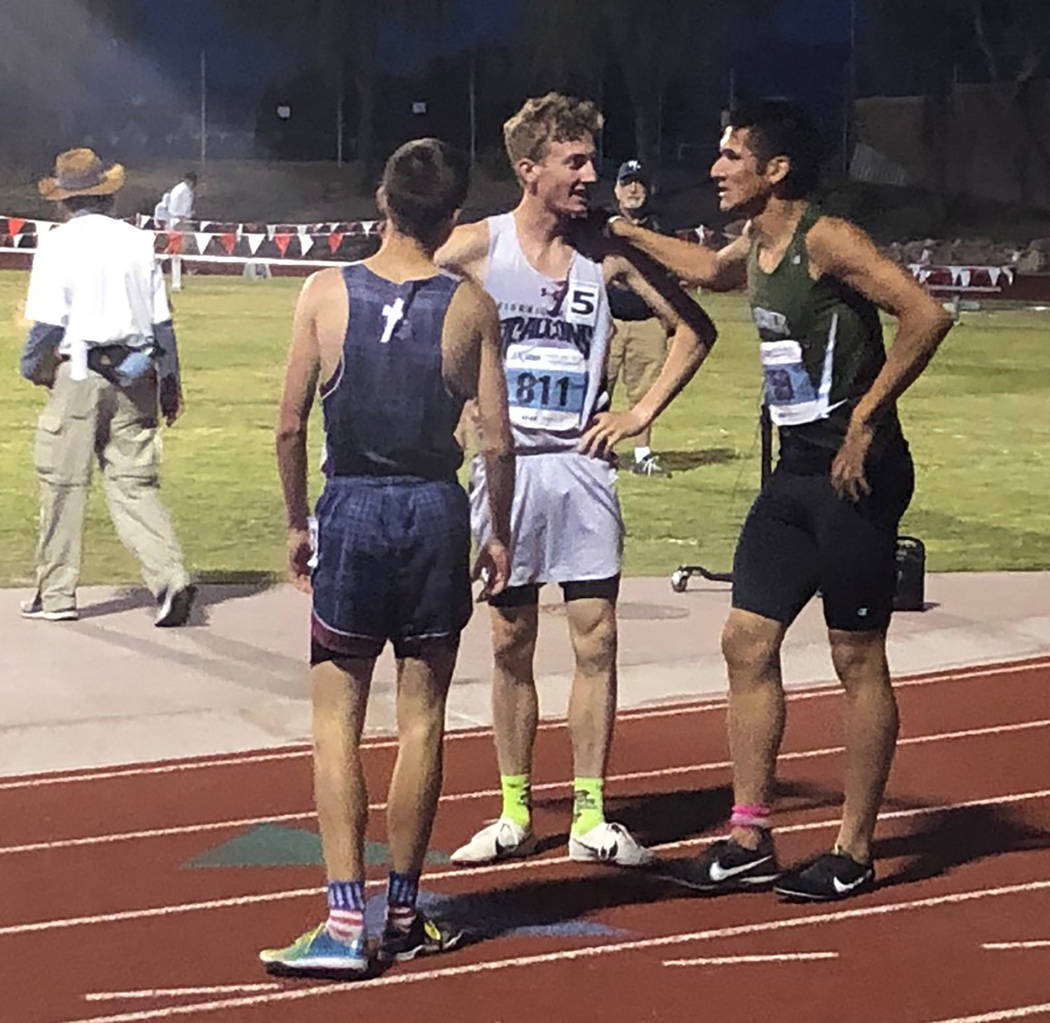 Tom Rysinski/Pahrump Valley Times Beatty junior Jose Granados, right, chats with Jared Marchegger, center and Teagan Hansen of Sierra Lutheran after defeating the teammates in the 1,600 meters in a personal-best time of 4 minutes, 29.08 seconds Friday night in the Class 1A State Championships in Las Vegas. 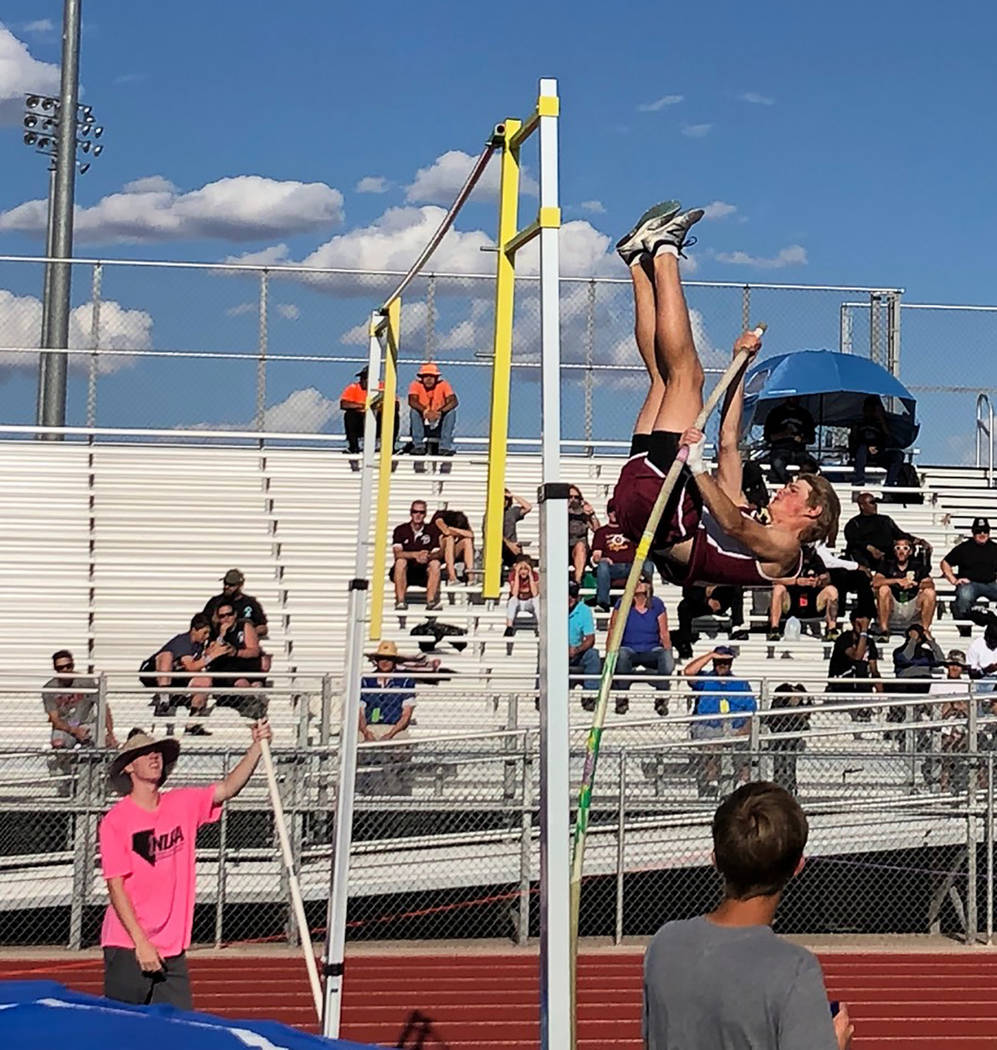 The Class 1A 1,600 meters figured to be one of the highlights of the State Track &Field Championships.

A year ago, Beatty’s Jose Granados edged Sierra Lutheran’s Jared Marchegger by the slimmest of margins, three-hundredths of a second. Throw in Marchegger’s improved teammate, Teagan Hansen, who took third a year ago, and it figured to be a clash of the titans.

And it did not disappoint.

The three came down the stretch almost literally neck and neck, with Granados crossing the line in 4 minutes, 29.08 seconds. Marchegger was less than a half-second behind at 4:29.42, while Hansen was just more than a second further back at 4:30.72. All three times were personal records.

The race unfolded pretty much as Granados had planned it in advance.

“Stay behind them, for the last 400 pick it up and at 300 maybe pass them, then from the 200 it was just going to be a full-on sprint,” he said. Indeed, the Hornets junior was behind the Falcons senior after the first lap and between the two Sierra Lutheran teammates after the second. He was basically even with Marchegger after the third lap, passed him with a bit more than 200 meters to go and then held him off at the finish.

“I feel amazing,” Granados said after the race. “I’m very pleased. I’ve got the school record under my belt now.”

Granados also ran the second leg of the Hornets’ 4 x 800 on Friday night, taking the baton in sixth place and surging to second, which his teammates held. Beatty’s quartet of Granados, Alan Sandoval, Alfonso Sandoval and Marcelo Garcia finished in 9:20.58, trailing only a Sierra Lutheran relay team that included Marchegger and Hansen.

While Granados was satisfied with those two efforts, he was less pleased with the 800. This despite the fact that he defended his state title in that event as well, routing the field by almost 12 seconds as he finished in a personal-best time of 2:00.62.

“I’m not too satisfied with the 800,” said Granados, who took the lead early in the race. “I have high expectations for myself. I don’t expect myself to be running 2s, I think I should be under 2.”

Barely an hour after the 800, Granados lined up for the 3,200, and he just didn’t have much in him. Marchegger won the event for the fourth time while Granados, who finished second in 10:11.12 last year, took third behind Hansen in 10:27.01, still his best time this season.

“I was worn out after the 800, and my legs were killing me. I don’t want to come up with excuses, but …,” Granados said. “From the second lap, my legs started cramping on me. I tried staying with them, but there was no way.”

That experience might have Granados rethinking running all three distance races next season. Marchegger, who finished second to Granados in the 800 and 1,600 last year, skipped the 800 for his senior season.

“My coach was talking to me about it, but I like running all three,” Granados said. “I don’t know.”

The Hornets’ other winner was sophomore Noel Gutierrez, who, after finishing fifth in the 110 hurdles Friday, did everything right in taking the 300 hurdles in 42.79. That was almost a second-and-a-half better than Pahranagat Valley’s Izzy Riera, who took second.

“He got a great start from the blocks,” Beatty coach Rusty Anderson said. “His endurance toward the end of the race enabled him to further his lead and win easily.”

The Hornets picked up more points from their 4 x 800 unit, as Granados, Alan Sandoval, Alfonso Sandoval and Marcelo Garcia finished second in 9:20.58, the state’s second best time all season in Class 1A. Beatty’s other three relay units contributed 12 more points, and with senior Max Taylor finishing sixth in the high jump by clearing 5 feet, 4 inches, they finished with 62.

That landed them in third place, 3 points better than Mineral County.

It wasn’t the best of days for Pahrump Valley’s track and field team, as the boys fell from third place a year ago to 14th this season in Class 3A.

The high jump brought in the most points for the Trojans. Although four of the competitors had cleared 6-4 at one point this season, none of them could match that at Desert Oasis. Senior Chance Farnsworth cleared 6-2 to finish third, with classmate Ethan Whittle taking fifth place at 6-0. Sparks senior James Renfrow won the event at 6-3.

There was some disappointment for the Trojans in the pole vault, as junior Grant Odegard suffered an injured hand when his pole splintered in half during warmups. After receiving medical treatment and returning with a wrapped hand, Odegard still finished fourth after clearing 11-3.

“Grant did receive five stitches in his hand,” Pahrump Valley coach Fred Schmidt said. “I think he will heal nicely.”

Otherwise, the best finish for the Trojans was junior Michael Sonerholm’s 4:36.27 effort in the 1,600, a personal best good for fourth place.

For the Pahrump Valley girls, the best finish belonged to senior Elaina Dattillio, who took fourth in the high jump at 4-8.

“I think the biggest message we got from state is that our girls team for next season looks to have a strong core group,” Schmidt said. “We only had two senior girls at state of the 12 qualifiers.”